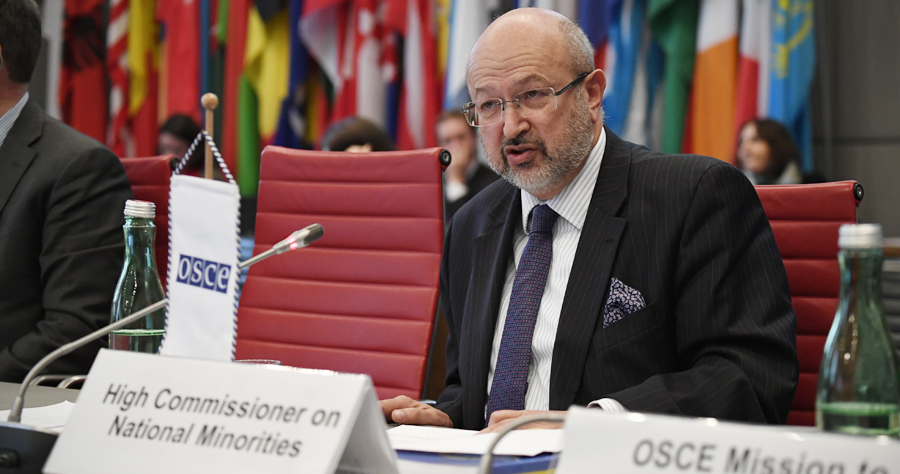 As delivered by Acting Deputy Chief of Mission Michele Siders,
to the Permanent Council, Vienna
November 16, 2017

The United States warmly welcomes High Commissioner Lamberto Zannier back to the Permanent Council, this time in his new capacity as the OSCE High Commissioner on National Minorities (HCNM). High Commissioner Zannier, thank you for your report and your important contributions to our collective security. We do regret that we did not receive your report sooner, which would have allowed more time for in-depth review, and in the future encourage your office to circulate reports earlier.

The HCNM plays a valuable role as we grapple with issues regarding ethnicity, language, and education, while respecting and protecting human rights and fundamental freedoms. The United States attaches great importance to the work of the High Commissioner’s office. The independence and objectivity of the office’s work over the years have been key to its integrity and success. We urge all participating States to avail themselves of your office’s assistance and expertise in addressing shortfalls in upholding our shared commitments.

The United States notes the release of The Graz Recommendations on Access to Justice and National Minorities and looks forward to discussing these and related issues at the Supplementary Human Dimension Meeting today and tomorrow. We appreciate HCNM’s work on the Serbian-Albanian /Albanian-Serbian, and Macedonian-Albanian / Albanian-Macedonian dictionaries. As you rightly point out, these are indeed very practical, tangible examples of HCNM’s impact.

We support your comment regarding the need to respect confidentiality in the pursuit of quiet diplomacy. One participating State knowingly misrepresented your recent comments regarding education issues in Ukraine. We are concerned that this does not contribute to the Permanent Council’s goal of rebuilding trust. A statement from your office clarifying your findings on this issue would be helpful.

The United States welcomes the information regarding your recent and future activities. Your predecessor engaged productively with the Ukrainian government and other institutions, including the Verkhovna Rada Committee on Human Rights, National Minorities, and Interethnic Relations. We urge the HCNM and other participating States to support Ukraine’s efforts to build institutional structures to fulfill its commitments regarding persons belonging to national minorities, and to promote more effectively the inclusion in society of all parts of its diverse population.

As you know, Russian occupation authorities in Crimea continue to ban the democratically elected representative body of the Crimean Tatars, the Crimean Tatar Mejlis, claiming it is an “extremist” organization. According to widespread reports, occupation authorities subject Crimean Tatars to physical abuse, and fail to investigate adequately reports of killings and disappearances. We call on Russia to end its occupation of Crimea, and to bring to justice those responsible for over a dozen documented unsolved disappearances of Crimean Tatars since its occupation began. This includes activist Ervin Ibragimov, last seen being thrown into a van by security forces in May of 2016. Crimean Tatar leaders and activists face arbitrary arrests; interrogation; politically-motivated prosecutions; arbitrary searches of homes, schools, and places of worship; and imprisonment. Other communities targeted for discrimination, harassment, and prosecution in Russia-occupied Crimea include ethnic Ukrainians who try to maintain their Ukrainian identity.

The United States very much appreciates the HCNM’s work in Central Asia. We encourage you to continue efforts on the regional Central Asia Education Program, which we believe will yield productive results for years to come. We also welcome your thoughts on the future of the HCNM’s activities in the region.

High Commissioner Zannier, HCNM has repeatedly demonstrated that successes are possible on complicated minority issues in Moldova, in particular in Gagauzia. We join you in calling on Moldovan authorities to start implementing the Strategy on the Consolidation of Interethnic Relations, including by adopting the Action Plan and providing financial resources.

In conclusion, the United States values highly the work of the High Commissioner on National Minorities. We look forward to working with you, High Commissioner Zannier, other delegations, the Austrian and Italian Chairmanships, the Secretary General, the Office for Democratic Institutions and Human Rights, and the Representative on Freedom of the Media to strengthen these important institutions. The United States will continue to defend their independence, mandates, and budgets.