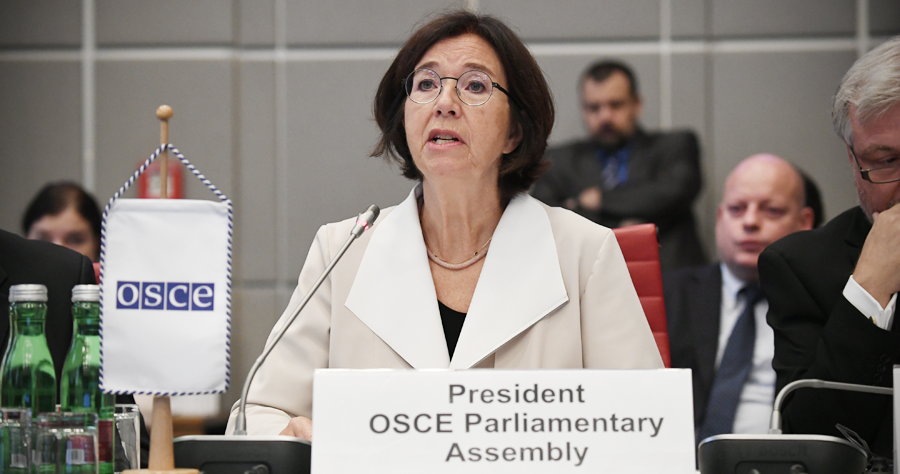 Response to the Address by the President of the OSCE Parliamentary Assembly, Christine Muttonen

I want to welcome OSCE Parliamentary Assembly (PA) President Muttonen here to the Permanent Council, and thank you very much for your remarks.

The United States recognizes the contributions that parliamentarians can make in promoting our common goals in the OSCE region, and I agree with you that the diversity of your members, and the connections that each one of you have to your electorates, contribute to important and lasting contributions to this organization. So thank you very much for highlighting that in your remarks.

As you know, Madam President, members of the U.S. Congress have been active participants and leaders in the Parliamentary Assembly. At present, Senator Roger Wicker of Mississippi serves as an OSCE PA Vice President; Senator Ben Cardin of Maryland and Representative Chris Smith of New Jersey serve as Special Representatives; and Representatives Robert Aderholt of Alabama, Sheila Jackson Lee of Texas, and Richard Hudson of North Carolina all serve on OSCE PA committees.

For many years, the United States has valued the Parliamentary Assembly’s work in a broad range of areas, in particular responding to Russia’s aggression against Ukraine, but also in seeking common responses to other serious concerns in the OSCE region. These include anti-Semitism and other manifestations of intolerance in our countries, the threat of terrorism, the challenges of migration, and the heinous crime of human trafficking. Several Parliamentary Assembly initiatives and resolutions have resulted in OSCE decisions and activities. We hope to continue that by introducing a draft Ministerial decision on combating child trafficking, which will be largely based on recent PA resolutions.

I also want to thank Andorra for hosting the recent Autumn Meeting, where we understand that there were useful discussions on cybersecurity, climate change, education, migration, and terrorism, as well as interesting side events on persons with disabilities serving in parliament and on the security and human rights situation in occupied areas of Georgia.

We also appreciate your professional leadership in the observation of the U.S. general election last November. The U.S. government, through our Mission here in Vienna and the Department of State in Washington, worked closely with the OSCE election observation mission to inform U.S. state and local officials about the OSCE and its role, and to facilitate access for its observers. We greatly value the OSCE’s important work promoting free and fair elections throughout the OSCE region. And we continue to strongly believe that all participating States should, in a timely fashion, invite the Parliamentary Assembly, ODIHR, and participating States, to observe elections, consistent with our commitments.

Madam President, in closing, let me also express appreciation for the excellent work that Ambassador Andreas Nothelle and the Parliamentary Assembly’s team here in Vienna have done, and personally thank you for acknowledging in your remarks the important contributions that the Helsinki Commission makes in Vienna and in Washington. We continue to benefit greatly, not just in the U.S. Mission here in Vienna but, I believe, here in these halls, from their expertise, their commitment, and their passion for upholding the Helsinki principles and strengthening the OSCE and the independent institutions which are part of it. So thank you very much for highlighting that in your statement.

Like the important contributions that our U.S. Helsinki Commission make with regards to the U.S. approach to the OSCE, we believe the Parliamentary Assembly ensures that diplomacy here is conducted in the context of democratic government, and that the views expressed by participating States reflect the values of the citizens we represent.

Thank you very much, Mr. Chair.