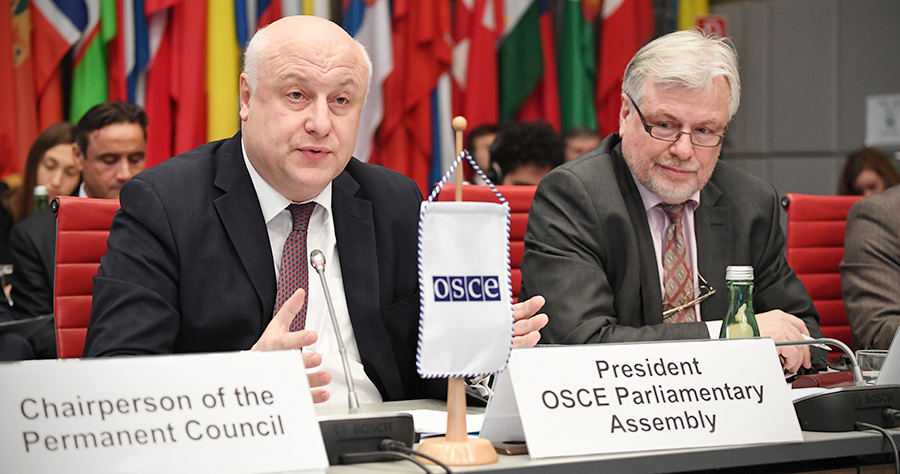 Response to the Address by the President of the OSCE Parliamentary Assembly, H.E. George Tsereteli

Mr. Chair, the United States shares the importance that you and Italy attach to a close partnership between participating States and the Parliamentary Assembly. Both the United States government and the U.S. Congress recognize the value and contributions of the OSCE PA. Members of Congress from both chambers and political parties regularly engage their fellow parliamentarians from other participating States through the OSCE PA. As you know, six members of Congress currently hold positions in the Assembly, demonstrating their strong commitment to the Assembly’s role in addressing the challenges to security and cooperation in our region.

Mr. Tsereteli, the United States welcomes the importance that you attach to the important role and contributions that your organization can play in election observation, and we continue to support your close collaboration with ODIHR. We also welcome the increased cooperation between the PA and the Permanent Council, including PA participation in various OSCE meetings and the PA Ad Hoc Committees.

Mr. Chair, to simply highlight just one concrete yet important example of the Parliamentary Assembly’s contribution to the OSCE’s work, at our Ministerial in December you will recall that participating States adopted a very important decision to combat child trafficking, a decision that was based on supplementary items adopted by the OSCE PA at its annual sessions in Tbilisi in 2016 and in Minsk in 2017. The OSCE’s work on combating anti-Semitism and intolerance, and on defending free media, was also inspired by earlier OSCE PA initiatives.

The United States wishes to thank you for sharing your views following your visit to Ukraine last week. We welcome the affirmation that the issue remains your number one priority in this upcoming year. Your support for the SMM, Ambassador Apakan, and – more importantly – the monitors that we have sent there to carry out this important duty, is welcome, and they can’t succeed without support from you and your fellow parliamentarians. At a minimum, we in this Permanent Council, together with you and your colleagues, owe it to our monitors that they have the support – political, financial, technical, you name it – to carry out this incredibly important function. Thank you very much for highlighting the importance you attach to this issue.

We note that several OSCE PA resolutions since 2014 have condemned the “clear, gross, and uncorrected violations of Helsinki principles” associated with Russian aggression against Ukraine and other neighboring countries, including your home – Georgia. The United States fully supports Ukraine’s sovereignty, independence, and territorial integrity within its internationally-recognized borders. We do not, nor will we ever, recognize Russia’s occupation and purported annexation of Crimea. And like the Parliamentary Assembly, we urge Russia, as the instigator of the conflict in eastern Ukraine, to order the forces it arms, trains, leads, and fights alongside to implement a full ceasefire, disengage its forces, and withdraw its weapons from the line of contact as proscribed by the Minsk agreements.

Mr. President, the United States also agrees with you – and the comments made by my Swiss colleague just now – on the important role that OSCE field missions play. The OSCE field operations remain the face of our Organization on the ground, where they contribute to regional integration, democratic reforms, good governance, and protecting human rights and fundamental freedoms. The United States agrees on the need to fund the OSCE adequately for the tasks we have given it. All OSCE participating States have a shared responsibility to provide the Organization with the leadership, guidance, and resources necessary to effectively address the areas of greatest need, and to support its highest priorities. Therefore, we share your view that it is essential to conclude – without further delay – a Unified Budget and scales of contribution for this year.

We also take note of the resolution adopted in Minsk last July, and the October 2017 report by the PA Ad Hoc Committee on Migration. We appreciated having Filippo Lombardi, chair of the committee, here at the PC last November. Complex migration issues are not easily resolved, but the United States firmly believes the OSCE is well placed to make important contributions on migration and refugee issues. But in order to do so we need stronger action and more effective coordination.

We look forward to seeing you and your fellow parliamentarians here next month for the PA annual Winter Meeting, and we eagerly anticipate your upcoming visit to the United States of America. We appreciate your comments on the role of civil society and non-governmental organizations, and wish to highlight that at last year’s annual session in Minsk, the OSCE PA encouraged participating States “to reinvigorate human dimension discussions … by avoiding restrictions on civil society participation, while noting that State-sponsored NGOs do not contribute to genuine dialogue.”

In closing, let me express appreciation for the excellent work of Ambassador Andreas Nothelle and the PA’s team here in Vienna. The Parliamentary Assembly ensures that diplomacy here is conducted in the context of democratic government, and that the views expressed by participating States reflect the values and commitments of our citizens.