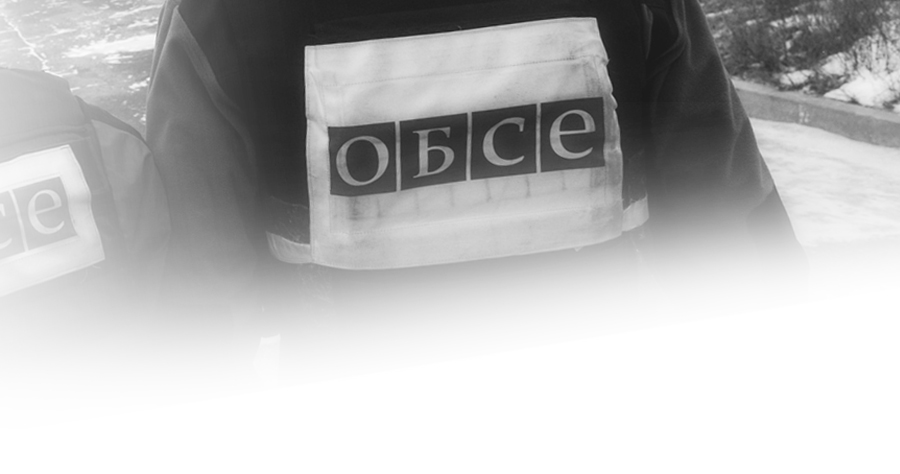 Black and white picture of SMM monitor in eastern Ukraine.

Thank you, Mr. Chair, and please let me start by thanking all of the colleagues around this room and across the OSCE for the many, many expressions of sorrow and condolences that we have received. We are extremely grateful for all that you have conveyed to us.

The United States is shocked and deeply saddened by the death of Joseph Stone, a U.S. citizen serving as a paramedic with OSCE Special Monitoring Mission (SMM), when his vehicle struck an explosive in separatist controlled territory in eastern Ukraine. We extend our deepest and heartfelt condolences to his family, friends, and loved ones, and we wish a quick recovery for those injured in the blast. This death underscores the increasingly dangerous conditions under which these courageous monitors work, including access restrictions, threats, and harassment.

The United States calls for a thorough and impartial investigation into this tragic incident, and demands that all those responsible be held to account for their actions. The United States conveys its full, unwavering support to the brave women and men of the Special Monitoring Mission to Ukraine, and reminds the Council that the SMM’s mandate requires full, safe, and unhindered access throughout the entire territory of Ukraine, including the territory not under Ukrainian government control. We demand that this access be guaranteed on the ground and provided without caveat, hindrance, threat or delay. The United States condemns any attempt to harass or intimidate SMM monitors or prevent them from carrying out their duties.

Ambassador Apakan, we are deeply appreciative of the actions you and your fellow members of the SMM took to respond to this tragedy, and we share your commitment to the brave men and women serving in this mission. The SMM has been facing an unprecedented rise in acts of intimidation, harassment, and efforts to delegitimize its work in the eyes of the public, acts primarily committed by combined Russian-separatist forces. It is imperative that all parties on the ground provide the mission with free, unfettered, and safe access throughout the entire territory of Ukraine.

We once again call for the marking, fencing, and removal of landmines, unexploded ordnance, and improvised explosive devices – in compliance with the Trilateral Contact Group’s December 2015 decision on demining. According to the SMM, progress on demining has stalled for months, greatly limiting the SMM’s access and endangering its monitors. A growing number of civilians have been killed or maimed by mines and unexploded ordnance in this conflict. In this regard, we note that the SMM reported the road upon which Joseph Stone’s patrol was travelling was part of a regular patrol route; there were no signs, warnings, or other indications that mines or unexploded ordnance were in the vicinity.

Colleagues, on April 14, three years ago, Russia unleashed its campaign of aggression in the Donbas. The conflict has already cost more than 10,000 lives and displaced millions of people. Tens of thousands more have suffered grievous injuries, and many more are without water or heat because of ordnance-related damage to critical infrastructure. Three thousand men and women serving Ukraine in uniform have died defending their country.

The violence must be brought to an immediate end to avoid further suffering. We regret that Russia has once again failed to follow through on its commitments to uphold the ceasefire. After a drop in fighting over the Easter holiday, combined Russian-separatist forces appear to be back to business as usual, driving up ceasefire violations to over 1,000 per day. This requires more than just another temporary silence on the contact line – it requires a real and sustainable ceasefire, disengagement along the line of contact, and a withdrawal of heavy weapons. Only a visible, verifiable, and irreversible improvement in the security situation will allow for progress on the remaining elements of the Minsk agreements.

Russian aggression against Ukraine is not limited solely to the Donbas, but continues in Russia-occupied Crimea, where Russia has sought to silence any voices that do not mimic Moscow’s rhetoric and lies regarding the peninsula’s status. We call on the Russian authorities to allow a Ukrainian consul access to Ruslan Zeytullaev, who was convicted of participation in a so-called “illegal organization” in June 2016 and received a twelve-year prison sentence this week. Mr. Zeytullaev has been on hunger strike since April 4 in protest against the persecution of Crimean Tatars and Russia’s practice of transferring political prisoners – including himself – from Ukraine to Russia. We are concerned about Mr. Zeytullaev’s well-being and call for an independent medical examination. We strongly welcome the April 19 decision of the International Court of Justice, which orders Russia to “refrain from maintaining or imposing limitations on the ability of the Crimean Tatar community to conserve its representative institutions” – a ruling that applies to the Crimean Tatar Mejlis – and also to “ensure the availability of education in the Ukrainian language.”

Russia’s aggression against Ukraine has shaken the very foundations of security and stability in Europe, and is antithetical to achieving a Europe that is whole, free, and at peace. The United States affirms its staunch support for Ukraine’s sovereignty, independence, and territorial integrity within its internationally-recognized borders. We do not, and will not, accept Russia’s efforts to change the borders of Ukraine. We join our European partners in affirming that our sanctions on Russia will remain until it fully implements the Minsk agreements, and Crimea-related sanctions will remain until Russia returns control of the peninsula to Ukraine.