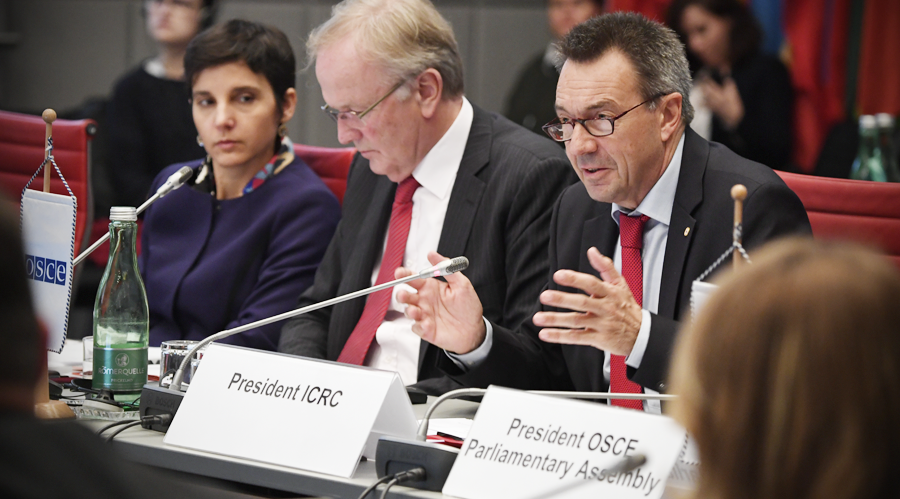 I would like to start by expressing our sincere gratitude to President Maurer for his remarks and thoughtful recommendations on behalf of the International Committee of the Red Cross. We first met in Washington several years ago in our previous capacities. It has been a real pleasure to see you and your success in your new role at ICRC, and to welcome you today. You are in many ways you and your team are guardians of human dignity, and of what is most fundamental to our humanity, and we very much value the work that you and ICRC do.

The United States deeply appreciates the efforts the ICRC has made in situations of armed conflict around the world, and takes particular note of its work to provide millions of Syrians with clean water, food, and essential household items, and to help safeguard the rights of affected civilians. Yet the crisis in Syria continues to worsen. Syria and Russia’s airstrikes, including attacks on hospitals and aid convoys, attacks like the one yesterday on a school in Idlib, and the besiegement of cities and towns, have resulted in widespread death and injury while preventing essential humanitarian aid such as food and medicine from reaching those in need. The United States repeats its call to hold accountable those responsible for these attacks.

The ICRC’s mission – to protect the lives and dignity of victims of armed conflict and violence, and to provide them with assistance – remains as relevant today as it did at the organization’s founding. This is true in Ukraine, where Russia’s intervention has created a conflict that has claimed the lives of more than 9,600 people and wounded 22,000 more. The conflict has displaced as many as 1.8 million people within Ukraine, and forced more than 800,000 refugees to flee to neighboring countries. Reports by the Special Monitoring Mission to Ukraine have shed light on the hardships faced by those living in conflict-affected areas: the risk of getting caught in the crossfire or hit by shelling; the perils of landmines and unexploded ordinance; the long waits to cross from separatist-held to government-controlled territory and back; interruptions to power, gas, and clean water supplies; and obstacles to receiving humanitarian assistance.

We recognize the indispensable contributions the ICRC is making to alleviate the suffering. We thank the ICRC for being ready to repair the footbridge at Stanytsia Luhanska — the sole civilian crossing in all of Luhansk. Repairs to the bridge, however, cannot be completed until after forces disengage from the area. The ICRC has also stepped in to stave off a serious humanitarian emergency in the conflict zone. When the power supply to a water utility was cut on September 26, jeopardizing clean water supplies to more than 600,000 people in Luhansk, the ICRC made payments to ensure the water was turned back on. We note, however, that the ICRC cannot and should not continue to pay utility bills indefinitely. Russia and the separatists it backs have agreed in the Trilateral Contact Group to make the arrangements necessary to ensure that debts to utility companies are paid, but have failed to act. Unless they do, a water crisis is all but certain to recur as water sources in the immediate area are insufficient to meet demand. The ICRC and other aid organizations cannot truck in water; it is prohibitively expensive – and even more challenging because there are no vehicle crossings in all of Luhansk oblast. We note agreement by the Normandy leaders to re-open the crossing point at Zolote, and call on the Russia-backed separatists to fulfill the promise they made months ago in the humanitarian working group to remove the impediments to civilian traffic.

Colleagues, more than a year has passed since the separatists imposed restrictions on the delivery of humanitarian aid in territories they control. It has been more than a year since Russian Foreign Minister Lavrov publicly declared that there should be an end to these restrictions, but little has changed. Only a few aid organizations are permitted to dispatch humanitarian assistance to those who need it. It is clear that civilians are being used as pawns in a political game. We call on the Russian government and the separatists to put the interests of the people of Donbas first, and to allow the ICRC and other organizations to work freely and unfettered.

I’d like to respond to the comments made by the Russian delegation today as well. The ICRC rightly declined to jeopardize its reputation by participating in the Russian Federation’s ‘white truck’ convoys — another of which crossed illegally into Ukraine’s territory today, after the Russian Federation refused to conduct these in line with the established international standards for the delivery of humanitarian assistance. Russia should spend less time drafting cynical statements like the one delivered today and more time following through on its commitments, in line with OSCE commitments and international law.

No less important is the ICRC’s work in seeking to protect civilians from the ongoing fighting. We are concerned about reports from the Special Monitoring Mission (SMM) that weapons continue to be placed in schools and near homes. While all forces are obliged to avoid putting civilians at risk, the SMM has noted “a higher concentration of ‘DPR’ positions in civilian areas compared with Ukrainian Armed Forces positions, which are mostly located outside of populated settlements.”

It is in the interest of all sides to minimize the damage done to critical infrastructure, on which the lives of people of the region depend. All forces should agree on areas where the consequences of combat could be catastrophic for those living in the Donbas, and refrain from aggression in those areas. One of the most active hotspots in eastern Ukraine is near a water filtration plant where 300 tons of liquefied chlorine is stored in pressurized tanks. If the tanks are ruptured by firing, a cloud of toxic gas could be released that would affect as many as 400,000 people. We encourage the ICRC to work with the Trilateral Contact Group on an agreement to protect these and other critical facilities.

Regrettably, the humanitarian costs of Russian intervention are not limited to Ukraine. That the ICRC’s efforts continue to be needed on the ground in Georgia is a stark reminder that this conflict remains unresolved. Russia’s holding of Duma elections in the Georgian regions of Abkhazia and South Ossetia, and the establishment and hardening of the administrative boundary lines in violation of the 2008 ceasefire agreement have a negative impact on the lives of people in these regions. Yet the ICRC’s work to help people in these communities mitigates the impact of the conflict.

The ICRC’s work in the South Caucasus — clarifying the fate of missing persons, visiting detainees, restoring family links, and facilitating the return of remains — is important to prospects for resolution of conflicts in the region. President Maurer, we share your views about the complementary work of the ICRC as a neutral humanitarian intermediary and the OSCE as peace negotiator, and encourage both organizations to work together. The ICRC’s work with the Minsk Group Co-Chairs to help Armenia and Azerbaijan exchange information on missing persons is a prime example of cooperation between the ICRC and OSCE and is a humanitarian measure the Co-Chairs have fully supported in meetings with officials at all levels.

Allow me once again, President Maurer, to thank you and the dedicated corps of humanitarian professionals of the ICRC for their tireless and lifesaving work. Your organization is making a difference for the better, and we fully support it. And thank you for the specific recommendations you have given us today about how we can support your work.