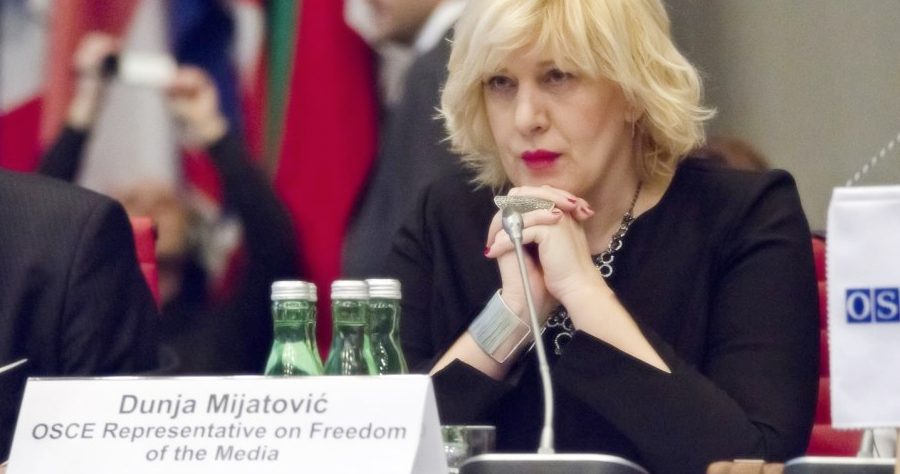 Ms. Mijatović, the United States is delighted to welcome you back to the Permanent Council. On behalf of the government and people of the United States, let me convey our gratitude and appreciation for your seven years of courageous advocacy in support of freedom of media and freedom of expression as the OSCE Representative on Freedom of the Media.

This week has provided a number of opportunities to speak to the contributions of the many women working to advance peace and security across the OSCE region in the context of International Women’s Day – but I think it is fair to say when we think of brave women working within our Organization to protect and defend human rights, you immediately come to mind.

For the last seven years, you have worked tirelessly to defend human rights and fundamental freedoms. You pushed back on governments that sought to silence critical voices, shut down free and independent media, and erode protections for journalists. You have worked to accomplish these goals together with other OSCE colleagues, including the director of ODIHR and heads of field missions, as well as the UN, the Council of Europe, and beyond.

Ms. Mijatović, you have faced harsh criticism and threats from repressive regimes, and from online trolls and bullies. You risked your own personal safety to travel to areas where media freedom is under threat – including to Crimea in the days when Russia was already laying the groundwork for its occupation, and when unidentified men in military uniform we came to know as Moscow’s “little green men” had already been deployed on the streets to stifle dissent.

In all of your efforts, you have done what we call on all participating States to do – to stand up and speak out on behalf of the principles and commitments we have collectively agreed to uphold.

Ms. Mijatović, you have been one of the first and most prominent voices to warn of deteriorating media freedom and freedom of expression conditions across the OSCE area. As early as 2010, you worked to draw attention to the worsening climate in Hungary. You visited imprisoned journalists in Turkey. In Russia, you have campaigned against the longstanding climate of impunity surrounding murderous attacks against journalists and the gradual and dangerous consolidation of state control over the media. Your visit to Turkmenistan in 2011 showed a willingness to engage in some of the most difficult conditions for media freedom. You have sustained that engagement over the course of your tenure, not only flagging issues and challenges as they arise, but also building bridges to lend the expertise of your office and the OSCE to the very governments that criticize you.

I also would like to commend your immense contributions in addressing the unique threats and abuse faced by female journalists. And I would like to thank you, Ms. Havlicek and Ms. Herbst, for speaking so directly about how real and serious this issue is. As we heard yet again, increasingly, female journalists are being singled out and attacked; they face threats of rape, sexual violence, harassment, and intimidation. As Representative on Freedom of the Media, Ms. Mijatović, you have shone a light on the issue, including by bringing female journalists to the Permanent Council today. You have urged governments to act against the threats directed at female journalists, and issued a set of recommendations on what OSCE States can do to address this issue.

To journalists jailed simply for doing their jobs, you have been a principled ally and tireless advocate. Today, more than a few reporters owe their freedom to your advocacy and engagement. You have also been one of the most important voices in calling for an end to impunity for violence against journalists. I would note in particular your work in 2013 with the Government of Serbia to establish a special commission to support investigations into unsolved murders of journalists – leading to the reopening of several cases and in at least one case a new trial.

Ms. Mijatović, at a time when many are calling for more restrictions on speech and controls on traditional and social media, you have worked vigorously to defend freedom of expression on- and off-line. You have been a shining example in standing up for the facts, even in the face of immense pressure from powerful and influential officials. Your searching, principled, and timely work on propaganda has kept the OSCE relevant and responsive to emerging challenges, all the while urging more speech, not less, as the solution. You have warned that threats to media freedom and freedom of expression can emerge anywhere, even in countries with a long tradition of upholding the freedom of the media. Your simple but powerful motto and reminder to states – “hands off the media” – will live on in the OSCE for years to come.

Ms. Mijatović, as you complete your tenure as OSCE Representative on Freedom of the Media, the United States joins its OSCE colleagues in recognizing your courage, your commitment, and your tireless advocacy to protect and defend freedom of expression and a free, pluralistic Fourth Estate from all those who seek to undermine them. As an OSCE community, we have an abiding interest in recognizing and advancing the vital work of those, such as yourself, who stand as brave defenders of the fundamental principles upon which the OSCE and a rules-based international order are founded.

Thank you, Ms. Mijatović, for your immense contributions to this Organization, to the cause of media freedom, and to the brave journalists and media professionals who you have worked to protect these last seven years. The OSCE is stronger for it, and the Office of the Representative on Freedom of the Media as an institution is better for it. The United States remains committed to working with the Chair and participating States to identify through a competitive process a fearless, determined, effective successor who will further strengthen the institution of the RFOM and build on your distinguished record of achievement in the years ahead.