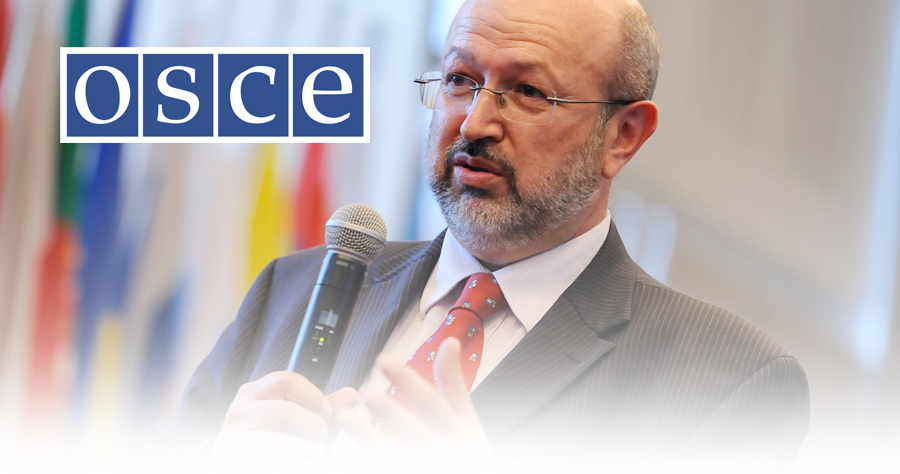 Thank you, Mr. Chair, and we too would wish to associate with your words of condolence at the top of the meeting.

Mr. Secretary General, the United States thanks you for your many years of service to the OSCE, for assisting participating States with the implementation of our common OSCE commitments, and for advancing the Organization’s comprehensive approach to security.

You began your tenure as Secretary General in 2011 – a time of optimism following re-affirmation of core OSCE principles and commitments in the Astana Declaration. Since then, you have helped steer the OSCE through some of the most difficult challenges it has faced in its forty-year history. Among these challenges is the deplorable situation in which too many OSCE participating States have failed to uphold their commitments to respect the human rights of every person.

In many states, governments have cracked down on exercises of the freedoms of expression and association by jailing reporters for their work, unduly restricting or shuttering non-governmental organizations, and taking other actions to stifle independent voices. Regression on human rights and fundamental freedoms underscores the need for continued, strong leadership in the Secretariat and the independent institutions: the Office for Democratic Institutions and Human Rights, the High Commissioner on National Minorities, and the Representative on Freedom of the Media.

Mr. Secretary General, during your tenure, the OSCE has faced what may be the region’s greatest crisis since the Organization’s founding: Russia’s aggression in eastern Ukraine and its occupation and purported annexation of Crimea. Russia’s actions contravene core principles enshrined in the Helsinki Final Act: to refrain from the threat or use of force and violent interventions in the domestic affairs of another participating State, to respect the sovereignty and territorial integrity of other States, and the inviolability of frontiers.

In response, the OSCE has mounted its largest and most complex field operation: the Special Monitoring Mission to Ukraine (SMM). This mission has required an unparalleled level of support from the Secretariat. It is imperative, Mr. Secretary General, that your successor take every action to ensure the Secretariat can expeditiously recruit qualified personnel for the SMM and provide the mission with the technical support it needs. At the same time, it is incumbent upon each and every participating State to second the qualified personnel on which the SMM depends. It falls to one participating State, the Russian Federation, to end the campaign of harassment and intimidation directed at the SMM.

While the OSCE has been steadily increasing its presence in Ukraine as the SMM approaches 700 monitors, the Organization has been forced to reduce its presence elsewhere. It is a sobering fact that, over the last six years, four OSCE field missions have closed – not because of fulfilled mandates, but as a result of obstructive actions by a handful of governments. At the same time, other field missions have seen their mandates limited considerably. Mr. Secretary General, we know you have worked tirelessly to maintain these missions and their mandates against pressure from a variety of sources, sometimes to no avail. We greatly appreciate your efforts. Your successor must ensure our field missions are able to continue their important work in all three dimensions, including by promoting confidence and transparency in crises and conflict situations.

Mr. Secretary General, we applaud the creative thinking and hard work you have put into addressing the challenges the OSCE faces. You have forged new partnerships between the OSCE and the United Nations, and engaged civil society and the private sector to achieve a multiplier effect on the OSCE’s outreach and impact. Unfortunately, some participating States have attempted to buck this trend, and have sought to proscribe OSCE engagement with others, particularly civil society. They have also rejected suggestions, such as live streaming Permanent Council sessions, to make the OSCE more transparent.

The OSCE has shown that it can be dynamic and responsive to new security challenges and transnational threats, such as by becoming the first regional security organization to develop cyber confidence-building measures. Individual OSCE field missions and their staff members demonstrated great ingenuity and resourcefulness in helping their host governments cope with an unprecedented number of migrants and refugees. Moreover, the Secretariat has developed important practical programs to address threats from terrorism and to counter violent extremism. As the recent OSCE counterterrorism conference demonstrated, there is strong support for enhanced cooperation, particularly in regards to foreign terrorist fighters and de-radicalization, which we see as likely areas for further OSCE efforts.

Mr. Secretary-General, under your leadership, the OSCE rose to the unprecedented institutional challenge of marshaling expertise and resources to address the conflict that Russia fomented and continues to fuel against Ukraine. As a result, the OSCE was put in the headlines and on the frontlines of conflict management and international efforts to find a peaceful resolution to the conflict. But, the threats to peace posed by contraventions of foundational OSCE principles are not the only risks to the Organization. There is a real risk that the OSCE will be undercut and diminished from within by attempts to weaken its institutional integrity through challenges to established rules and procedures, or by depriving it of necessary resources and personnel. Each participating State bears responsibility for maintaining this Organization as an effective resource to help us all implement our shared commitments in all three dimensions of security. We must all provide the OSCE with the financial and personnel resources it requires. It is unacceptable for some participating States to call for more work to be done while failing to provide funding; some even fail pay their annual dues.

The United States would like to underscore that it will work with the next Secretary General, as well as the current and future Chairmanships, to uphold the guiding principles enshrined in the Helsinki Final Act, and strengthen the Organization institutionally for the challenges ahead.

Secretary General Zannier, the United States deeply appreciates your service to the OSCE. Your significant contributions to this regional security organization uniquely spanning countries from Europe, Central Asia, and North America have helped to maintain the rules-based international order of which the OSCE is an irreplaceable part.

Lamberto, we thank you once again for your leadership, and wish you all the best for the next stage in your career and personal life.