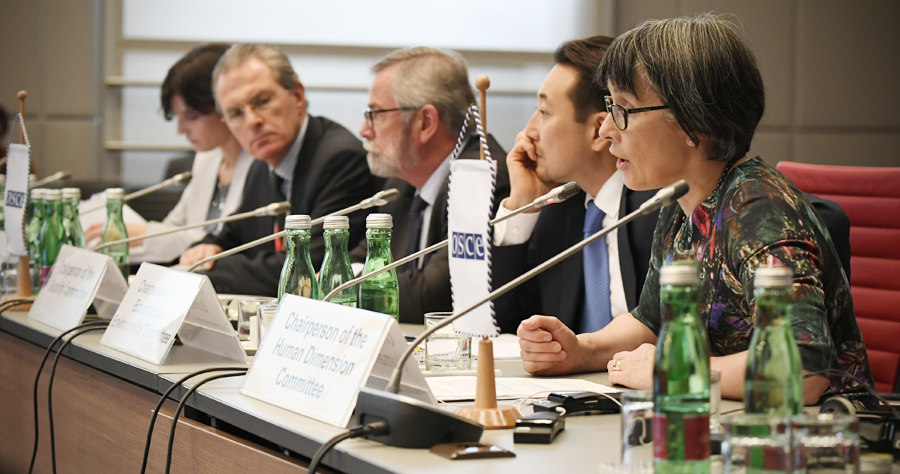 Response to the Presentations by the Three Committee Chairs

The United States joins other delegations in expressing its appreciation to each of the distinguished Chairs for their leadership in guiding our Organization. The OSCE’s comprehensive concept of security is embodied in your committees’ work and remains the foundation upon which our regional security is built.

Ambassador Kongstad, contrary to some of the views that have been expressed here today, the United States strongly appreciates the inclusive and comprehensive approach that you led as you chaired, together with others from Norway. We believe the Security Committee has appropriately and correctly focused on our collective security challenges. And thank you very much for that. You consistently challenged us to take an inclusive approach to security by focusing on the indispensable role that women play in preventing and managing violent conflict. And you have indeed succeeded in increasing awareness among participating States. This included discussions on violent extremism and mediation, and you were well aware that we ignore these issues at our peril, as terrorist groups have exploited gender to win recruits and evade detection. Women engaging as mediators and activists have put peace processes on firmer footing for approval and implementation.

Building on this work, we look forward to engaging constructively in negotiations on the Chairmanship’s draft Ministerial Decision on the role of women in the security sector. Mr. Ambassador, we also appreciate your unwavering commitment to the importance of human rights in the OSCE’s approach to the security agenda. You have clearly articulated how respect for human rights is not a distraction from the goals of security sector reform, intelligence-led policing, or countering terrorism, but rather it is vital, and at the central core, to the success of these efforts.

Turning to the Second Dimension, the United States thanks you, Ambassador Sarybay, for your presentation and for the active role that you and Kazakhstan have played in cooperating closely with the Austrian Chair in ensuring that economic and environmental issues remain priorities. The United States views these issues as fundamental to the OSCE’s commitment to long-term security. We welcome the discussions on economic participation and greening the economy, which form the basis for two draft Ministerial Decisions in the Economic and Environmental Dimension.

At meetings in Astana in June, and in Prague in September, a broad base of support for pursuing Ministerial Decisions on these topics emerged. Promoting economic participation in the OSCE is a wide-ranging effort that can support economic, societal, and structural security efforts in the OSCE region. The focus on greening our economies and fostering environmental cooperation has the potential to address urgent needs with long-lasting impact. In considering both of these drafts, we urge the inclusion of language on good governance, which forms the bedrock of our commitments in the Second Dimension. Ambassador, the United States supports these initiatives and looks forward to working constructively with you and the Austrian Chairmanship in negotiations.

Ambassador MacLeod, the United States thanks you and the United Kingdom for your principled and practical leadership of the Human Dimension Committee. Your focus on the grassroots impact of the Organization’s work is significant at a time when we see considerable backsliding by certain participating States, especially when it comes to commitments regarding human rights and fundamental freedoms. You have challenged us all by holding discussions with speakers on diverse topics, including gender, hate crimes, freedom of expression, and freedom of religion or belief, to name just a few. In our view — and I think in the view shared by several people, Sian, in this room — your approach was inclusive, and you constantly challenged each and every participating State to have an opportunity to contribute and engage in what we would consider to be active, open, and constructive dialogue. So thank you very much for your approach. Your consistent inclusion of OSCE institutions, field missions, and civil society organizations has enhanced the quality and impact of our discussions. We very much hope that your constructive “Concept Notes” becomes a standard best practice for the Committee.

The United States echoes your focus on the importance of voluntary reporting, which we believe is a useful means for understanding the successes and challenges participating States face in implementing their Human Dimension commitments. In July, the United States was pleased to provide a voluntary report by an attorney from the U.S. Department of Justice to discuss ways in which the federal government coordinates with grassroots civil society actors to combat hate crimes in the United States. Looking forward to the Vienna Ministerial, the United States commits to engage in good faith during negotiations on Human Dimension-related texts that foster implementation of OSCE commitments on human rights and fundamental freedoms, respect for which remains essential to lasting security in our region.

In closing, the United States greatly appreciates your respective contributions. We are grateful for your efforts and those of your delegations. With constructive engagement from each participating State, we believe that we can work together to uphold and advance our shared OSCE commitments.