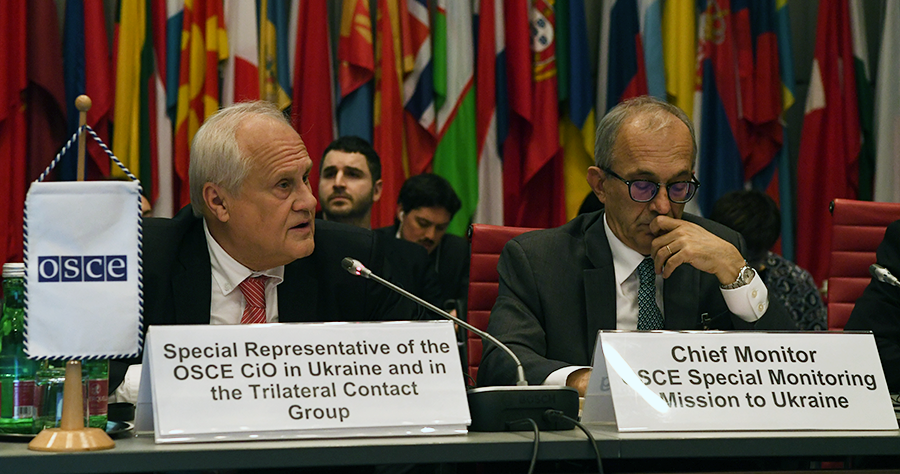 This week the long-awaited Normandy Format summit took place in Paris. We welcome the leaders’ decision to encourage the Trilateral Contact Group to facilitate the release and exchange of conflict-related detainees by the end of the year, based on the principle of “all for all.” We urge both sides to take the steps needed to complete another prisoner exchange before the end of the year, as the leaders discussed. We also welcome the proposed addition of three new disengagement sites, with the aim of completing this process by March 2020.

We trust that this summit meeting signals a change in the direction of the Russian government with respect to this conflict. While the summit was an important and necessary step to peace in eastern Ukraine, there remains much to be done, with the well-being of hundreds of thousands of civilians in the balance. We encourage Moscow to honor its new commitments as well as those under the Minsk agreements, cease all aggressive behavior, and use the opportunity for progress and peace that this summit now affords of the discussions of the four leaders. We repeat our call for Russia to completely withdraw its forces and materiel from eastern Ukraine, and end its support for illegal armed formations, as it committed to do by signing the Minsk agreements in 2014 and 2015.

Ambassadors, last week’s Ministerial Council meeting served as a firm reminder of the difficult task that you face. Once again, the participating States of this Permanent Council were unable to reach consensus in the Ministerial Council, relating to the conflict in Ukraine. One participating State – Russia, which is a party to the conflict – refused to acknowledge the realities on the ground and blocked passage of the declaration. In other words, Russia alone prevented this body from adopting a declaration that would have outlined our priorities for the coming year and identified a common approach towards ending the deadly conflict in eastern Ukraine. It is against this backdrop of obstructionism that you have to perform your difficult work. We are grateful for your persistence.

Ambassador Sajdik, we closely monitor the work of the Trilateral Contact Group, which helped to spur progress at the three pilot disengagement areas and contributed greatly to the atmosphere that brought about the long-awaited Normandy summit. The Trilateral Contact Group will continue to play an important role in the coming weeks to implement the sides’ December 9 commitments to a full and comprehensive ceasefire by the end of 2019, as well as to establish three new disengagement areas, to conduct further demining, and to create additional crossing points.

As you near the end of your tenure as Special Representative, Ambassador Sajdik, you have much to be proud of. Your pursuit of a lasting peace in eastern Ukraine has helped better the lives of countless civilians via critical infrastructure repairs and other improvements. You also helped create an important space for negotiations at the highest levels, as we saw this past week at the meeting of the Normandy Four. We look forward to working as closely with Ambassador Heidi Grau as we have with you and wish you all the best in your future endeavors. Thank you for your service to the OSCE and to the people of Ukraine.

Ambassador Cevik, your most recent report offered a varied picture of the situation on the ground. We took note of some of the bright spots that you identified, including “significant progress” at the three pilot areas of Stanytsia Luhanska, Zolote, and Petrivske, which this Council has discussed in great detail. As the only entry-exit checkpoint in Luhansk oblast, the newly repaired bridge at Stanytsia Luhanska has already had a tremendous positive impact on the local population.

While such developments have improved the lives of civilians living in these areas, the overall humanitarian situation remains worrying. Ambassador Cevik, you note in your report that the Mission recorded 40 civilian casualties since August, including three fatalities, as well as damage to civilian infrastructure and persistent ceasefire violations. The daily average of this most recent reporting period was ten percent higher than the week prior to the July 21 recommitment to the ceasefire. Even as we see progress in some aspects of the conflict, the danger to the civilian population remains.

As noted, we welcome the developments from the recent Normandy Format talks. Ambassador Cevik, we look forward to you to providing the Permanent Council with an evaluation of SMM staffing and resource requirements to enable your team to effectively monitor the ceasefire as outlined by the Normandy Format participants. As a significant contributor to the SMM; we look forward to an opportunity to assess your evaluation.

As Presidents Zelenskyy, Putin, Macron, and Chancellor Merkel noted on December 9, the OSCE Special Monitoring Mission’s work is critical to implementing and maintaining a comprehensive ceasefire as well as facilitating humanitarian progress. Each week, the United States and other participating States express concerns over the continued restriction and harassment of the Mission’s monitors. The Mission’s reports over the last two weeks detailed numerous instances in which monitors were denied the full access accorded to them in the mandate. Ambassador Cevik, your report noted that more than 90 percent of such restrictions occurred in the Russian-controlled areas between August and November. The United States calls upon Russia to cease its harassment of the Special Monitoring Mission and afford the monitors the access they need to fulfill their important mandate.

The Mission’s near-weekly reports of UAV jamming and interference are also of great concern. Such interference has resulted in the loss of multiple short-, mid-, and long-range UAVs this year – expensive equipment provided to the Mission by the participating States of this Permanent Council. The targeting of these valuable assets has become an all-too-common occurrence. It is utterly unacceptable and unexplainable, considering that the approach now is disengagement and moving towards a ceasefire. The United States calls on both sides to refrain from interfering with, or attempting to damage, the Mission’s UAVs.

Mr. Chairperson, at a moving side event at last week’s Ministerial, Ukrainian political prisoners Oleh Sentsov and Roman Sushchenko spoke about the horrors they faced in Russian prisons. They called international attention to the plight of the 85 Ukrainians still imprisoned for opposing Russian aggression. In an attempt to silence criticism of Russia’s violation of Ukraine’s territorial integrity and its abuse of the Ukrainian citizens under its occupation, Russia harasses, threatens, and prosecutes Crimean Tatars, ethnic Ukrainians and others. Just last week, a Russian court in Rostov sentenced Crimean Tatar, Enver Seitosmanov, to 17 years’ imprisonment on terror charges in apparent retaliation for his opposition to the occupation. We urge Russia to release all those who have been arbitrarily detained immediately and without preconditions.

We are concerned by the news that on December 10, Ukrainian Archbishop Klyment of Crimea and Sevastopol began a hunger strike to protest occupation authorities’ seizure of the main Ukrainian Orthodox church in Crimea, the Cathedral of Saints Vladimir and Olga. Last week, Archbishop Klyment indicated that valuable church property had been stolen after occupation authorities removed the doors from the Cathedral.

We call on Russia to return the Cathedral to the Ukrainian Orthodox community and allow members of religious minorities in Crimea to worship there in peace.