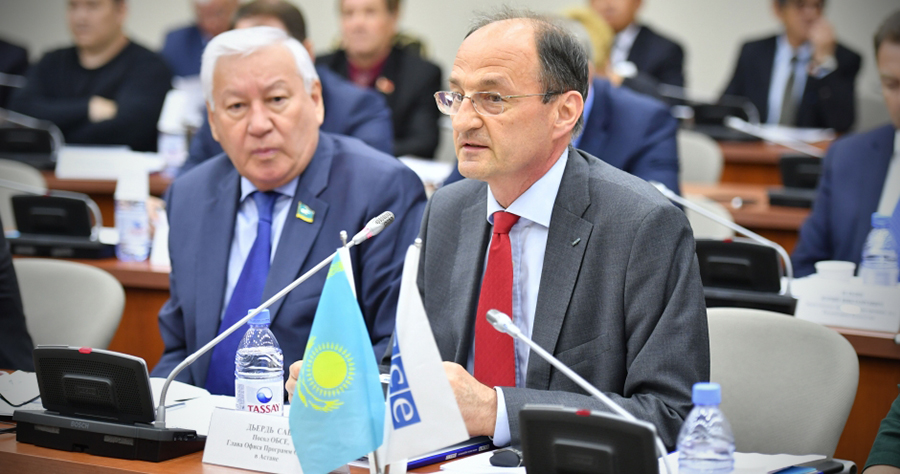 Head of the OSCE Program Office in Astana, Ambassador György Szabó, speaks at a meeting on water governance at Kazakhstan's parliament. (Photo: Parliament of Kazakhstan)

Response to Head of the Program Office in Astana, Ambassador György Szabó

As delivered by Chargé d’Affaires Michele Siders
to the Permanent Council, Vienna
June 21, 2018

Ambassador Szabó, we welcome you to the Permanent Council and thank you for your very comprehensive and informative report. The United States supports the Office’s work in Kazakhstan in all three dimensions, including countering violent extremism and radicalization that lead to terrorism, respecting and promoting human rights and the rule of law, combating corruption, countering terrorist financing, promoting democratic policing, supporting penal and criminal justice reform, combating human trafficking, promoting gender equality, and addressing domestic violence.

We welcome the emphasis the Office has placed this year on strengthening public involvement in the legislative process, on development of the National Preventive Mechanism concerning torture in places of detention, and in capacity building with law enforcement to combat sexual exploitation of children, including on the Internet. We believe this latter project is a good example of how the OSCE structures might assist with implementation of the Vienna Ministerial decision on combating trafficking and sexual exploitation of children.

The United States appreciates the Office’s work to strengthen respect for freedom of religion or belief. We are concerned that amendments to Kazakhstan’s legislation affecting religious practice could further restrict the exercise of religious freedom. We urge the Government of Kazakhstan to take advantage of OSCE expertise and allow a review of the bill, as well as to protect freedom of religion or belief throughout the country.

We remain concerned about media freedom in Kazakhstan, and join the OSCE Representative on Freedom of the Media in urging that legislation is not misused to silence media, as appears to be the case with the raid in April on Forbes Kazakhstan magazine offices and the blocking of Ratel.kz website and Facebook page under the vague law on dissemination of “false information.” The United States is also concerned about freedom of expression and political pluralism in Kazakhstan, which have been limited by Kazakhstan’s designation of certain political groups as “extremist organizations,” and making association with or disseminating information on such entities a crime.

Ambassador Szabó, we thank you again for your work, and for the work of your staff, as the Program Office assists the Government of Kazakhstan in implementing its OSCE commitments in all three dimensions.