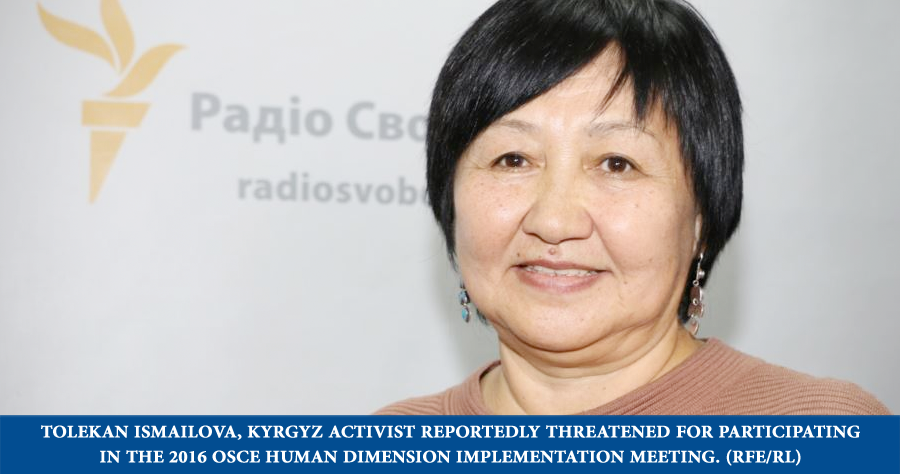 The United States strongly supports the participation of civil society from all participating States in the Human Dimension Implementation Meeting (HDIM) and other OSCE events. Democratic societies uphold the principles of freedom of speech by listening to others, even when our views differ.

According to the OSCE’s well-known modalities for civil society participation in HDIM, the only reason for an individual or group to be denied registration is if they “resort to the use of violence or publicly condone terrorism or the use of violence.” Such accusations cannot be based on unilateral political assertions.

We regret that the Kyrgyz delegation left HDIM part way through the meeting; we were interested to hear the perspective of the Government of the Kyrgyz Republic on the various issues covered at HDIM, and regret we did not have this opportunity. We look forward to the Kyrgyz Republic engaging in future OSCE events.

We are concerned about threats against two Kyrgyz human rights activists in retaliation for their participation in the HDIM – Tolekan Ismailova, Chair of the Board of the Human Rights Movement Bir Duino Kyrgyzstan, and Aziza Abdurasulova, head of the Human Rights Center Kylym Shamy. We call on the government of the Kyrgyz Republic to uphold its democratic principles and OSCE commitments, and ensure that these individuals do not face reprisals upon their return to Kyrgyzstan.

As delivered by Chargé d’Affaires a.i. Kate Byrnes to the Permanent Council, Vienna