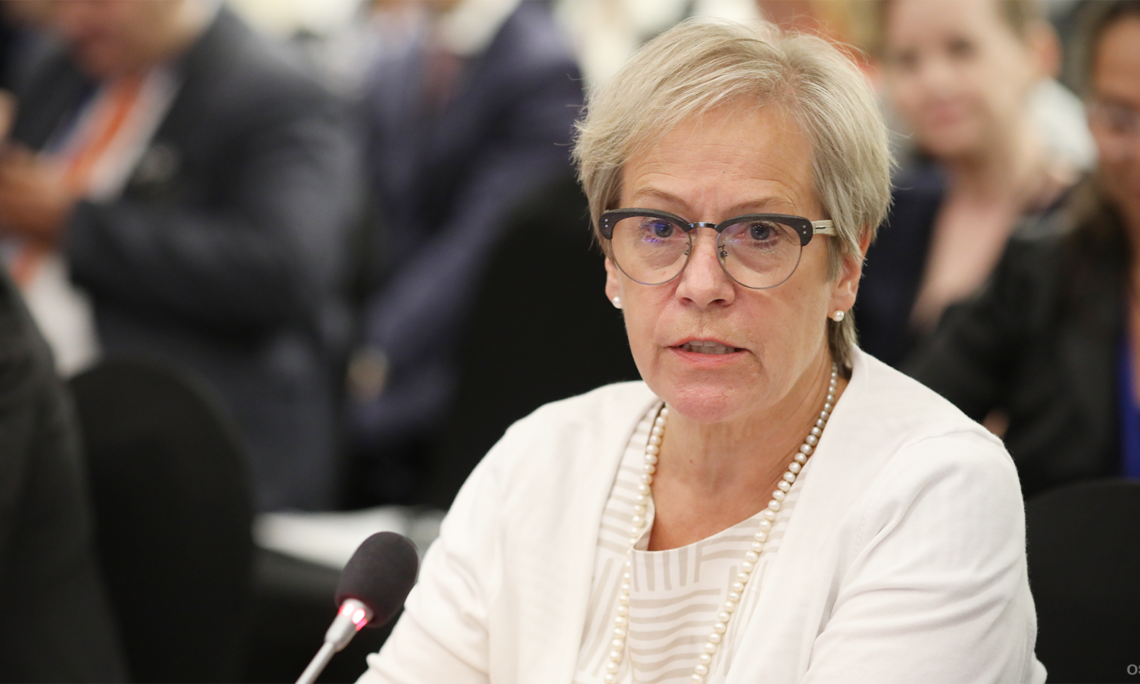 Director Gísladóttir, the United States welcomes you to the Permanent Council. Thank you for your report and organizing the 2018 Human Dimension Implementation Meeting (HDIM) in Warsaw last month. This remains a unique forum in which participating States and civil society speak at the same table. We also extend our gratitude to Poland for hosting ODIHR and HDIM and to the Chairmanship for its support. We agree with your assessment that the 2018 HDIM was a success, with record-breaking participation and many side events. That said, this important meeting should not be used as leverage for other issues. Rather, HDIM is a standing OSCE meeting held on the basis of Summit decisions and specific modalities we all accepted by consensus.

Over the two weeks of HDIM, there were some recurring themes: sanctions against Russia will remain in place until Moscow fully implements its Minsk commitments and returns full control of the Crimean peninsula to Ukraine; support for Ukraine’s and Georgia’s sovereignty and territorial integrity remains unwavering; Russia’s internal repression is of great concern, with impunity in cases of threats and violence against human rights defenders, journalists, environmental activists, political rivals, members of ethnic and religious minorities, and those who do not conform to so-called “traditional values.” Nowhere in the Russian Federation is impunity more evident than in the Republic of Chechnya.

Surveying other issues raised at HDIM, we call on participating States to release all those held for exercising their fundamental freedoms or for other unlawful or arbitrary reasons. There is still no accountability for the murders of the Bytyqi brothers, despite assurances from high-ranking Serbian officials. We welcome Tajikistan’s participation this year, but were concerned by reports that some civil society representatives chose not to attend after they, their families, and associates were threatened or interrogated by Tajik authorities.

We call on all participating States to ensure that human rights defenders and NGO representatives are able to participate in OSCE events and return to their countries without reprisals.

Madam Director, your planned efforts to attract more media coverage are good and may in fact help in the problem I just described.

This year is the fifteenth anniversary of invoking the Moscow Mechanism in Turkmenistan, yet we continue to lack adequate information on individuals who have been arrested and whose fate is unknown, including the former OSCE Ambassador and Foreign Minister Batyr Berdiev. On a positive note, we are encouraged by Armenia’s peaceful transition and Uzbekistan’s reform process. We look forward to seeing steady and concrete progress, and we believe that the OSCE can assist.

As stated in the 2004 Berlin Document, anti-Semitism and other forms of intolerance “pose a threat to democracy, to the values of civilization, and to overall security.” The United States is committed to condemning, investigating, and prosecuting hate crimes. ODIHR’s “Words into Action” program has been a success in helping communities combat anti-Semitism, and its work should continue. We support OSCE institutions, field missions, and the Chairmanship’s Special Representatives, and we will defend their independence, mandates, and budgets.

We oppose attempts by States to reduce or unduly restrict civil society access to HDIM and other OSCE proceedings. Flooding events with GONGOs with the purpose of crowding out authentic voices is counterproductive. There was insufficient time for discussion in many of this year’s working sessions. The United States proposes eliminating, or at the very least tightly limiting, the time spent introducing topics to allow States and civil society adequate time to present their views. The experts who served as Introducers would be outstanding speakers at side events. I appreciate, Madam Director, your willingness to give this study.

Participating States have made a wide range of commitments on human rights, democratic principles of government, and tolerance and non-discrimination. We should defend these values when they are challenged, not simply refuse to hear any challenges. We object to content-based restrictions in ODIHR’s Code of Conduct. While the moderators were restrained in implementing them at this year’s HDIM, we believe the content-based prohibitions are inappropriate and should be eliminated. Arguments should be challenged, not prohibited.

We look forward to discussing how to improve online systems. The new registration system came online one week late and confused many participants. We also would like to hear how live-streaming only on Facebook affected the number of people able to follow the proceedings.

Finally, Madam Director, let me turn to your comments regarding the vetting of organizations desiring to participate in HDIM and other OSCE events. We understand ODIHR’s very real limitations here. Several Chairmanships have given this problem great study and the responsibility to working towards a viable course of action lies with us, the participating States.

Once again, the United States thanks Director Gísladóttir and her team for all their efforts and for another excellent HDIM.