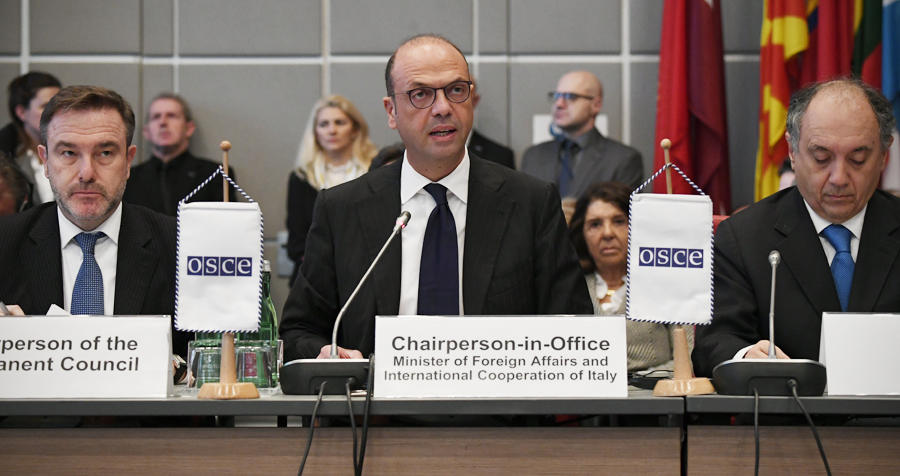 As prepared for delivery by Chargé d’Affaires, a.i. Harry Kamian
to the Permanent Council, Vienna
January 11, 2018

Mr. Minister, as your U.S. counterpart Secretary Tillerson noted during the Ministerial Council meeting last month, the conflict in eastern Ukraine is the most important and vexing security challenge facing the OSCE region today, and we welcome the high priority that you, Italy, and the Italian Chairmanship is going to attach to addressing this issue in the coming year. Russia’s occupation and purported annexation of Crimea and its actions in eastern Ukraine violate international law, they contravene Russia’s commitments, and threaten basic OSCE principles. Mr. Minister, unless Russia withdraws its forces from the Donbas, ends its occupation of Crimea, and implements fully its commitments under the Minsk agreements, we cannot move forward.

The Special Monitoring Mission (SMM) in Ukraine is a critical component of the OSCE’s response. The SMM has a vital role in implementation of the Minsk agreements. However, Russia and its proxies continue to intimidate, harass, and attack our monitors, and restrict their access, preventing them from carrying out their mandate. The SMM must be allowed to provide participating States timely, impartial, on-the-ground reporting, including from Crimea, which remains an integral part of Ukraine and thus within the SMM’s mandate.

Mr. Minister, we all have a vested interest in the SMM’s success, and therefore welcome your commitment to give all of your energy to support the SMM. The United States, too, will continue to do its part to ensure the SMM and its monitors have the necessary tools and resources to carry out their mandate. However, it is clear that the SMM has grown and, as it has grown, it needs organizational reform to create policies and procedures commensurate with the size and complexity of its mission. Mr. Minister, as Italy initiates the deep reflection process that you just described, we encourage Italy to lead efforts to integrate and improve the security, operations, and management functions of the SMM, and to develop a sound leadership succession plan.

Ukraine is not the only security challenge in our region. In this regard, we welcome Italy’s interest in resolving Europe’s protracted conflicts and the high priority that you have attached to these issues. Like Italy, we commend the progress achieved during recent months in the 5+2 Transnistrian settlement process in Moldova, and we encourage Italy to maintain the momentum. On the Nagorno-Karabakh conflict, we encourage you to provide full and unwavering support to your personal representative and his mission in support of the Minsk Group’s efforts to find a peaceful and lasting solution. We should take into account recent hopeful signs from the 2017 Geneva summit meeting between the Presidents of Armenia and Azerbaijan. With respect to Russia’s continued occupation of parts of Georgia, we urge Italy to continue insisting that Russia fulfill its commitments under the terms of the August 2008 agreement and continue supporting efforts to fully restore Georgia’s sovereignty and territorial integrity within its internationally recognized borders.

Mr. Minister, we welcome Italy’s strong focus on migration, refugees, and internally-displaced persons. We share your view that the OSCE is well positioned to address these complex issues. We also recognize the serious challenges posed by returning foreign fighters and the risk that terrorists will exploit migration routes to mask their own travel. In responding, every country has the sovereign right to protect its borders, and we all have shared commitments to uphold humanitarian obligations. We encourage Italy to consider whether this set of issues could be incorporated into the work of the Organization more broadly, including in the context of the Structured Dialogue.

As Secretary Tillerson said at the Vienna Ministerial, the United States believes that “the Structured Dialogue […] has yielded frank exchanges on the challenges that nations view as primary threats to peace and safety.” We look forward to working closely with the Italian Chairmanship to maintain that momentum and continue discussions on key areas of concern in 2018. The United States would welcome intensified discussions under the Italian Chairmanship on the full range of threat perceptions that have been raised under this initiative. Participating States should concentrate our collective efforts on the implementation and strengthening of existing arms control instruments, including updating the Vienna Document.

Minister Alfano, we must resist pressure to obstruct or diminish civil society’s participation at the OSCE. We encourage the Italian Chairmanship to protect the independence, mandates, and budgets of the Office for Democratic Institutions and Human Rights, the Representative on Freedom of the Media, and the High Commissioner on National Minorities. The United States supports all efforts to address intolerance within the OSCE region, including the Italian Chairmanship’s plans to host a conference on anti-Semitism in Rome later this month.

Finally, all OSCE participating States have a shared responsibility to provide the Organization with the leadership, guidance, and resources necessary to effectively address the areas of greatest need, and to support its highest priorities. Therefore, we share your view that it is essential to conclude a Unified Budget and scales of contribution for 2018. Mr. Minister, Italy can count on the United States to continue to serve as a constructive partner in these efforts.

In closing, Minister Alfano, the United States looks forward to working closely with Italy to fulfill mission mandates, implement our collective decisions, and hold all of us accountable for upholding our shared OSCE principles and meeting our common commitments. The United States wishes you every success in your Chairmanship this year.