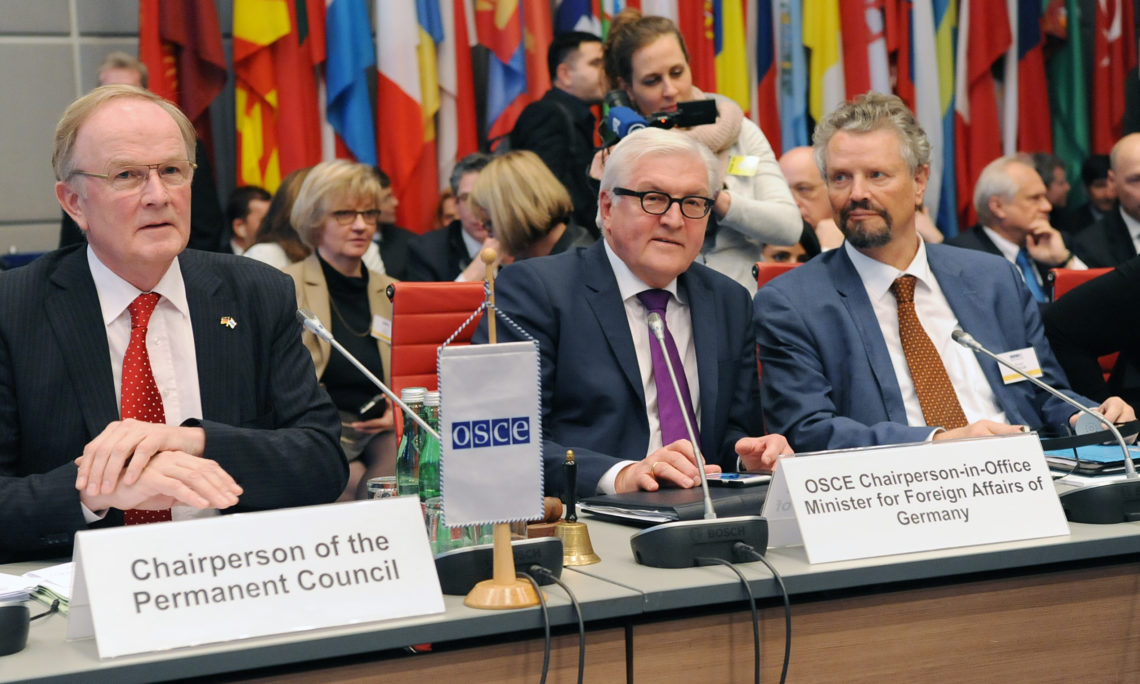 Minister Steinmeier, we are pleased to welcome you to the Permanent Council as Chairperson-in-Office. We offer our sincere thanks to you, to Ambassador Pohl and the excellent German delegation here in Vienna, and to all those working in Berlin as part of the OSCE task force, for taking on the Chairmanship of the OSCE in 2016.

At the outset, the United States joins other participating States in strongly condemning the January 12 terrorist attack in the beautiful city of Istanbul. We extend our deepest condolences to the families of those German citizens and others killed, and wish a quick and full recovery to those injured.

When German officials made the decision to put Germany forward as a candidate for the Chairmanship, they took on leadership at a critical time. Europe is facing its most significant security crisis since the end of the Cold War – a crisis which stems from the aggression of one participating State against another that violates international law and clearly contravenes OSCE principles and commitments. The United States is grateful to Germany for taking on the Chairmanship, and – as you said and as Foreign Minister Klimkin’s presence reminds us – the OSCE has a central role in the international response to the crisis in and around Ukraine. The United States also appreciates Germany’s leadership in attempting to resolve that crisis through the Normandy Format. Our common OSCE commitments provide the basis for reaching a peaceful solution, and as you affirmed, a peaceful future. The principles which are the foundation of this Organization provide the means for achieving sustainable comprehensive security in the OSCE region.

We know your Chairmanship will continue to support the Trilateral Contact Group and OSCE Special Representative Martin Sajdik’s efforts toward full implementation of the Minsk agreements– including laying the groundwork for local elections in certain parts of Donetsk and Luhansk; the return of Nadiya Savchenko, Oleg Sentsov, and all other hostages; and the return of Ukrainian control of Ukraine’s international border.

We welcome and join your strong support for  the efforts of the Special Monitoring Mission to Ukraine, and we join you and many others in supporting an expanded mandate of the Border Checkpoint Observation Mission in Russia.

Today the SMM announced two new forward operating bases on government controlled territory near the line of contact. There needs to be much more done by Russia and the separatists it backs to deliver full, safe, unhindered SMM access in territory not currently under government control.  The recent surge in threats to and interference with the SMM’s personnel and operations by Russia-backed separatists, including hostile acts against monitors, makes it clear that OSCE participating States must reaffirm the Mission’s mandate to operate freely throughout Ukraine, including attaining access to the entirety of Ukraine’s international border.

Yesterday there was a TCG meeting in Minsk, as you know, and yet this morning we have the report of new attacks overnight, as Minister Klimkin said. The regrettable unpredictability of resurgent fighting is a good reminder of the fact that no chairmanship can know at the outset what lies in the year ahead, (as the Swiss will surely tell you.) This of course was also true that the last time Germany took up the chair 25 years ago. That time, in 1991, in the second week of its chairmanship there was a confrontation at a TV tower in Vilnius, the 25th anniversary of which was yesterday, when Lithuanians stood up for their independence in the face of Soviet tanks, and 14 people’s lives were lost.

Minister Steinmeier, you stated your intention to renew dialogue while not shying away from calling out breaches of OSCE principles and international law. The United States is fully committed to continuing dialogue within this Organization toward resolving the crisis caused by Russian aggression in eastern Ukraine and Russia’s occupation of Crimea, and addressing other threats to security and shared challenges in the OSCE region. It is imperative our dialogue be grounded in and reaffirm participating States’ commitment to the concept of comprehensive and cooperative security, and to achieving it through the full implementation of all OSCE commitments across the three dimensions. And we must acknowledge that we need not only dialogue but also action to rebuild trust.

We also applaud your intention to resolve the protracted conflicts in the OSCE region. We cannot accept as permanent the situations in Nagorno-Karabakh, the breakaway region of Transnistria, or the separatist regions of Abkhazia and South Ossetia. We also welcome your intention to promote the OSCE’s confidence- and security-building measures. We look forward to working with you to ensure the full implementation of our existing arms control mechanisms, and updating them where appropriate including by completing a substantive update of the Vienna Document in 2016.

Mr. Minister, the United States stands with you on the need to address issues related to human rights and fundamental freedoms. Last year we marked the 40th anniversary of the Helsinki Final Act. In 2015, however, some participating States flouted their own commitments by placing restrictions on civil society, tightening control over the media, arresting and intimidating political opposition, attacking OSCE institutions, and manipulating elections. We must hold each other to account as participating States: we should clearly identify backsliding and failures to uphold OSCE commitments, and we should engage with citizens and civil society from across the region in a serious and continuous dialogue about protecting and advancing human rights. The United States strongly supports the German Chairmanship’s intention to promote tolerance and non-discrimination, freedom of expression and independence of the media, access to justice, and combatting anti-Semitism among its priorities.

The United States enthusiastically welcomes the German Chairmanship’s commitment to strengthen the OSCE’s work on economic and environmental issues, which can serve as effective confidence-building measures to strengthen dialogue and trust. We believe the OSCE should explore how we can most effectively address the ongoing migration and refugee crisis. It is crucial that we work together on the humanitarian and security effects this situation is having on the OSCE region. We also welcome your focus, as Chairman, on good governance. Whether it is combatting the financing of terrorism, corruption, or money-laundering, the United States supports this important work.

Minister Steinmeier, as the January 12 terrorist attack in Istanbul, the November 13 terrorist attacks in Paris, and too many others across the OSCE region demonstrated, this Organization must continue its focus on countering terrorism while protecting human rights. In recent years, we have reacted to moments of profound loss by making commitments to counter the threats presented by violent extremism, kidnaping for ransom, and foreign terrorist fighters. We should work in a concerted way to implement the commitments we’ve made.  Addressing these transnational threats requires a collective, cross-dimensional response that should be a focus of our work. The United States also welcomes your leadership in advancing the OSCE’s work in cybersecurity. We look forward to further progress in implementing this Organization’s first set of cyber confidence-building measures, and adopting a second set of practical and cooperative risk-reduction measures. These, too, can be a catalyst for dialogue if all participating States work in good faith.

The OSCE’s independent institutions deserve our steadfast support. In 2016, we will need a strong, robust Office for Democratic Institutions and Human Rights to monitor critical elections in Russia, Belarus, Macedonia, Georgia, and other participating States. And we will invite ODIHR and the OSCE PA to the United States for our elections, as we have previously. We look forward to working with the German Chairmanship and all participating States to ensure that ODIHR, the Representative on Freedom of the Media, and the High Commissioner on National Minorities can effectively and independently perform the duties assigned to them by their mandates, and are provided with sufficient resources to do so. We also look to the Chairmanship to work with the Secretariat and participating States to ensure that OSCE field missions are engaged fully to assist host countries in advancing their commitments in all three dimensions.

We share the German chairmanship’s interest in enhancing our political and practical engagement with OSCE Partners for Cooperation– as evidenced by your chairing the meeting of the Mediterranean Partners in Jordan last October. We will support your efforts to bring a renewed spirit of dialogue and cooperation to our work with partners.

We welcome the new Secretary General of the OSCE‎ Parliamentary Assembly, Mr Montella, back to Vienna and wish him well– we value our engagement with the PA and its members.

In closing, let me say again, Minister Steinmeier, that the United States welcomes Germany’s Chairmanship of the OSCE at this challenging time for Europe and in the OSCE region. You and the German delegation have our full support as we work together to strengthen this Organization, and in doing so strengthen comprehensive security in the OSCE region.