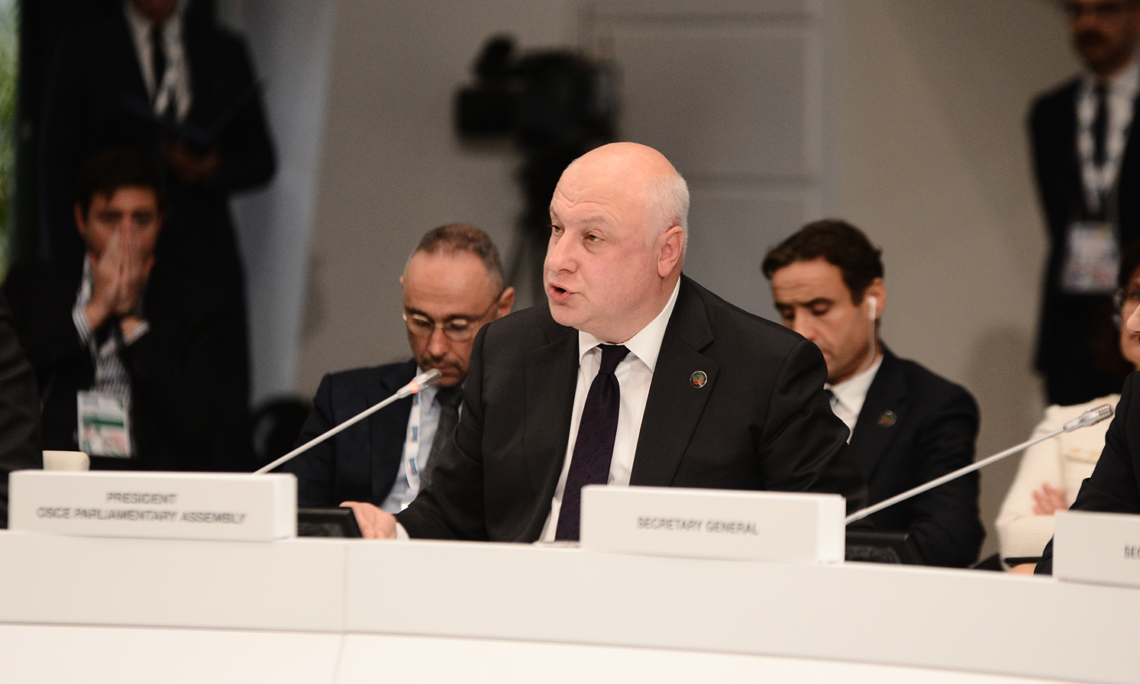 Mr. President, you know the importance the United States attaches to the work of the Parliamentary Assembly. Our Members of Congress from both the House of Representatives and the Senate regularly participate in the work of the OSCE PA. Senator Roger Wicker of Mississippi serves as a PA Vice President. Senator Ben Cardin of Maryland is a Special Representative in the Assembly for Anti-Semitism, Racism and Intolerance. Representative Chris Smith of New Jersey’s long tenure as Special Representative on Human Trafficking is further evidence of our commitment to the Assembly. And Representatives Sheila Jackson Lee of Texas and Richard Hudson of North Carolina serve on Assembly committees dealing with migration and counterterrorism, respectively.

The United States values the OSCE as a venue where we can engage honestly and openly when participating States fall short in implementing their OSCE commitments. Greater respect for the Helsinki Final Act invariably results in greater security and improved relations among States.

The United States has demonstrated its commitment through continuous engagement in the OSCE’s Structured Dialogue on Security issues. The concerns raised in 2018 demonstrate the need for the OSCE to take steps to rebuild trust in participating States’ military intentions. That is one reason the United States believes we need to work together to update the Vienna Document in 2019 so it is genuinely relevant to today’s military forces and practices.

Your efforts, Mr. President, and the work of the OSCE Parliamentary Assembly as a whole, are needed more than ever to meet today’s challenges. Let me commend the OSCE PA’s consistent censure over the past five years of Russia’s violations of Helsinki Principles in its aggression against Ukraine and other neighboring states.

We share your view on Russia’s manufactured conflict in Ukraine and welcome the passage by the OSCE PA of clear and powerful resolutions on that conflict. We also join you in condemning Russia’s illegal seizure and ongoing occupation of the Ukrainian territory of Crimea. Russia’s actions against Ukraine run counter to OSCE principles and commitments and violate international law. The United States fully supports Ukraine’s sovereignty, independence, and territorial integrity within its internationally recognized borders. We welcome the time you and your parliamentary colleagues have devoted to visiting Ukraine, including conflict areas, and your assessments that effectively counter Kremlin claims. Likewise, the United States and all OSCE states – with the exception of the Russian Federation – consider Abkhazia and South Ossetia to be integral parts of Georgia. Our support for Georgia’s sovereignty, independence, and territorial integrity within its internationally recognized borders remains unwavering.

In Berlin last July, the Assembly adopted a resolution on Russia’s deteriorating human rights situation. In particular, the resolution decried the failure to attain justice after the February 2015 murder of the leading Russian political opposition figure, Boris Nemtsov. We encourage the Assembly to press for a just resolution of the case. As you are aware, several participating States – including the United States – came together to invoke the Moscow Mechanism regarding severe human rights violations and abuses in Chechnya. The resulting expert report concluded severe human rights violations and abuses had taken place, in particular those related to “harassment and persecution, arbitrary or unlawful arrests or detentions, torture, enforced disappearances and extrajudicial executions.” The report also found that impunity for those officials responsible continues, with no effective redress for victims. There are now credible allegations of a new wave of abuses in the last few weeks. We ask the Parliamentary Assembly to help us address the violations and abuses in Chechnya and follow up on the report, especially in the face of uncooperative Russian governmental responses.

The United States welcomes the Assembly’s close monitoring of recent reversals in democratic development in some participating States. We laud the Assembly’s efforts to address intolerance and human trafficking and to protect free media throughout the OSCE region. The PA can play an important role in implementing decisions adopted in Milan last December, including on safety of journalists and combating trafficking in persons.

We support the role of the OSCE Parliamentary Assembly in OSCE election observation, including in the recent U.S. midterm elections in November. Indeed, Mr. President, you served as the Special Coordinator of the international mission that observed these elections. We look forward to receiving ODIHR’s final report, and we will carefully review the findings.

In closing, let me express appreciation for the excellent work of Ambassador Andreas Nothelle and the PA’s team here in Vienna. We look forward to continuing our close collaboration.