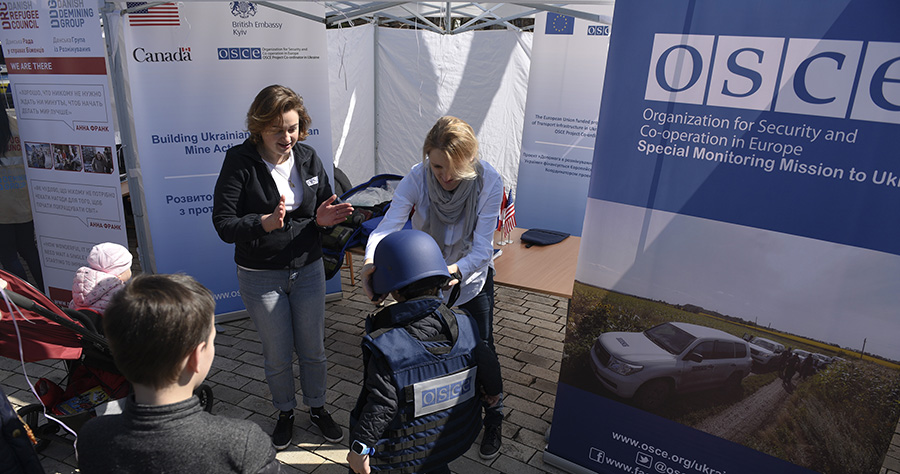 Staff members of the OSCE Project Co-ordinator in Ukraine and the SMM demonstrate demining equipment during the Mine Awareness Day in Kyiv in April 2018. (photo: OSCE/Andrii Kravchenko)

Ambassador Villadsen, the United States welcomes you back to the Permanent Council and expresses our appreciation for your detailed briefing on the work of the Project Coordinator in Ukraine (PCU).

Mr. Ambassador, in your opening remarks you noted that last week the OSCE marked the 20th anniversary of the PCU. Initially, the mission focused on strengthening the democracy of a young independent republic. In the wake of Russia’s aggression against Ukraine in Crimea, in the Donbas, and in the Black Sea, the PCU’s mission work has become more complex, more challenging, and in many cases, more vital.

Ambassador Villadsen, you and your team, despite working with limited resources, deepen our collective understanding of this conflict and its consequences. The United States commends the mission’s humanitarian demining work, including training demining personnel, strengthening the role of local authorities, and educating the public about humanitarian mine action.

The mission’s role in helping Ukraine’s Central Election Commission prepare for the recent presidential elections was especially noteworthy. The OSCE deemed both election rounds as free and fair, and your engagement with the government and civil society contributed greatly to competitive and successful elections. As a result of your efforts, the Central Election Commission is better prepared to provide the Ukrainian electorate another opportunity to cast its votes in the upcoming parliamentary elections.

Mr. Ambassador, we applaud the mission’s efforts to improve the voting process, most recently via a program designed to better link local election commissions with the voters. Such programs complement the steps your office has taken to implement stronger protections of the State Voter Registry. The United States supports these projects as keys to ensuring voter confidence in electoral institutions.

Your work to promote dialogue in eastern Ukraine is particularly important, as the region’s social cohesion has frayed after five years of ongoing Russian aggression. Your mission’s programs will help identify potential areas of conflict and prevent its spread in already tense communities. Such direct engagement, particularly with youth and other vulnerable populations, impacts the everyday lives of conflict-affected communities.

We reiterate that the mandate of the Project Coordinator in Ukraine applies to the entirety of Ukraine within its internationally recognized borders, including Crimea.

Thank you again, Ambassador, for your service to the OSCE and to the people of Ukraine.