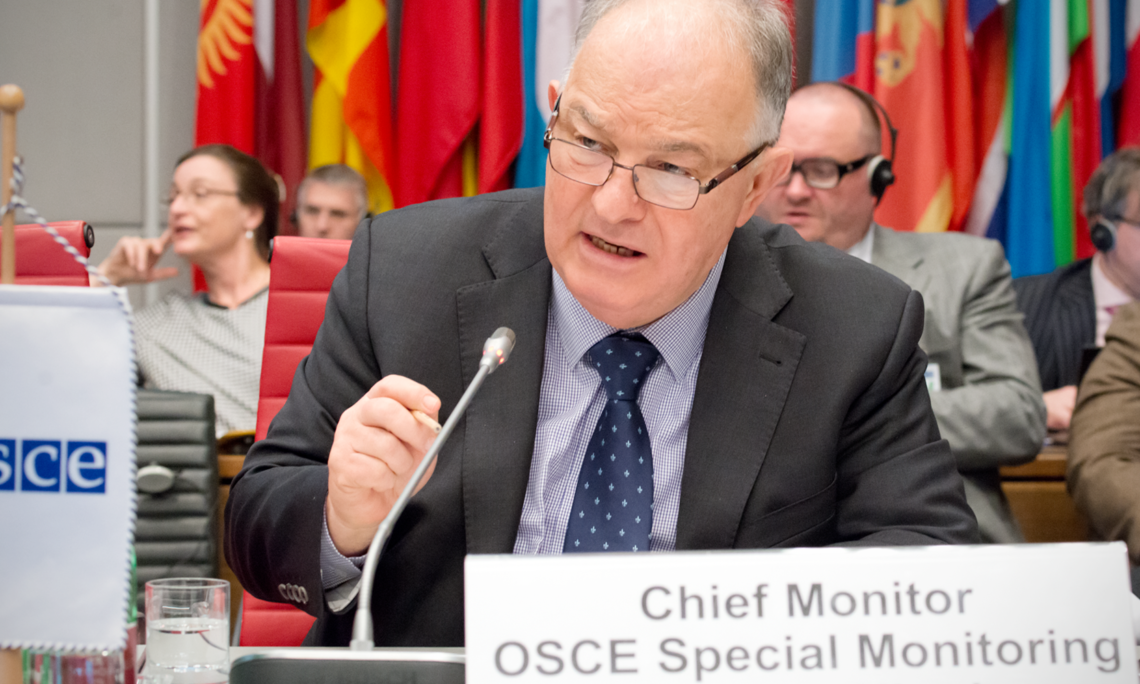 The United States welcomes Ambassadors Apakan and Sajdik back to the Permanent Council. Ambassadors, we thank you for your report, and for your tireless efforts to see the Minsk agreements implemented in full. Ambassador Apakan, please convey our gratitude to your monitors and staff who serve in difficult and at times dangerous conditions.

This week, Russia’s occupation of Crimea will have lasted 1,000 days. Russian aggression in eastern Ukraine continues to impose a terrible cost on the people of Ukraine, and continues to present a grave danger to international peace and security. We must not lose sight of a fundamental truth: this conflict is the result of Russian intervention, a fact borne out by observations from OSCE personnel on the ground. The OSCE Observer Mission at two Russian checkpoints on the border and the Special Monitoring Mission to Ukraine have documented Russia’s direct involvement in the conflict. Most recently, on November 24, the SMM observed four trucks from one of the Russian government’s so-called “aid convoys” enter a fenced compound in separatist-controlled Donetsk city. As has become their typical practice, separatists refused to allow SMM monitors access to the site or to observe what was unloaded. Russia’s consistent lack of transparency demonstrates that they have something to hide from the international community. Russia is trying to hide the fact that its military is directly involved in the conflict in eastern Ukraine. We understand that just this week, Foreign Minister Klimkin presented his Russian counterpart with evidence of Russian drones flying over Ukraine in violation of its sovereignty.

Combined Russian-separatist forces repeatedly launch similar attacks throughout eastern Ukraine. We have taken careful account, Ambassador Apakan, of the Special Monitoring Mission’s reports on ceasefire violations recorded by its cameras at three hotspots and three disengagement sites. SMM reporting shows that combined Russian-separatist forces have been responsible for the majority of such incidents since the September 1 ceasefire came into effect.

Russia has escalated tensions on the line of contact in an attempt to wrest concessions from Ukraine by force. But the fighting makes political progress on the Minsk agreements all the more difficult to achieve. If Russia truly wants agreement on modalities for local elections, on amnesty, on special status, and on decentralization, the way forward is clear: stop attacking Ukrainian forces, withdraw heavy weapons, and grant full access to the SMM throughout Ukraine, including the region along the border with Russia.

Last week, UN High Commissioner for Refugees Filippo Grandi visited Ukraine to assess firsthand the toll of the fighting on people living in the conflict zone. Grandi said during his visit, “It is the civilians who are very much trapped in the logic of this conflict.” Indeed, homes have been destroyed, and schools and water and gas lines damaged.  For months, combined Russian-separatist forces have pursued a policy of deliberate delinquency on utility bills, showing disregard for the well-being of the people living in the territory they control. The separatists still refuse to pay these bills, even though they reportedly collect utility payments from the local population. Separatist intransigence has again brought nearly 600,000 people to the brink of an emergency, at a time when temperatures have dropped and snow has fallen throughout Ukraine.

Ambassadors Sajdik and Apakan, as you know well, civilians suffer even when they embark on what should be a simple crossing between separatist-held and Ukrainian government-controlled areas, but in reality is an hours-long, dangerous journey. We repeat the appeal made at the Permanent Council by over 30 delegations to open the vehicle crossing point at Zolote, which would offer some relief to the people of Luhansk. Thus far, however, Russia-backed separatists have refused to open this crossing point, despite a commitment made over a year ago in the humanitarian working group to do so. Ukraine, for its part, has prepared its side of the crossing point for re-opening, and has indicated that it is ready to reopen the crossing point as soon as the separatists agree.

It is deliberately misleading that Russia speaks of a so-called “humanitarian blockade,” when it is Russia that has stood in the way of opening crossing points on the line of contact. We call on Russia to use its influence to facilitate the opening of the crossing point at Zolote without further delay. We also call on Russia to urge the separatists to facilitate the work of humanitarian actors in separatist-held areas. These organizations are doing vital, apolitical work, and pressuring and harassing them reflects a blatant disregard for the health and well-being of the people living in those areas.

Ukraine’s humanitarian crisis will not truly end until the conflict ends. Disengagement remains a key avenue for building the confidence needed for a sustainable ceasefire. We regret that combined Russian-separatist forces have refused to respect the ceasefire at Stanytsia Luhanska for the seven days required for disengagement to begin. Nevertheless, we underscore the need to swiftly identify additional disengagement sites, which could help alleviate civilian suffering, especially if such sites are located at other crossing points on the line of contact. Ambassador Sajdik, we also underscore the importance of reaching an agreement to protect critical chemical infrastructure from damage.

Reports by the United Nations, the OSCE, and the Council of Europe highlight a systematic campaign of repression and persecution in Russia-occupied Crimea. Activists, journalists, those speaking out against the occupation are subject to censorship, harassment, and politically-motivated imprisonment. We recall that the SMM’s mandate extends to the entire territory of Ukraine, and the mission should have unfettered access to Crimea. Sanctions related to Russia’s occupation and attempted annexation of Crimea will remain in place until the occupation ends and Russia returns the peninsula to Ukraine. We join our European and other partners in restating that our sanctions against Russia for its intervention in eastern Ukraine will remain until Russia fully implements its commitments under the Minsk agreements.