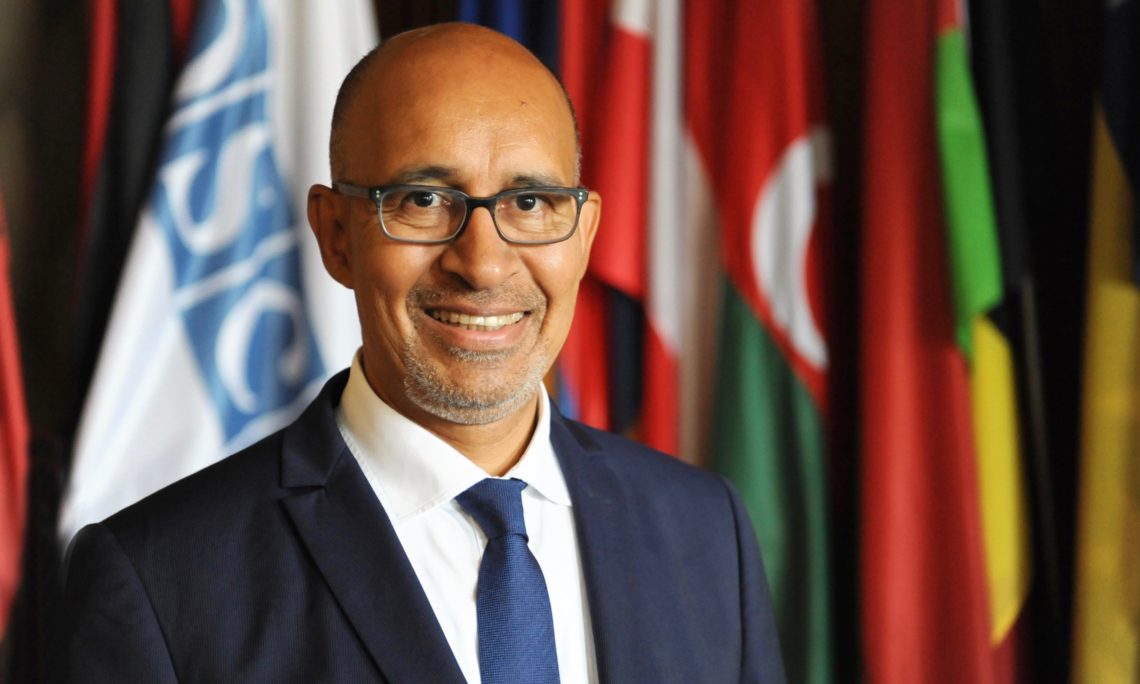 OSCE Representative on the Freedom of the Media Harlem Desir, 2017. (Photo: OSCE)

As delivered by Deputy Chief of Mission Harry R. Kamian
to the Permanent Council, Vienna
July 4, 2019

Madam Chair, the United States welcomes Representative on Freedom of the Media (RFoM) Harlem Desir back to the Permanent Council and expresses our profound appreciation to him for his comprehensive report.  The United States supports the RFoM as an essential watchdog for monitoring participating States’ fulfillment of their OSCE commitments regarding freedom of expression.

I share the sentiments expressed by a few of my colleagues here today.  Harlem, your report is indeed comprehensive, thorough, focused and clear.  It compliments well your written report, and I think it reflects the tremendous amount of commitment that you have to your job in working constructively with participating States to ensure that freedom of media is adhered to throughout the OSCE region.

Representative Desir, I appreciate the way in which you engage with all aspects of the U.S. government, journalists, civil society, television networks – a broad range of actors to better understand the environment there.  So thank you very much for your commitment on that front. Harlem, that’s a long way of just saying we strongly support and value your independence, we strongly support and value your budget and independence in mandate, all of which allows the Office to respond quickly to threats against media freedom throughout the OSCE region, and to address emerging challenges.

Madame Chair, each day we are reminded of the clear link between international security and freedom of expression, including for members of the media.  Societies where governments respect the right to freedom of media and expression are indeed, the most open, the most democratic, the most peaceful, and the most able to cooperate with their neighbors.  Freedom of speech and of the press are fundamental values of the United States that are embedded in the First Amendment to our Constitution. They are also protected by key and enduring commitments undertaken by all OSCE participating States.  Mr. Representative, we share your concern regarding specific threats to media freedom across the OSCE region highlighted in your report.

We recognize that the status of freedom of expression in Russia-occupied Crimea and Russia-controlled eastern Ukraine is dire. We join you and your  calls on Russia and its proxies in Donbas to release imprisoned Radio Free Europe/Radio Liberty correspondent Stanislav Aseev, who has been jailed on no legitimate basis for over two years.

Madame Chair, in Russia, we note concern over expansion of the legislative framework to further restrict freedom of expression online, placing social media users, including journalists, at risk of prosecution.  We share Representative Desir’s concerns about new laws that strengthen government control of the internet and prohibit the so-called “defamation of authority” and dissemination of “fake news.” We welcome the government’s decision to drop the demonstrably false drug charges against journalist Ivan Golunov following massive public protests, but we note our concern over the continued imprisonment of other Russian journalists, like Dagestan’s Abdulmumin Gadzhiyev, and the continued climate of impunity for violence against journalists in Russia.

Therefore, with all due respect, we do not share the characterization of the landscape in Russia for journalists as “among the most favorable.”  I suspect the journalists in most participating States around this table today would share my assessment.

Madame Chair, we also echo Representative Desir’s concern regarding the recent death of Ukrainian journalist Vadim Komarov following a violent attack in May.  Komarov reported on corruption in his home city of Cherkasy. We stand with the people of Ukraine in urging a thorough, transparent investigation into his death, as well as into other still-unsolved violent attacks on journalists in Ukraine.

Madame Chair, according  to the Committee to Protect Journalists, Turkey has the highest number of detained journalists in the world. We join Representative Desir’s calls on Turkey to urgently address and reverse the current severe media freedom restrictions, including criminalizing speech.  Some 150 journalists are currently in detention or pre-trial detention and more than 150 media outlets have closed since 2016. Self-censorship is widespread amid fear that criticizing the government could prompt reprisals. Mainstream print media and television stations are largely controlled by pro-government holding companies, and according to Reporters Sans Frontieres, the government is now able to exert power in 90% of the most-watched television stations and most–read national dailies.

The United States echoes the Representative’s call on Tajikistan to remove all excessive restrictions on access to the online news media, both national and international, as well as to social platforms and search engines, following the blocking of several internet resources in the country.  We urge authorities to investigate reports that family members of journalist Humayra Bakhtiyar were intimidated, and we call for reconsideration of the withdrawal of press accreditation for Radio Free Europe/Radio Liberty’s correspondent in Dushanbe.

The recent elections in Kazakhstan highlighted the ongoing repression of free media there.  Authorities denied accreditation to Radio Free Europe/Radio Liberty journalists and briefly detained other reporters.  We appreciate Representative Desir flagging the restoration of access to multiple online media outlets in Uzbekistan and we call on the Uzbek authorities to unblock Radio Free Europe/Radio Liberty immediately.