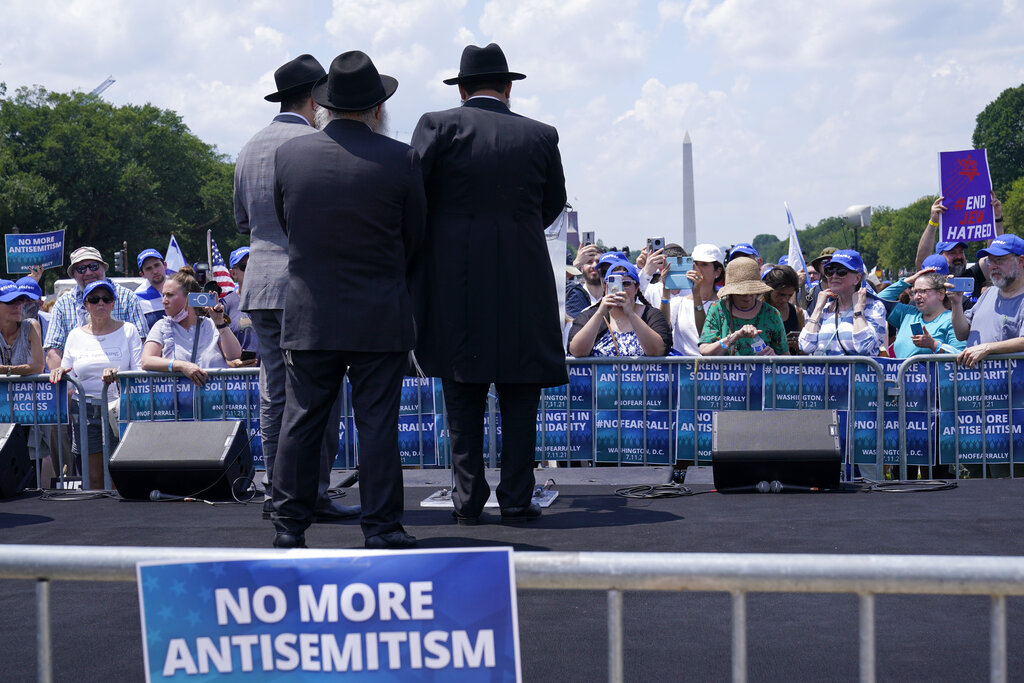 People attend the "NO FEAR: Rally in Solidarity with the Jewish People" event in Washington (AP Photo/Susan Walsh, File)

As delivered by Ambassador Michael Carpenter
to the Permanent Council, Vienna
September 22, 2022

The United States shares your commitment collectively to combatting discrimination and all forms of intolerance.  Sadly, we have a long way to go.

The Russian Federation has attempted to justify its brutal war against Ukraine by denying the very existence of a unique Ukrainian identity.  We also see the Kremlin distorting the history of the Holocaust and World War II to further its predatory designs on Ukraine’s sovereign territory, which is particularly troubling because Russia has not only failed to address its own neo-Nazi problem, but in fact uses neo-Nazis at home to help suppress anti-Kremlin protests, and globally as part of mercenary organizations.

We again call upon Russia to end its unjust and unprovoked war against Ukraine, cease its repression of Crimean Tatars, Ukrainian Orthodox Christians, and members of other religious and ethnic groups in areas of Ukraine temporarily occupied or controlled by Russia.  We further call on Russia to cease designating peaceful religious groups as “extremist,” “terrorist,” or “undesirable” in an attempt to justify abuses against their members.  Within Russia, repression continues against members of Falun Gong, Jehovah’s Witnesses, Scientologists, other minority Christians, readers of the theologian Said Nursi, and members of other religious groups.  And as I noted earlier, just yesterday we witnessed a complete travesty of justice by a Kremlin-controlled court in occupied Crimea which sentenced baselessly Crimean Tatar deputy head of the Mejlis Nariman Dzhelyal and his co-defendants Asan and Aziz Akhtemov to 17, 15, and 13 years of jail respectively.

Historical revisionism and the deliberate distortion, denial, or trivialization of the Holocaust and other historical facts is a problem we’re seeing across our region, not just in the context of Russia’s war against Ukraine.  As Personal Representatives, you are partners in our collective efforts to counter racially or ethnically motivated violent extremism, including the resurgence of Nazi ideologies and symbols as well as the dangerous conspiracy theories falsely targeting Jews, Muslims, Roma, persons of African and Asian descent, migrants, and members of other vulnerable communities.

The United States condemns in the strongest possible terms any who would deny Europe’s multi-ethnic and religiously diverse heritage.  Unfortunately, such rhetoric is still expressed at the very highest levels of some participating States.  In this respect, governments must play a leading role in systematically and explicitly calling out and condemning expressions of hatred both online and offline.

Similarly, we remain concerned about rehabilitation of individuals convicted of genocide or of crimes against humanity and holding them up as heroes.  Neither hateful rhetoric nor aggrandizement of war crimes have a place within the OSCE or within the OSCE region.

We welcome your joint statement of August 22 on the occasion of the International Day Commemorating Victims of Acts of Violence Based on Religion of Belief in which you rightly condemned Russia for wreaking death and destruction on Ukraine, killing civilians, and damaging or destroying civilian infrastructure, including places of worship, religious shrines, and memorials.  We call upon all participating States to investigate credible reports of vandalism and destruction of religious sites, including cemeteries and other sites.

We also call for the immediate release of all those across the OSCE region incarcerated for exercising their human rights and fundamental freedoms, including conscientious objectors.

More must also be done to prevent and deter human rights violations and abuses, including those involving hate crimes against LGBTQ persons.  Such actions should be roundly condemned.  Hate crimes should be fully investigated and those responsible for organizing, inciting, or perpetrating them held accountable.  All individuals are born equal in rights and dignity.

Rabbi Baker, Ambassador Musa, and Dr. Polak, as you carry out your distinct yet intersecting mandates, we welcome your continued close cooperation with one another and with ODIHR, other relevant OSCE institutions, and the OSCE Parliamentary Assembly’s Special Representative on Anti-Semitism, Racism, and Intolerance, Senator Ben Cardin.

An attack earlier this year on a synagogue in my own country, as referenced by Rabbi Baker, is only one example of the need to counter the corrosive effects of hate-fueled violence on our democracy and our citizens.  As part of its concerted response, the Biden-Harris administration convened political parties, civil society, law enforcement and religious organizations on September 15 for the United We Stand Summit.  This event mobilized communities to address racial injustice, violent extremism, hate, and division and promoted an inclusive vision of American society.  I know that President Biden and Vice President Harris are personally committed to this issue and will continue to promote inclusiveness and rally the American people to stand against hate and divisiveness.

The United States remains committed to working with the OSCE, governments, businesses, faith communities, and civil society groups across the region to condemn and combat all forms of hatred and promote respect for the human rights and fundamental freedoms of all, at home and abroad.