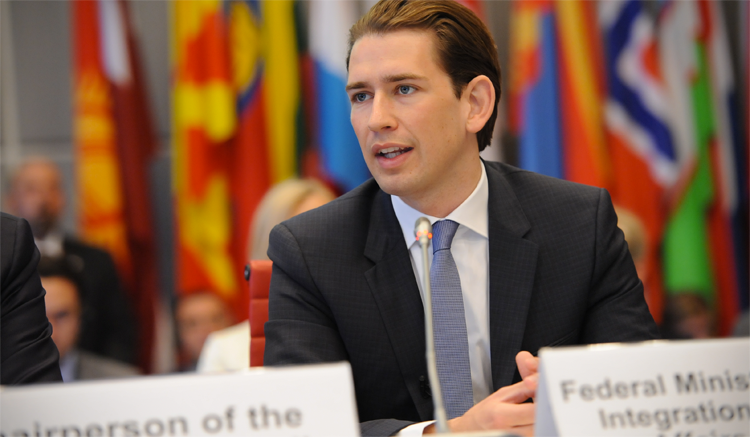 Minister Kurz, the United States welcomes you to the Permanent Council, and offers its sincere thanks to Austria for taking on the Chairmanship of the OSCE in 2017.

When the current Chairman-in-Office, Minister Steinmeier, appeared at the Permanent Council in January, we noted that Germany was assuming the Chairmanship at a time when Europe faced its most significant security crisis since the end of the Cold War – a crisis which stemmed from acts of one participating State against another; acts that violate international law and contravene OSCE principles and commitments. Unfortunately, that crisis continues. Unless, by the end of the year, the Minsk agreements are implemented fully and Russia ends its occupation of Crimea, Austria will find this same crisis dominating its OSCE Chairmanship, as you acknowledged today.‎ We must remember that our common OSCE commitments provide the basis for reaching a peaceful solution to the crisis, and that the principles which are the foundation of this Organization provide the means for achieving sustainable comprehensive security in the OSCE region.

Minister Kurz, we welcome Austria’s intention to use its Chairmanship to help resolve the conflicts in Georgia, Moldova, and Nagorno-Karabakh. The current Chair succeeded in resuming the 5+2 talks on Transnistria after a two-year hiatus, and has found modest success in bringing the sides together on a number of key issues. Minister Kurz, as you prepare for your Chairmanship, we hope Germany’s efforts in this respect provide a model of how to address protracted conflicts in the OSCE region.

There are a host of issues on which we look forward to working with the Austrian Chairmanship in 2017. These include: enhancing OSCE counterterrorism activities, both the technical elements and the effort to build a global partnership against violent extremism; cybersecurity; promoting good governance and combating corruption; renewable energy and energy security; migration and refugees; supporting civil society; upholding human rights and fundamental freedoms; and combating intolerance and discrimination. Addressing each of these issues requires maintaining the requisite political and financial support for the OSCE Secretariat, our field missions, and independent institutions: the Office for Democratic Institutions and Human Rights, the Representative on Freedom of the Media, and the High Commissioner for National Minorities.

During the OSCE’s recent Annual Security Review Conference, there was nearly universal support expressed for using fully the arms control tools at our disposal, in particular the CFE Treaty, the Open Skies Treaty, and the Vienna Document. The United States will work with the Austrian Chairmanship and other participating States to counter the erosion of our existing arms control and transparency framework, including by modernizing the Vienna Document.

Minister Kurz, let me underscore that the United States will look to the Austrian Chairmanship to maintain the OSCE’s focus on implementation by all participating States of our shared commitments, and upholding the principles of this Organization which is a key part of our rules-based international system.

We are looking forward to working with you, Minister Kurz, and your excellent team here at the OSCE, as well as with other participating States and partners for cooperation, to make the Austrian Chairmanship a success.

If you will, I’d like to make a few comments based on your statement today. While I can’t say that I was three when the Cold War ended, I’m not that much older than you. But thank you for reminding me of the time you first came to meet Secretary Kerry at the plane on one of his many trips, and Secretary Kerry was shaking your hand, and one of his staff turned to me and said, “Jeez, Baer, what have you been doing with your life? This guy’s the foreign minister already!” (Laughter)

I share your sense, and the sense – if I can call it that – of our generation, that trust is important, and that saying trust is important is really a way of saying that something has been lost, and that a sense of growing ever closer has been lost. And while the OSCE has much to be proud of in the story of the time after the Cold War – we shouldn’t forget that there was a lot of growing closer together, that there are many millions of people who live in freedom today who didn’t before, and that the OSCE is part of that story, and that is something to be grateful for – we can still express regret that a few countries have ceased growing closer, and have even reversed progress and seem to moving farther away.

The second point I wanted to make is that rebuilding trust, which you put as a priority, is so much harder than destroying it. It can be destroyed in a day, and it takes so much longer to rebuild. It was good to hear in the Russian statement today their commitment to a rules-based order and to the rules found in the Helsinki Decalogue. And while some may have found that surprising, or even an attempt at humor, I take it as a good step that the Russian Federation is committed to the Helsinki Decalogue.

But of course, given Russia’s external aggression, and its internal repression – which are linked phenomena, and which are both contraventions of the Helsinki Decalogue – it’s going to take more than just statements, it’s going to take actions in order to rebuild trust.

It will have to include the end of Russia’s actions in eastern Ukraine and violation of Ukraine’s sovereignty and territorial integrity in the Donbas. It will have to include a reversal of the dramatic backsliding on human rights in Russia and in other countries. And it will have to include good faith action – not just talk – on building the mechanisms to enhance transparency and trust. It is not okay to say ‘we support resuming dialogue, having trust,’ and then to block every single decision in this forum. It is not okay to say ‘we want a Europe where Russia and the rest of Europe are on the same page,’ and then “we resist the enhancement of the Vienna Document” to be suitable for the 21st Century. Those two statements can’t be said by the same actor while that actor is acting rationally.

From a U.S. perspective that couldn’t be further from the truth. The United States spent tens of billions of dollars and many of my colleagues have invested their entire careers in building bridges, as you say. It has been a devastatingly sad time for them to see the last few years and the way that the bridges they have invested so much in building have been burnt. But it is incredibly hard to build bridges when one side is moving ever-farther away. And the bridges we want are not a simple papering-over of differences, but genuine bridges. We want all actors in the international system to be sincerely part of the rules-based order, because we need all actors to be part of the rules-based in order to counter the threats that come from outside of it, whether those are terrorism, or disease, or other global challenges that we must face together. So, while it may not be possible to build bridges until every actor wants those bridges to be built, the OSCE can be ready to seize the opportunities when they arise, and we are committed to helping the Austrian Chairmanship next year to be ready to seize those opportunities. And we look to Austria for leadership, to ensure that our actions and our dialogue are grounded in OSCE principles and commitments. Because, while on other matters there may be a need for compromise, and compromise will be necessary, if we compromise our foundation then the whole endeavor becomes weaker and unstable.

We look forward to working with you, Mr. Minister.