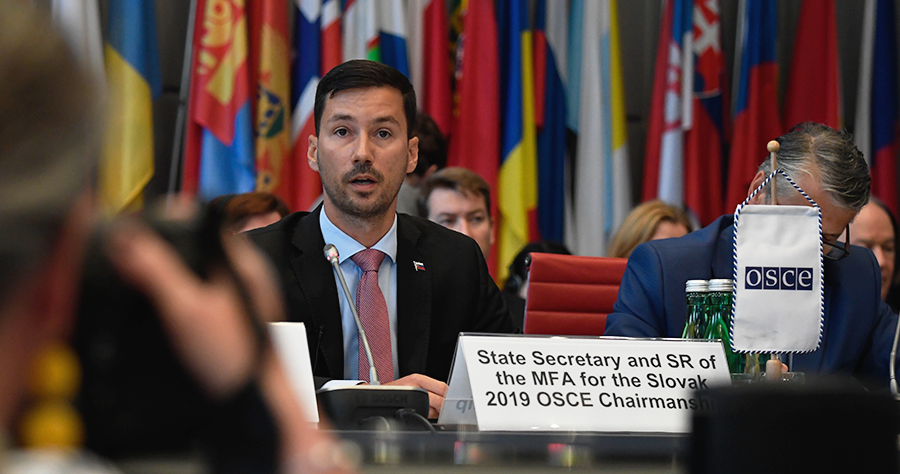 Slovakia's State Secretary, Lukáš Parízek, speaks at the July 19, 2018 Permanent Council on the priorities for his country's chairmanship of the OSCE starting next year.

Special Representative, the United States warmly welcomes you to the Permanent Council and appreciates your insight regarding Slovakia’s upcoming Chairmanship. Six months out, it is difficult to fully anticipate developments that may arise across the OSCE region. But we would like to offer for your consideration the United States’ view of organizational priorities that are likely to remain relevant during your Chairmanship.

First and foremost, barring a drastic improvement in Russian behavior, the Ukraine conflict must remain the OSCE’s highest priority. This is not an internal conflict. Moscow’s aggression has caused the most significant security crisis in Eastern Europe since the Cold War. As our esteemed Swiss colleague just mentioned, what the international community is witnessing every day on the ground is indeed a hot war. In Crimea, Russia systematically abuses those who oppose its occupation, including Crimean Tatars and ethnic Ukrainians. Russia and the forces it arms, trains, leads, and fights alongside in eastern Ukraine put civilians at constant risk of death, displace families, destroy livelihoods, and threaten environmental disaster. Russia’s attempt to change borders and impose its control by force could set a dangerous precedent. Special Representative, it undermines a core foundational principle of this Organization that we all pledged to uphold: to respect the sovereignty and territorial integrity of each and every participating State.

The Special Monitoring Mission (SMM) to Ukraine remains the international community’s eyes and ears on the ground in the parts of Ukraine worst hit by Russian aggression. Special Representative, we share your view that threats, attacks, and intimidation directed at our monitors must stop. It is imperative that Slovakia fully assert the mandate of the SMM throughout the entire territory of Ukraine, including Crimea and those parts of eastern Ukraine controlled by the Russian Federation, just as the present and past Chairmanships have done. Russia continues a campaign through the forces it controls to intimidate, constrain, and degrade the mission.

Mr. Special Representative, I note Slovakia’s commitment to keeping protracted conflicts high on the OSCE’s agenda. We welcome the substantive progress in the 5+2 negotiations on the Transnistrian Settlement Process. The package of steps that was agreed and is being implemented will bring real benefits to the people of the region. The United States will look to the Slovak Chairmanship to continue to work closely with the OSCE Mission to Moldova in support of this positive dynamic with a view to achieving results on security issues, as well as on the social and economic issues that are the focus of the package of eight.

Slovak leadership will also likely be necessary to make headway toward resolving the other protracted conflicts in the OSCE region. As you know, August 8 marks the 10th anniversary of Russia’s military intervention in Georgia. We remain deeply concerned over Russia’s continued occupation of Abkhazia and South Ossetia. We also urge the Chairmanship to ensure its personal representative on the conflict dealt with by the Minsk conference remains fully empowered and defends Helsinki Final Act principles.

Special Representative, field presences working in all three dimensions of security remain critical to the OSCE’s effectiveness in preventing and resolving conflict across the region. This year’s Permanent Representatives’ trip to the South Caucasus was one initiative to increase understanding that ultimately could lead to solutions. The Slovak Chairmanship can contribute by helping re-establish the OSCE’s presence in the South Caucasus. The OSCE has shown leadership in launching the Armenia Cooperation Program, but, to be sustainable, its work should be supported by all 57 participating States.

Special Representative, I took notice of the importance that Slovakia intends to attach to the third dimension during its chairmanship. We welcome that. The United States is deeply concerned about the direction some participating States are taking with regard to civil society. We urge the Slovak Chairmanship to oppose any attempts to weaken independent civil society or unduly restrict civil society members from accessing or participating in OSCE meetings. We must also protect the independence, mandates, and budgets of the OSCE’s institutions. Lasting security rests upon a strong foundation of respect for human rights, the fundamental freedoms of expression, association, peaceful assembly and religion or belief, and the rule of law. Security Sector Governance and Reform – a priority Slovakia has long championed – cannot be achieved without them.

The OSCE has shown how participating States can come together to address transnational threats, and as some delegations have noted, this should continue in 2019. The Slovak Chairmanship can help forge greater cooperation to counter terrorism, including terrorist ideology and the misuse of technology by terrorists. The OSCE must ensure that the tools the UN Security Council has mandated every member acquire, including in UN Security Council Resolution (UNSCR) 2396, are utilized to detect and deter terrorist travel. Combating trafficking in persons should also remain a priority, and we urge the Slovak Chairmanship to continue following up on the Vienna Ministerial decisions on combating child trafficking and sexual exploitation of children, and on strengthening efforts to prevent human trafficking across the OSCE region and beyond. Commonalities can also be found in the economic and environment dimension, and we welcome Slovakia’s intention to address energy, an issue of great importance to the security and prosperity of the region.

Special Representative, a strong commitment to implementing and strengthening existing conventional arms control agreements and arrangements, including the Open Skies and Conventional Armed Forces in Europe Treaties, as well as the Vienna Document, is vital to enhance military transparency and political stability in the OSCE. We must work to modernize the Vienna Document this year and next. There is a wide range of excellent proposals on the table to update the Vienna Document to more accurately reflect today’s security environment, that enjoy dozens of cosponsors. The United States believes it is already past time to agree on some of these important enhancements.

All these issues – from arms control to transnational threats to Ukraine – have been addressed in the ongoing Structured Dialogue on Security Issues. That dialogue needs to continue during your chairmanship. We have heard – most recently in the Structured Dialogue session during the ASRC – that all OSCE participating States support the Structured Dialogue as a venue for frank, open-ended exploration of security concerns and threat perceptions. We look for a further enriched exchange under your chairmanship, with more opportunity for dialogue among experts as well as policy officials. We need to more deeply explore issues already raised, such as threat perceptions, military exercises, and hybrid threats. The Structured Dialogue should continue without preconceived outcomes, timelines, or outside agendas, and it must be owned by participating States. The United States is ready to do its part to make those discussions fruitful.

Finally, principled and skilled leadership and sufficient resources are essential to the OSCE’s effectiveness. The United States remains a friend and partner to Slovakia as you prepare to undertake the heavy responsibilities of Chairman-in-Office, working to fulfill mission mandates, implement our collective decisions, and uphold OSCE principles and commitments. We pledge our support to the Slovak Chairmanship and look forward to working closely with you, your foreign minister, and your teams in Bratislava and in Vienna. We wish you every success for your 2019 Chairmanship.