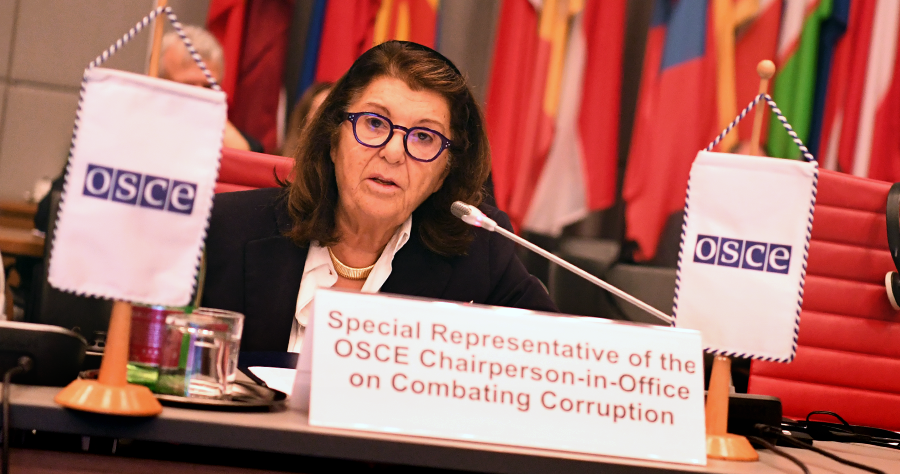 Response to the Special Representative on Combating Corruption Paola Severino

As delivered by Political Counselor Gregory Macris
to the Permanent Council, Vienna
December 19, 2019

The United States welcomes the Slovak Chairmanship’s Special Representative on Combating Corruption, Paola Severino, to the Permanent Council. Thank you, Special Representative Severino, for sharing your impressions on this important subject. Fighting corruption is a priority for my country, and we look forward to continuing our active engagement on this corrosive cross-dimensional threat during the incoming Albanian Chairmanship in 2020.

In recognition of International Anticorruption Day on December 9, U.S. Secretary of State Pompeo reaffirmed the United States will continue to dedicate substantial resources to address corruption in a comprehensive manner, including through diplomatic engagement, support of civil society, and by levying sanctions and visa restrictions. Our assistance builds transparent and accountable institutions, including within the judicial sector and law enforcement, and strengthens civil society, media, and other independent oversight mechanisms.

Under the Global Magnitsky sanctions program, the United States announced 72 designations in the beginning of December alone. Taken alongside our other policy initiatives, these designations target serious human rights abuse and corruption globally. They demonstrate the United States’ pursuit of real consequences for those who undermine the rule of law, disregard human rights and fundamental freedoms, and threaten the stability of international political and economic systems. In line with our many OSCE commitments to fight corruption, the United States will leverage sanctions and other tools to disrupt and deter human rights abuse and corruption around the globe in 2020 and beyond.

The United States applauds our international partners for their commitment to these same ideals. Secretary Pompeo congratulated the European Union on its December 9 decision to pursue the development of an EU Human Rights sanctions regime. Together, we must ensure that those who have committed such acts are denied the benefits of access to our financial systems and our shores.

We also commend the courageous work of civil society activists and investigative journalists who expose corruption, often at great risk to their own safety and security. We must support their work and strive to build societies in which they are free to operate independently and free from threats. We take this opportunity to register our concern regarding the detention and denial of entry of the credentialed Serbian journalist Stevan Dojčinović at the UN Convention Against Corruption Conference of States Parties in Abu Dhabi on December 17.

Each year on International Anticorruption Day, we call on all countries to implement their international obligations, including those from the UN Convention against Corruption, which all OSCE participating States have ratified or acceded to. I commend the OSCE Office of the Coordinator for Economic and Environmental Activities for supporting complementary projects to combat corruption, and the incoming Albanian Chairmanship for putting the fight against corruption at the top of its list of priorities.

Madam Special Representative, we have the momentum, the interest, and the ideas that are needed. I call upon you and other OSCE structures to move beyond mere discussion and show that we can make an impact in tackling this multi-faceted threat to our security.