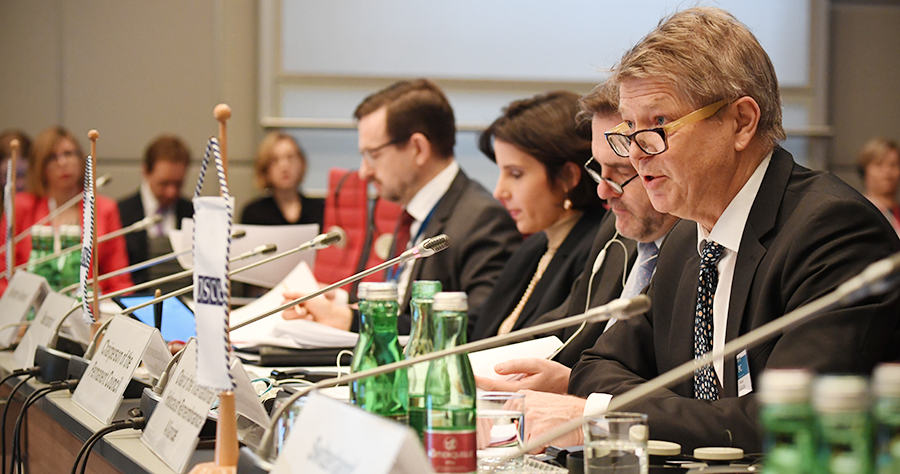 We Will Bear Witness, and We Will Act: Observing International Holocaust Remembrance Day

Mr. Chair, I would first like to join you in condemning the senseless acts of terror that occurred in Kabul this past week, acts of terror that took so many innocent lives. We offer our condolences to the families of the victims, and commend the bravery of all first responders who responded to the attacks.

Mr. Chair, I would like to express the United States’ gratitude to Switzerland as the current Chair of the International Holocaust Remembrance Alliance (IHRA). We applaud Switzerland’s leadership and dedication, and look forward to Italy’s IHRA Chairmanship.

We recall with horror the systematic persecution and brutal murder of six million Jewish people. In their death camps and under their inhuman rule, the Nazis and their collaborators also enslaved and killed millions of Slavs, Roma, members of the LGBTI community, persons with disabilities, priests and other religious leaders, and others who courageously opposed their brutal regime.

The United States is indebted to the Holocaust’s survivors. Despite the trauma they carry, survivors continue to educate us by sharing their experiences, strength, wisdom, and generosity of spirit to advance respect for human rights. Although the survivors themselves are aging and their numbers are dwindling, survivors’ stories remain with us, providing the strength to combat intolerance, including anti-Semitism and all forms of bigotry and discrimination.

Every generation must learn and apply the lessons of the Holocaust to prevent new horrors against humanity. As President Trump said: “We will stamp out prejudice. We will condemn hatred. We will bear witness, and we will act.” In this spirit, we must join together across our nations and with people of goodwill around the world to eliminate prejudice and promote more just societies. We must remain vigilant to protect the human rights and inherent dignity of every human being.

The United States thanks the Italian Chairmanship for hosting the Rome International Conference on the Responsibility of States, Institutions, and Individuals in the Fight Against Anti-Semitism in the OSCE Area on January 29. We applaud your emphasis on taking action. Absent action, the sacred pledge of “Never again” can become empty rhetoric. When we reject anti-Semitism by both word and deed – when we take a stand against intolerance and demand respect for the human rights of every person – we give renewed meaning to “Never again.”

In Rome this week, numerous conference participants called on their fellow OSCE participating States to take action by putting into practice IHRA’s working definition of anti-Semitism. We cannot overstate the practical value of the working definition. Using the definition does not change our international obligations or our internal laws, but it does mean that when we discuss anti-Semitism, we are all talking about the same thing. We commend the ongoing use of the definition by OSCE’s Office for Democratic Institutions and Human Rights. We encourage all participating States that have not done so to use it.

Mr. Chair, unchecked hate led to the ultimate horror of the Holocaust. In the decades since, in this very region and elsewhere in the world, we have seen how flames of hate can be fanned into ethnic cleansing, mass murder, genocide, and destruction on a terrible scale. In marking International Holocaust Remembrance Day, we acknowledge this dark stain on human history and vow to never let it happen again.