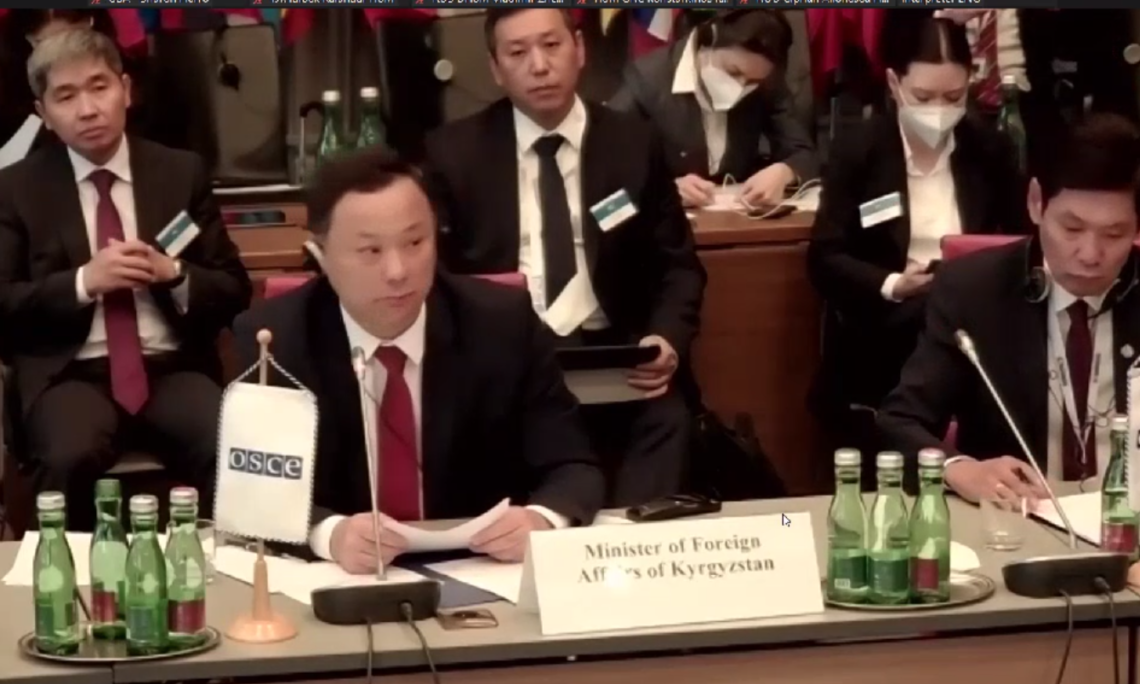 Address by Minister for Foreign Affairs of Kyrgyzstan, H.E. Mr. Ruslan Kazakbaev at the Permanent Council

Response to the Address by Minister for Foreign Affairs of Kyrgyzstan, H.E. Mr.  Ruslan Kazakbaev

Foreign Minister Kazakbaev, thank you very much for taking the time to visit Vienna and share your thoughts with us today.  The United States values our relationship with the Kyrgyz Republic and Secretary Blinken was pleased to meet with you and your C5+1 counterparts on the margins of the UN General Assembly on September 22.  The C5+1 format has become even more important in light of the changing security environment in Afghanistan.  We appreciate the Kyrgyz Republic’s support for relocation efforts.  We were also pleased your country joined the collective affirmation of the critical need for regional collaboration and ambitious country action to address the climate crisis during the first-ever C5+1 Climate Ministerial on September 21.

Turning to the human rights sphere in the Kyrgyz Republic, we commend the Bishkek district court’s August 24 decision to renew the investigation into last year’s death of journalist, activist, human rights defender and recipient in 2014 of the State Department’s Human Rights Award, Azimjon Askarov.  In 2016, the UN Human Rights Committee concluded that Mr. Askarov was arbitrarily detained, held in inhumane conditions, tortured, and otherwise mistreated without redress.  The United States looks to the Kyrgyz government to ensure an impartial and thorough investigation is conducted into Azimjon Askarov’s death.

We also remain concerned about recent changes to the constitution that legal experts note removed checks and balances among government branches, as well as recent legislation that could be used to restrict independent media and civil society.  This includes the new NGO law, which imposes onerous financial reporting requirements and restricts foreign-funded NGOs and their work.  We urge the Kyrgyz Republic to reconsider this law, protect civil society, and independent media as vibrant parts of Kyrgyz society, and not impose undue restrictions on them.  Ensuring open space for freedom of expression will be especially important as the country prepares for parliamentary elections in November.

We appreciate the Kyrgyz Republic’s support for the OSCE Program Office in Bishkek across all three dimensions, as well as the OSCE Academy.  We commend the Office’s campaign to raise awareness about transnational threats, as well as its efforts to strengthen border security and address such threats by working with the State Border Service.  This is even more vital now given the rapidly changing regional security situation.  We encourage the Kyrgyz Republic to continue its strong history of engagement with the OSCE, including with ODIHR, in advance of upcoming parliamentary elections to ensure they are free and fair.

We also welcome the opportunity to work more closely with the Kyrgyz Republic and Spain as fellow Co-Chairs of OSCE’s Group of Friends of Youth and Security.  We very much look forward to supporting Group’s upcoming meeting, hosted by the Kyrgyz Republic on the theme of education.