Home Home | News & Events | Response to the Address by the Minister of Foreign Affairs of North Macedonia, Bujar Osmani 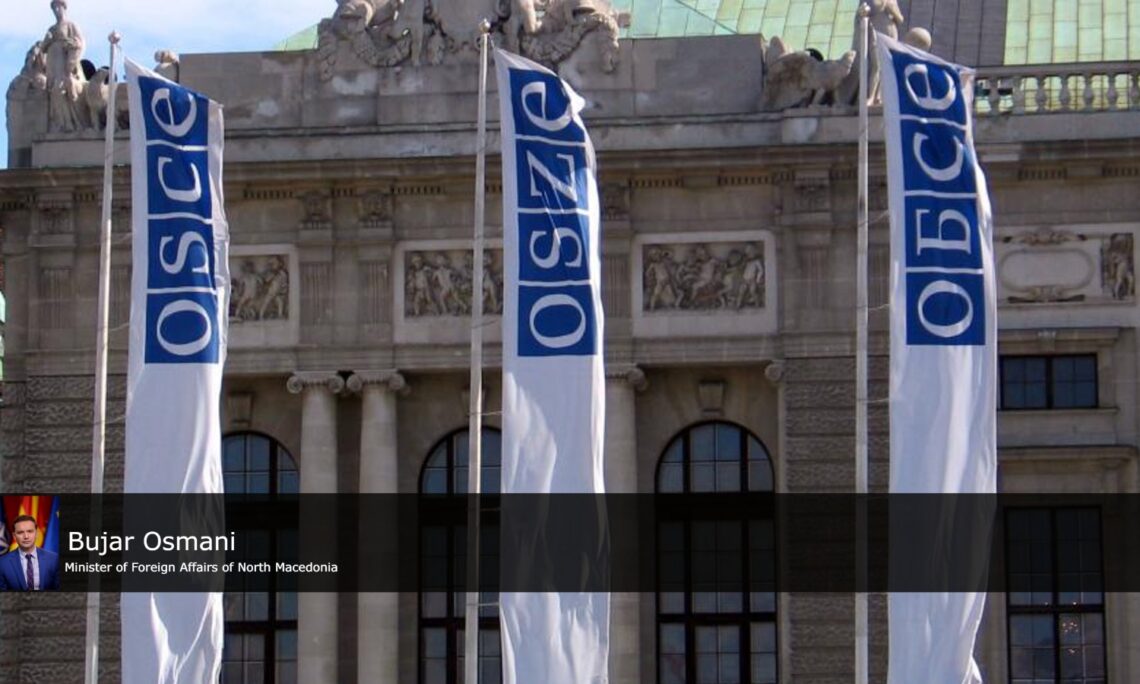 The United States gives North Macedonia our full support and we look forward to working closely.

Response to the Address by the Minister of Foreign Affairs of North Macedonia, Bujar Osmani

Thank you Foreign Minister Osmani for laying out your vision and priorities for the OSCE under your Chairpersonship.  We applaud your focus on defending the OSCE’s founding Helsinki principles and the goals set forth in the Paris Charter, and we fully agree with you that the OSCE must remain active – not despite the challenges we collectively face but precisely because of them.  This Organization has a fundamental choice to make: to passively ride out Russia’s broadside assault on its principles and hope that a better day will come soon, or take action now to defend and advance our shared values wherever possible, demanding accountability for transgressions and pushing past the naysayers to carry out the work for which this Organization is known.  We strongly support a proactive approach and based on your presentation I hear it in your priorities as well.  We are committed to doing all we can to support your Chairpersonship as you uphold and advance the OSCE’s principles, institutions, and field work.  Your team here in Vienna is very capable, and your country, as a committed, multiethnic democracy, has proven time and again its dedication to this Organization’s values.

While OSCE’s principles are under relentless assault by Russia and Belarus, we are not helpless.  Indeed, we have many tools available to hold Moscow and Minsk to account, and we should not be shy about using them.  I just heard the Russian representative speak at length about the Porto MC Decision, and PC decisions buried in the past, but he says nary word about his country’s disregard for the UN Charter, or the Helsinki Decalogue, or war crimes, or crimes against humanity, or violations of the Geneva Conventions.  Let’s think about what really are the foundational principles that we care about.  We cannot allow a failure of imagination to constrain our efforts to support and defend our comprehensive concept of security, which has served this Organization so well since its founding.  Let us think big about what we can do.  After all, the overwhelming majority of participating States in this Council support and uphold the Helsinki Final Act.  The invocation of the OSCE’s Moscow Mechanism has proven that we are not at all hobbled by Russia’s obstructionism, and that we can significantly contribute to documenting Russia’s atrocities and abuses.  Exposing war crimes and potential crimes against humanity is among the most valuable things this Organization has done since February 24.  We must continue to contribute to the cause of accountability.

Minister, we share your view that the core work of this Organization is not limited to Vienna, and that it encompasses all three dimensions of security.  OSCE field missions are indispensable to advancing human rights and fundamental freedoms, strengthening democratic institutions and the rule of law, combating corruption, promoting tolerance, addressing gender inequality, helping advance economic and environmental goals, and fostering human security and reconciliation.  Where there is political will, OSCE field missions can also help design and advance democratic reforms.  Take the example of Ukraine.  This Organization can and should respond to the request from the Ukrainian government to help cope with the consequences of Russia’s war and support the rebuilding effort that will result in an even more democratic, robust, prosperous, postwar Ukraine.  This effort will undergird the Ukrainian government’s own reforms across all three dimensions and provide practical assistance in responding to the evolving needs of civilians affected by the war.  We are committed to working with the Ukrainian government and its vibrant civil society to conceptualize and fund projects that will address and alleviate the security, economic and environmental, and human impacts of this horrific war.

While Ukraine remains front and center in our focus, we also recognize the important work of this Organization across the OSCE region, which will require the incoming Chair’s attention as well.  In the South Caucasus, for example, it will be critical for the OSCE to redouble its efforts to build peaceful relations.  I will note that Secretary Blinken just appointed Ambassador Phil Reeker, a good friend, as our new Senior Advisor for Caucasus Negotiations.  We are committed to helping facilitate a comprehensive, negotiated, and sustainable settlement of all remaining issues between Armenia and Azerbaijan to achieve a long-term, peaceful settlement to the conflict.  And now, after 14 years and counting since Russia’s military aggression against Georgia, the OSCE must continue to help achieve a peaceful resolution of that conflict, based on full respect for Georgia’s territorial integrity within its internationally recognized border as well as  the Helsinki Final Act.  We support the effective continuation of the Geneva International Discussions and the Incident Prevention and Response Mechanisms.

Minister Osmani, as you know, the OSCE conducts important work in your own country and region.  We hope that under your stewardship this Organization will build on its activities in the Western Balkans in areas that remain critical, such as early warning and conflict resolution, strengthening democratic institutions and the rule of law, electoral reform, media freedom, and respect for the human rights and dignity of historically marginalized communities.  In Moldova, where democratic forces are under constant threat of Russia’s malign actions, we underscore the importance of the OSCE’s work to buttress democratic institutions and pursue negotiations on a lasting political settlement of the Transnistrian conflict.  And in Central Asia, we will look to the North Macedonian Chair to join us in helping our Central Asian partners build institutional capacity and implement their commitments in all three dimensions of security, including through projects that not only focus on border security and countering transnational threats, but also on protecting human rights, facilitating trade and transport, and addressing climate change.

Preventing and combating corruption is, and should remain, a priority of the OSCE.  As a fundamental threat to the rule of law, corruption hollows out institutions, corrodes public trust, and fuels popular cynicism towards effective, transparent, and accountable governance.  Efforts to combat corruption are therefore most successful where they combine a national security and regional focus – in OSCE terms, working across all three dimensions simultaneously.  The OSCE is tailor-made to address this critical challenge.

The United States shares your support for the OSCE’s independent institutions, which are essential elements of safeguarding human rights and fundamental freedoms.  As Russia’s brutal war against Ukraine rages on, the work of ODIHR has become even more important.  ODIHR’s meticulous monitoring of human rights abuses and violations will contribute significantly to accountability efforts.

The third dimension must remain a priority for the OSCE.  All participating States freely adopted the Human Dimension commitments, and all of us — my own country included — will be held accountable for meeting them.  Russia will not escape international scrutiny of its unconscionable behavior by continuing to obstruct the mandated annual Human Dimension Implementation Meeting.

We support the Representative on Freedom of the Media and urge you to continue your strong support for her leadership as well.  A key part of protecting human security is championing the media so journalists and other media workers are free from threats and violence and able to shine a light on the realities that Russia and other authoritarian actors are attempting to hide from their citizens.  We also support the important work of the High Commissioner on National Minorities and call on the High Commissioner to publicly and categorically denounce Russia’s abuse of Crimean Tatars and members of other minority groups.

We strongly support your intention to advance the security needs of women and girls and commend your focus on OSCE activities that advance the Women, Peace, and Security agenda.  It is important for women to have full, equal, and meaningful participation in their security forces and be included in decision-making throughout the conflict cycle.  We further recognize that women and girls are disproportionately affected by the scourge of trafficking in human beings.  We take note of the remarkable work being carried out by the Office of the Special Representative to Combat Trafficking in Human Beings and ODIHR’s anti-trafficking unit who are providing vital assistance to victims and survivors of trafficking, including those that have recently fled Ukraine, as well as building anti-trafficking capacity for government entities and civil society.

We are also heartened by North Macedonia’s focus on youth.  As a Co-Chair of OSCE’s Group of Friends of Youth and Security, the United States recognizes the important role youth can play both as security providers as well as beneficiaries across all three dimensions.

Minister Osmani, we have no illusions about the difficult path that lies before you in 2023.  The United States gives you our full support and we look forward to working closely with you and your team, in your capacity as Chair, on our shared goals over these next 18 months.