Home Home | News & Events | Response to the Address by the Minister of Foreign Affairs of Poland, H.E. Mr. Zbigniew Rau 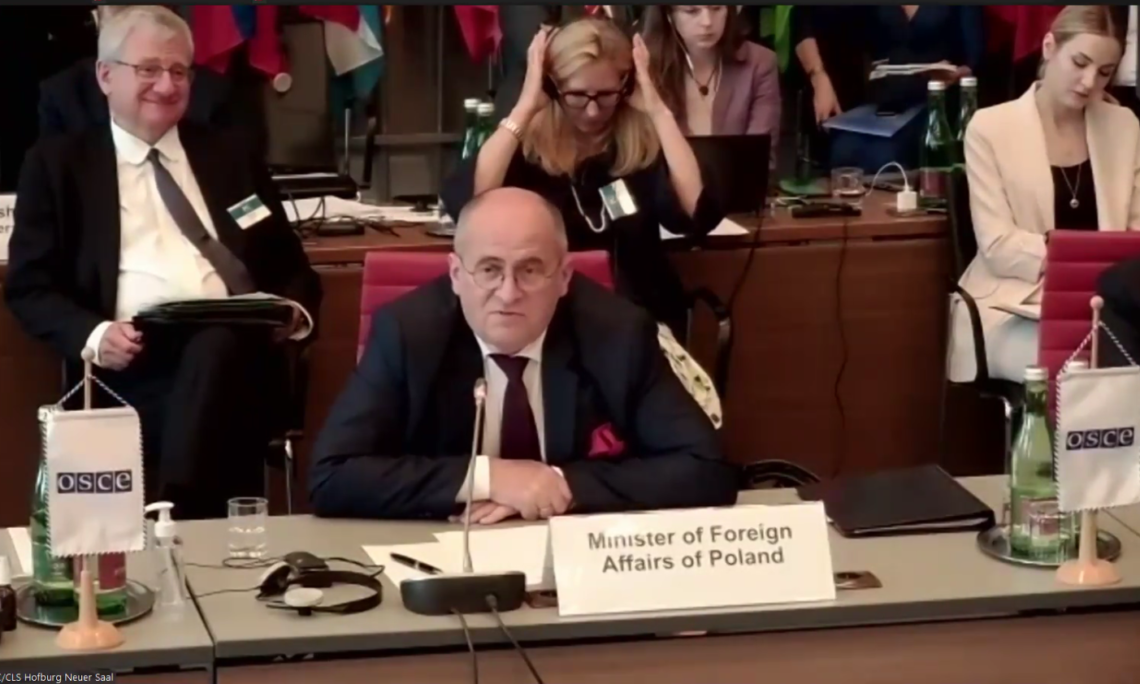 Address by the Minister of Foreign Affairs of Poland, H.E. Mr. Zbigniew Rau to the Permanent Council.

Response to the Address by the Minister of Foreign Affairs of Poland, H.E. Mr. Zbigniew Rau

I am delighted to welcome you to the Permanent Council as you prepare for this very important role as Chairman-in-Office.  Thank you for your very comprehensive address.  We commend your focus on the OSCE’s guiding Helsinki Final Act principles and the Paris Charter.  Adherence to the OSCE’s foundational principles must remain our overarching priority.

Of course, OSCE activities in the Women, Peace, and Security agenda must be strengthened.  It is imperative women have full, equal, and meaningful participation in their armed and security forces and be included at all levels of decision-making processes regarding peace and security.

We strongly support Poland’s focus within the Second Dimension on inclusivity and sustainability.  Combatting corruption and increasing government transparency are crucial components of successful economic recovery and modernization.  These must be integrated into our efforts.  Meeting these interrelated challenges requires our engagement with civil society and the private sector.

We must also address the complex, interconnected threats posed by the climate crisis and other environmental challenges such as biodiversity loss.  We must proactively combat conservation crimes like trafficking in timber, minerals, precious metals, and gemstones.  We welcome Poland’s ambition to build more secure, diverse, and resilient economies capable of withstanding future challenges.

The United States strongly welcomes Poland’s third stated priority, which is to enhance the work of the Office for Democratic Institutions and Human Rights, which your country graciously hosts.  ODIHR helps countries implement their OSCE commitments to strengthen democratic institutions and uphold human rights.  All participating States should lead by example at home by upholding democratic principles and practices and protecting the human rights and dignity of all.

The United States works within the OSCE to combat intolerance and discrimination against members of religious, ethnic, and racial minorities, women, girls, persons with disabilities, LGBTQI+ persons, and members of other vulnerable communities.   We support OSCE’s efforts to condemn and counter anti-Semitism, anti-Roma discrimination, and other forms of hatred. We strongly endorse Poland’s intent to defend human rights and fundamental freedoms in the digital sphere and we will continue to call attention to disinformation and other malign influence campaigns that exploit free societies in the attempt to undermine democratic systems of government and smear independent civil society.  We also recognize the role youth can play both as security providers and beneficiaries across all three dimensions of security.

We are sure the Polish Chair will defend and protect the independence of OSCE’s institutions—ODIHR, the Representative on Freedom of the Media, and the OSCE High Commissioner on National Minorities.  We will work with you to ensure you have the tools you need to get the job done.

Unfortunately, Minister, it will not be all smooth sailing.  One participating State continues to contravene all of the founding principles of this Organization.  Russia continued its brutal aggression in Ukraine’s Donbas and occupation of Crimea.  It occupies parts of Georgia and has failed to withdraw its unwelcome military presence from Moldova.  Russia, of course, supports the ongoing crackdown in Belarus.

As it intensified its internal repression against civil society, independent media and peaceful political opponents, it employes hybrid methods to undermine the security and democratic systems in other participating States.  It is something we will have to continue to deal with, both, as an institution and you, as the Chairman-in-Office.

That being said, sir, we look forward to a productive year in 2022 and to working closely with the Polish Chair on our shared goals over the next 18 months.  You have our sincere thanks, Minister Rau.