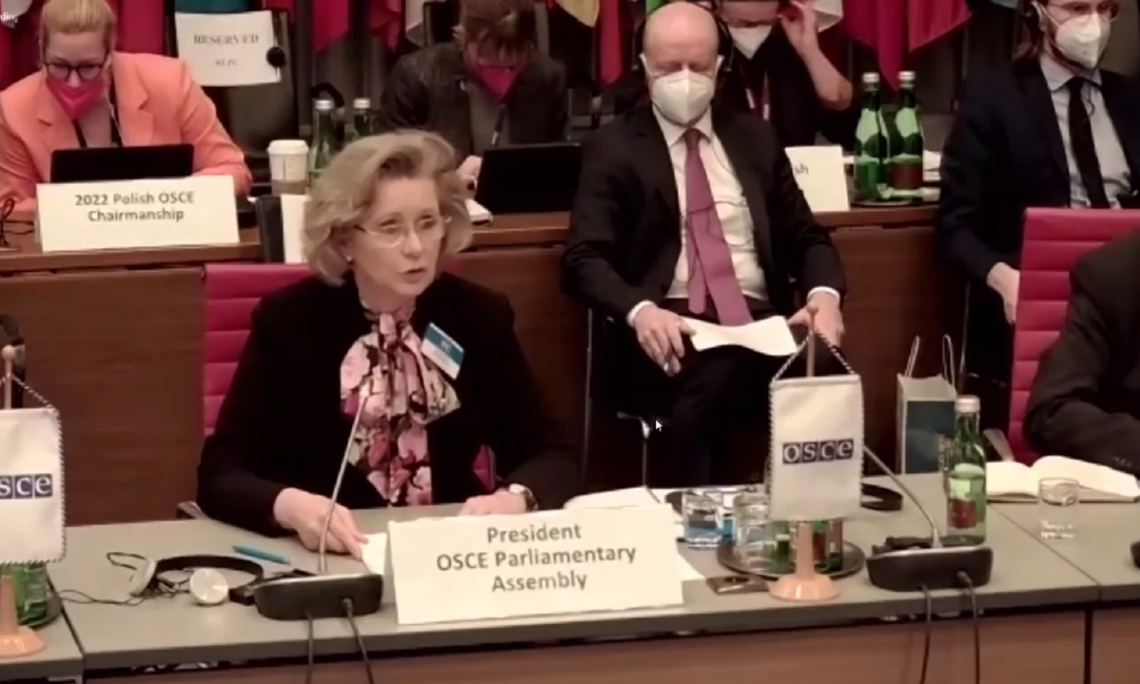 President Cederfelt, the United States welcomes you back to the Permanent Council.  We are glad the Assembly remained active in 2021, conducting country visits and returning to in-person meetings, despite the ongoing challenges of the pandemic.  We hope 2022 will be another productive year for parliamentary diplomacy.

The United States knows that addressing the many and complex threats to our common security requires not only the engagement of diplomats, and that includes those of us here in this room, both formally and informally, but also the unique contribution of parliamentarians.  OSCE parliamentarians are well placed to represent the security concerns of the vast majority of the region’s people, to defend Helsinki principles, and to support the rules-based international order.  The Parliamentary Assembly’s engagement in this regard was demonstrated at the 2021 Annual Session with the adoption of three resolutions, namely: on Russia’s destabilizing military build-up in and around Ukraine; on the brutal crackdown in Belarus following the fraudulent 2020 election, and on addressing the rise of hate, intolerance, and violent extremism throughout the OSCE region.  We welcome your perspective on the pressing concerns in European security today and the need for dialogue in the lead up to the 2022 Annual Session.

The contribution of OSCE parliamentarians to election observation missions across the region is substantial and deeply valued.  The United States thanks you for the OSCE Parliamentary Assembly’s ongoing commitment to deploying observers, thereby reinforcing ODIHR’s comprehensive elections methodology.  This is particularly important given the number of critical elections foreseen to take place across the region in 2022 — to include the midterm elections in the United States this November.

The United States also values the Assembly as a venue that challenges this community to address difficult issues.  We appreciate your calls to safeguard robust civil society participation in OSCE meetings, the timely adoption of the budget, and the convening of the annual Human Dimension Implementation Meeting.  We appreciate Ambassador Lamberto Zannier’s leadership of the Assembly’s “Call for Action” dialogue series on enhancing the organization’s effectiveness.  We continue to welcome calls by you and past Assembly Presidents highlighting the OSCE as a forum for genuine dialogue among States and your calls to increase the transparency of OSCE processes.  While we will always reserve avenues for quiet diplomacy, we appreciate that transparency in our work can stimulate greater accountability and progress towards implementing our commitments.

Madam President, I also would like to express appreciation for the work of OSCE Parliamentary Assembly Secretary General, Roberto Montella, and the teams in Copenhagen and Vienna.  The Assembly’s Delegation Liaison, Ambassador Miodrag Panceski, represents you well at this table.  You can rely on the continued support of the United States to ensure the Parliamentary Assembly’s inclusion, as appropriate, in our deliberations.

We wish you continued success in 2022.