Home Home | News & Events | Response to the Address by the President of the International Committee of the Red Cross, Peter Maurer 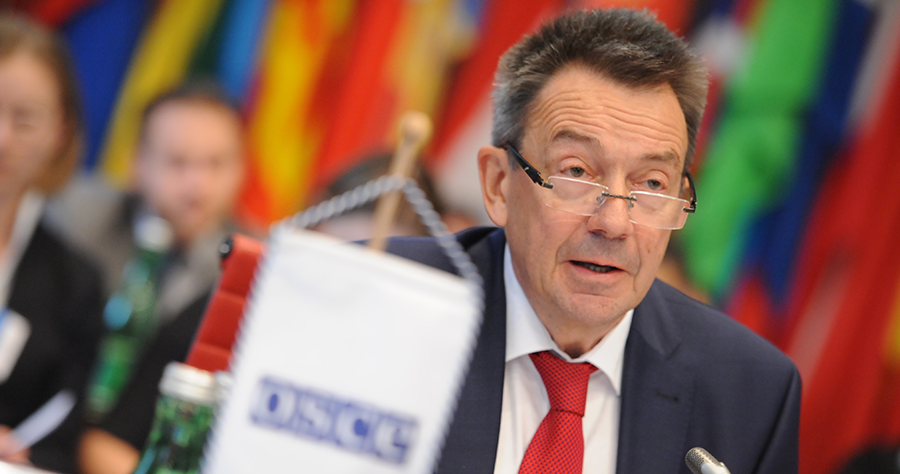 The president of the International Council of the Red Cross, Peter Maurer, addresses the OSCE Permanent Council . (OSCE/Kroell)

Response to the Address by the President of the International Committee of the Red Cross, Peter Maurer

The United States warmly welcomes you, President Maurer, to the Permanent Council for your annual address.  The United States greatly values the work of the International Committee of the Red Cross and your cooperation with the OSCE.  The ICRC’s courageous staff work around the globe to protect human dignity.  In concert with the dedicated individuals serving in OSCE missions your team works to advance security in our region, and I thank you for that.

Just last week, the Ministerial Council considered the on-going conflicts in the OSCE region.  The overwhelming majority of participating States urged Russia to observe the ceasefire, withdraw its forces from Ukraine, and engage meaningfully in peace negotiations.  The Ministers called on Russia to facilitate unhindered access by the OSCE’s Special Monitoring Mission in Ukraine to all areas in Ukraine, including along the internationally recognized Ukraine-Russia border.  We call on Russia to provide unhindered access to detainees in Russia-controlled areas of eastern Ukraine.  We applaud the ICRC’s independent humanitarian action to alleviate human suffering, which, alongside the SMM’s efforts, are crucial to creating space for negotiations.

We commend the ICRC’s neutral and impartial work in Armenia and Azerbaijan.  We urge the sides to facilitate unhindered access to detainees as well as to disputed areas to alleviate the humanitarian situation.  We also urge the sides to investigate allegations of human rights abuse and violations of international humanitarian law.  We also commend the ICRC’s work in Georgia to help communities in conflict-affected areas on both sides of the administrative boundary lines facilitate family reunification and clarify the fate of missing persons.

We also value your humanitarian efforts in non-conflict situations, such as your work to promote humane treatment of persons in places of confinement.  This has been especially important during the COVID-19 pandemic.  We welcome the government of Uzbekistan’s change this year regarding third-party access to prisons and encourage the government to fully implement this new regulation.

Respect for international humanitarian law and adherence to OSCE commitments, including the Helsinki Final Act and Charter of Paris, are crucial for resolving these conflicts and advancing security in our region.  The OSCE and the ICRC serve as defenders of our rules-based international order and of human dignity.  You have our firm support.  The ICRC’s neutral, impartial, independent humanitarian action is crucial to saving lives and protecting human dignity in conflict ravaged areas.

On behalf of the United States, I want to thank you, President Maurer, and the devoted staff of the ICRC for your tireless, compassionate, and lifesaving work.