Home Home | News & Events | Response to the Address by the President of the OSCE Parliamentary Assembly, Peter Lord Bowness 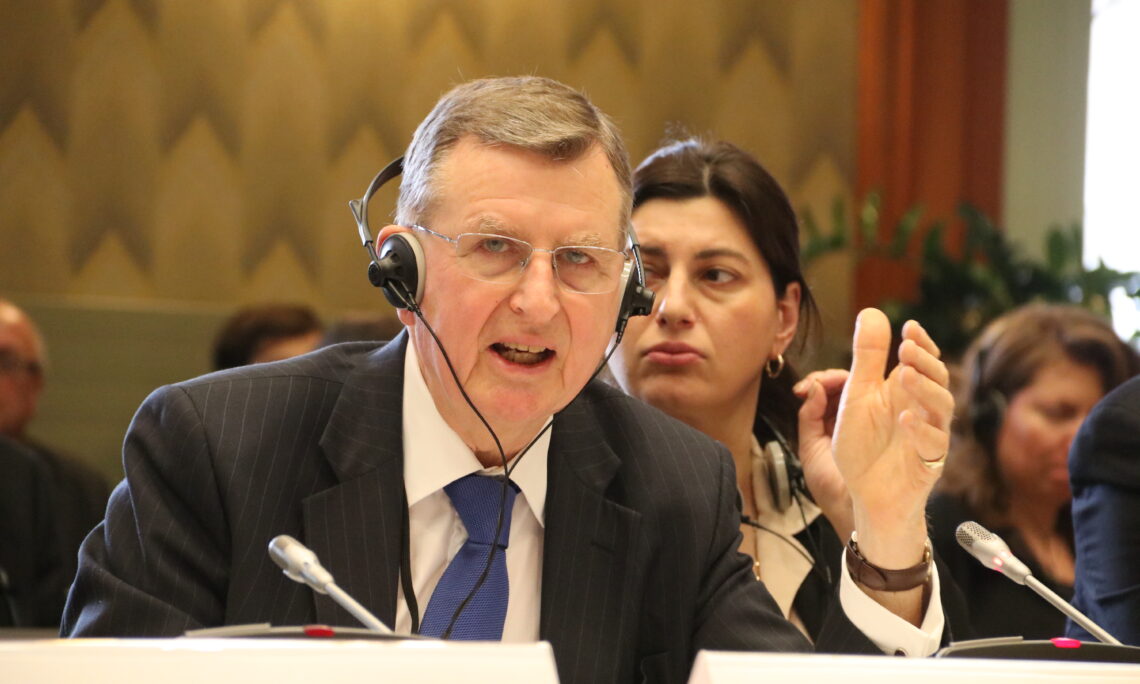 Response to the Address by the President of the OSCE Parliamentary Assembly, Peter Lord Bowness @oscepa

Response to the Address by the President of the OSCE Parliamentary Assembly, Peter Lord Bowness

The United States welcomes OSCE Parliamentary Assembly President Right Honorable Peter Lord Bowness for your first address to the Permanent Council and we look forward to working with you.

We congratulate the Parliamentary Assembly on sustaining the Assembly’s engagement on key issues throughout 2020 despite the pandemic, including: defending human rights and democratic principles; promoting tolerance; environmental protection; anti-corruption; migration; combatting human trafficking; Russia’s aggression in Ukraine and Georgia and its continued military presence in Moldova; and the brutal crackdown in Belarus.  We appreciate the Assembly’s deployment of election observation missions to the Kyrgyz Republic and Kazakhstan already in 2021.

I note your reference to events in my own country and we look forward to the publication of the OSCE final report on the observation of the November general elections held in the United States.  The United States takes the report seriously and welcomes its independent perspective.

We note also your joint statement, issued together with senior observer mission officials, condemning the storming of the Capitol.  We thank you, as well as those national leaders, parliamentarians, diplomats, officials, and others from the OSCE community for the heartfelt expressions of concern.

Let me assure you, our democracy is resilient.  In accordance with our Constitution, President Joseph R. Biden Jr. was inaugurated yesterday as the 46th President of the United States.  As President Biden stated in his Inaugural Address, “I know the forces that divide us are deep and they are real, but I also know they are not new.  Our history has been a constant struggle between the American ideal that we’re all created equal and the harsh, ugly reality that racism, nativism, fear, demonization have long torn us apart…through civil war, the Great Depression, World War, 9/11, through struggle, sacrifice and setbacks, our better angels have always prevailed.  In each of these moments, enough of us… have come together to carry all of us forward.  And we can do that now.”

OSCE’s foundational Helsinki Final Act principles and comprehensive security concept recognize that respect for human rights and democratic processes within states, and for the sovereignty and territorial integrity among states, is essential to building prosperity and peace.   However, one participating State continues to show contempt for all ten of the OSCE’s foundational principles, and, by doing so, undermines security in this region.  We call on Russia to honor the principles it, and all participating States, freely committed to uphold.

The United States has often highlighted the close cooperation between the U.S. Mission to OSCE and the U.S. Congress.  A number of U.S. Congress members are delegates to the OSCE Parliamentary Assembly.  Members of our House of Representatives and Senate are also distinguished members of the bipartisan U.S. Helsinki Commission and serve in the Assembly’s leadership.  Assembly parliamentarians can play a powerful role in leveraging the OSCE to promote security and cooperation in the region, in making the OSCE more widely known to the public, and in ensuring its work is adequately resourced.  Indeed, these are key goals of the Assembly’s “OSCE Call for Action: Reaffirming a Common Purpose” initiative.

We regret, as do you, the constraints imposed by the pandemic require the Assembly’s Winter Meeting be conducted in a virtual format rather than convene at the Hofburg, in Vienna as the meeting provides opportunities for OSCE delegations to better understand the work of the PA and engage parliamentarians.

We hope conditions allow for a productive and in-person Annual Session in Bucharest, Romania in July.  Our Members of Congress value the Annual Session as a means of focusing debates on timely and compelling issues and seeking common ground through drafting committee resolutions and supplementary items which comprise an Annual Session declaration.  We urge participating States to consider these substantive declarations as we pursue our own work here in Vienna.

To conclude, Mr. President, we encourage OSCE Parliamentary Assembly delegates to continue to use their independent voices to support the vital work of this organization and its institutions and defend the foundational principles of the Helsinki Final Act.