Home Home | News & Events | Response to the Address by the Secretary General of the Council of Europe, Ms. Marija Pejčinović Burić 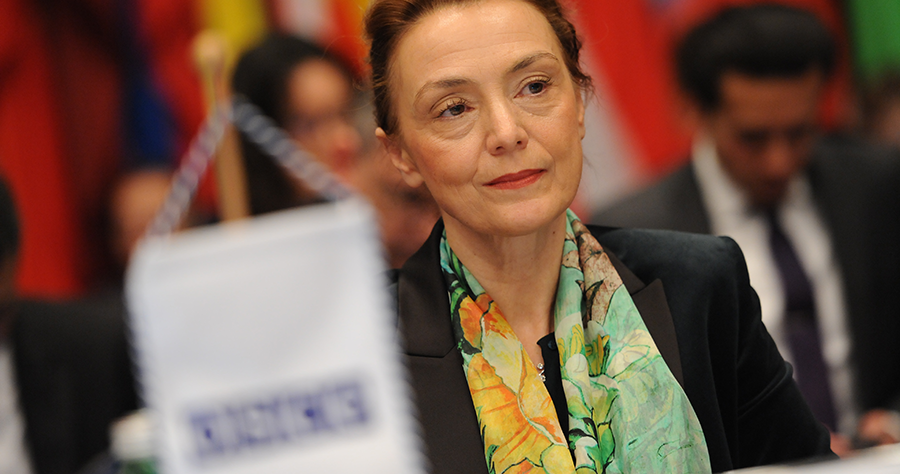 Response to the Address by the Secretary General of the Council of Europe, Ms. Marija Pejčinović Burić

Secretary General Pejčinović Burić, the United States welcomes you in your second appearance here at the OSCE’s Permanent Council.  The United States is pleased to welcome you because of our heavy involvement in this multilateral organization and we look forward to continuing to cooperate with the Council of Europe, another multilateral organization.  We appreciate the overview of the Council of Europe’s work this year, and how the Council responded to the needs of its member states, particularly in light of the pandemic.

As we are about to celebrate the 25th anniversary of the United States as an observer to the Council of Europe, we are proud to be full members of the Venice Commission and of GRECO – the Group of States Against Corruption.  We work closely with the Council of Europe to counter terrorism, including as members of the 24/7 Networks of Contact Points on Foreign Terrorist Fighters and on the Exchange of Information Regarding the Legal Standing of Victims of Terrorism, as well as a number of other working groups.

Let me also highlight the importance of the Budapest Convention, which provides a framework for countries as they develop national cybercrime legislation and remains the leading instrument for international cooperation in combating cybercrime.  The United States is pleased to regularly and significantly contribute to the work of the Cybercrime Convention Committee.

The OSCE and the Council of Europe must work in concert to protect and promote our common values and principles as enshrined in the Helsinki Final Act and in the Statute of the Council of Europe.  Protecting human rights and fostering democratic societies and the rule of law are essential components of our shared approach to comprehensive security.

Yet, Russia continues to undermine and challenge our rules-based international order.  By seizing and occupying Crimea and instigating the conflict in eastern Ukraine, Russia has violated Ukraine’s sovereignty and territorial integrity within its internationally-recognized borders.  The Kremlin imposes its will on occupied Crimea with an iron fist and harasses, arrests, and imprisons Crimean residents based on their religion and ethnicity or simply for their opposition to the occupation.  Moscow continues to undermine Georgia’s sovereignty and territorial integrity with its occupation of the Georgian regions of Abkhazia and South Ossetia.  So to repeat, Madame Secretary General, these are not just illegal incursions, this conduct undermines the entire framework that we all together adhere to, to keep the peace in the OSCE region.

We commend the Council of Europe for its efforts to get its members to comply with their obligations, for example, abiding by judgements handed down by the European Court of Human Rights, paying all debts owed to the institution and facilitating the access of monitoring bodies to their territories.

The pandemic has exacerbated already existing challenges to our common security.  In this respect, we welcomed the toolkit for Council of Europe member states you published earlier this year.  As you noted, domestic violence increased while access to services decreased due, in part, to shelter-in-place measures enacted by governments to protect public health.  Both the OSCE and the Council of Europe must do their part to help States address this crisis.  We would like to see our two organizations collaborate closely to combat violence against women and girls and promote the goals of UNSCR 1325 on Women, Peace, and Security, drawing on each body’s respective strengths.

The OSCE and the Council of Europe have significant, complementary roles to play in strengthening respect for human rights, fundamental freedoms, and democratic government.  Our field offices, particularly in the Western Balkans and Ukraine, have strong track records of cooperation.  We look forward to resuming strong cooperation between the OSCE and the Council of Europe on election monitoring and observation once public health conditions are suitable.

The joint legal analyses of the Venice Commission and the OSCE, on topics spanning from election-related legislation to freedom of religion and belief can strengthen the rule of law by assisting countries to uphold their international obligations and commitments.  We look forward, for example, to Uzbekistan’s response to the review by ODIHR and the Venice Commission’s review of its draft law on religion.

We would like to see more collaboration between the OSCE and the Council of Europe’s anti-corruption body, the Group of States Against Corruption.  OSCE participating States would benefit from this system of peer review and holding each other accountable.

In conclusion, Madame Secretary General, the United States continues to cooperate and to participate in these multilateral organizations, including ours and yours, and we thank you for your appearance here at the Permanent Council, and we value cooperation between the OSCE and the Council of Europe.

Thank you, Mr. Chairman, for the opportunity to make this statement on behalf of the United States.