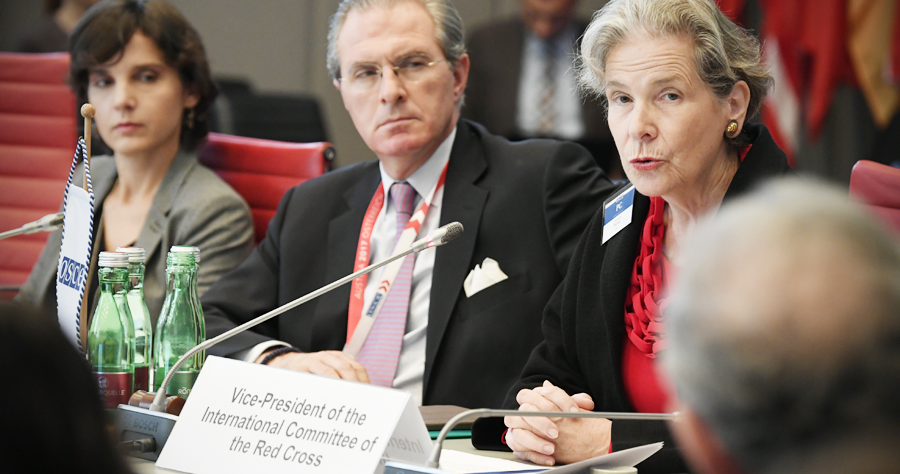 Response to the Address by the Vice-President of the International Committee of the Red Cross, Ms. Christine Beerli

The United States warmly welcomes Christine Beerli, Vice-President of the International Committee of the Red Cross (ICRC), to the Permanent Council. The United States deeply appreciates the work of the ICRC to preserve dignity and protect lives in situations of armed conflict. Sadly, millions of people around the globe suffer the scourge of war and conflict. Even when conflicts are largely resolved, people continue to benefit from the ICRC’s humanitarian assistance.

Madam Vice-President, the United States commends you for highlighting the situation in Ukraine in your opening remarks today. We welcome the ICRC’s continued efforts to ease the suffering of the non-combatants caught in the conflict area. We note the courage of your staff and the role they played in restoring the water supply to parts of the Donbas, particularly in Avdiyivka in the critical days after the Russia-led offensive last winter. We recognize that the ICRC delivers life-saving medical assistance to hospitals and clinics along the line of contact. The ICRC’s efforts to mitigate the effects of the conflict in Georgia and that over Nagorno-Karabakh – through clarifying the fate of missing persons, visiting detainees, restoring family links, and facilitating the return of remains – are all important aspects of protecting the human dignity of persons living in conflict-affected areas.

In Georgia, the ICRC’s work to help families on both sides of the Administrative Boundary Lines has a direct impact on the livelihoods and well-being of families artificially divided. Its assistance in excavating and identifying the remains from grave sites in conflict–affected areas in the Georgian regions of Abkhazia and South Ossetia helps bring closure to families wondering about the fate of loved ones. Likewise, the ICRC’s work on the Nagorno-Karabakh conflict to find missing persons and to facilitate prisoner exchanges is an important measure for building trust at the local level. It also complements the ongoing efforts of the Co-Chairs of the OSCE Minsk Group to find a lasting and peaceful settlement to this conflict, which has endured for far too long.

The ICRC’s neutral humanitarian work and the OSCE’s diplomatic engagement complement each other. The ICRC and the OSCE are striving to ease human suffering by preventing and ending conflict, through the efforts to promote international humanitarian law and the OSCE’s comprehensive security commitments. We are encouraged by the existing track record of ICRC–OSCE cooperation in Armenia, Azerbaijan, and Georgia, and want to strengthen cooperation in Central Asia. Given the longstanding concerns about disappearances in Turkmenistan, which arose again at the recent OSCE Human Dimension Implementation Meeting, we wonder if there is scope for ICRC there as well.

ICRC’s committed teams of professionals work in dangerous environments, often out of the international limelight. Yet, the humanitarian assistance the ICRC provides is crucial to protecting human dignity and saving lives in conflict-affected areas, and to creating space conducive to settlement processes.

Ms. Beerli, on behalf of the United States, I wish to thank you and the devoted corps of the ICRC.