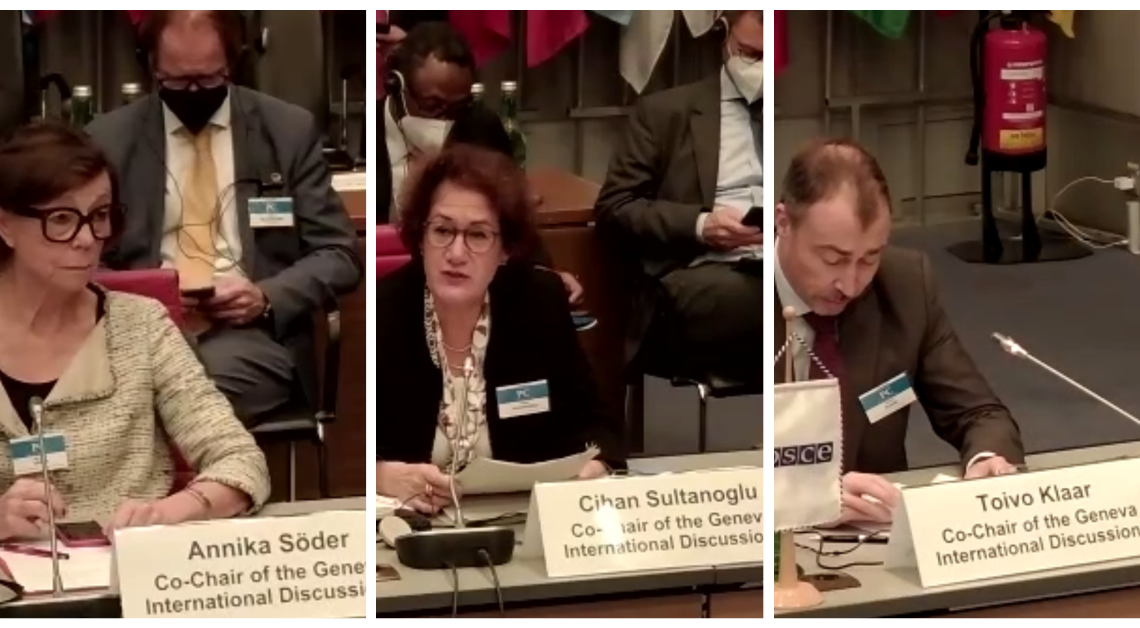 The Co-Chairs of the Geneva International Discussions

to the Permanent Council, Vienna
November 11, 2021

The suffering and hardships faced by people living in conflict-affected areas of Georgia have gone on for far too long.  Russia should be held accountable for its actions in Georgia and fulfill its obligation and its commitments under the six-point ceasefire agreement and implementation plan.  Regrettably, Russia has shirked its responsibility since invading Georgia’s sovereign territory in August 2008.  This invasion was a flagrant violation of international law and in contravention of the principles of the Helsinki Final Act, including respect for sovereignty and territorial integrity and refraining from the threat or use of force.  This disregard of state sovereignty and territorial integrity is not an isolated act; it is evidence of Russia’s irresponsible foreign policy and goals, whose effects are demonstrated in the range of conflicts affecting OSCE participating States.

The United States values the efforts made by you, as Co-Chairs, to move this conflict resolution process forward and to urge Russia, as a party to the conflict, to fulfill its ceasefire obligation and commitments.  We know this task is not an easy one.  In addition, we appreciate your efforts to promote discussions on women, peace, and security issues on the ground.  The United States values the unique role of the Geneva International Discussions format in pushing for implementation of the six-point ceasefire agreement and in maintaining security on the ground.  We urge all Geneva International Discussions participants to engage constructively in the 55th round of the discussions on December 7-8, following the 2021 OSCE Ministerial Council.

As you have reported, this year has been marked by some improvements as well as by unnecessary suffering.  We were pleased that several detainees were released before the 54th round of talks and call on Russia and the de facto authorities to completely end the practice of detaining civilians for seeking to visit family and cultural heritage sites, to engage in farming and other livelihoods, or to conduct other peaceful pursuits in conflict-affected areas.  We were saddened by the deaths of several Georgians while attempting to cross the Enguri River on April 7 and by the humanitarian crisis created by the pandemic and the restricted movement across the administrative boundary lines.  Since then, we have been encouraged by examples of effective cooperation between GID participants to find practical solutions to shared problems, particularly with respect to the COVID-19 pandemic.  We continue to urge all participants to find additional areas for cooperation, including by ensuring that all people in conflict-affected areas have access to COVID-19 vaccines and medical care.  We call on all GID participants to facilitate the unfettered access of humanitarian organizations to conflict-affected areas.

We would welcome the reestablishment of an OSCE field presence in Georgia capable of operating unhindered across the administrative boundary lines.  The return of a full OSCE mission, with full access to the internationally recognized territory of Georgia, is necessary for advancing opportunities to reduce tensions and support local populations.

The United States strongly supports Georgia’s sovereignty and territorial integrity within its internationally recognized borders and will continue to engage constructively in the GID process you lead.