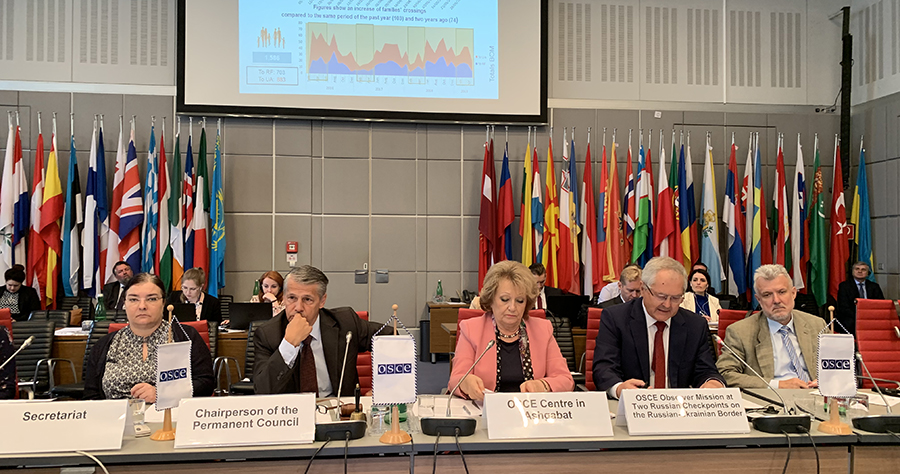 As delivered by Acting Deputy Chief of Mission Gregory Macris
to the Permanent Council, Vienna
June 13, 2019

Ambassador Varga, the United States welcomes you back to the Permanent Council and expresses appreciation for your detailed report. Your work remains critical to our understanding of the situation on the ground. We commend your close coordination with the SMM, which strengthens its reporting on what happens after trains and convoys cross into the conflict zone.

Regrettably, Russia obstructs the work of your monitors, impeding the mission’s ability to obtain an accurate assessment of activities at the border, particularly in terms of border crossings and vehicle inspections. Russia hinders monitors from interacting with persons at the border checkpoints. In this manner, it denies participating States valuable insight into the motivations and activities of persons crossing the border. Russia also prevents the mission from expanding its coverage along the border, which directly contravenes Moscow’s commitment to ensure permanent monitoring of the Russia-Ukraine border under the Minsk Protocol.

During the most recent reporting period, your monitors observed the movement of more than one million persons, with nearly 10,000 people crossing per day at the two BCPs. This daily total included nearly 400 persons in military-style outfits, some with badges or emblems of “DPR,” and “LPR,” or “Novorossiya.” These numbers underscore Russia’s control over the forces that it arms, trains, leads, and fights alongside in the Donbas.

The number of cargo trucks crossing the border increased over the previous reporting period, with nearly 13,000 trucks observed crossing. However, the observation teams remain unable to observe any of the X-ray checks conducted by Russian customs and border officials. As such, the mission cannot determine the nature of the contents of these vehicles.

In October of last year, the SMM’s UAVs spotted several convoys of trucks and military equipment crossing the border from Russia into Ukraine through unofficial crossing points. The limitations placed upon the Observer Mission by Moscow prevented the Mission from determining the contents of those trucks. The SMM reported last week that Russia and its proxies continue to use illegal border crossings under the cover of darkness to move supplies and personnel into eastern Ukraine.

We call on Russian to explain this activity to the Permanent Council. What is Moscow hiding in these secretive shipments? If, as Russia claims, these convoys contain legitimate humanitarian articles, why not provide transparency into these activities?

Only when the observer teams are granted unrestricted access to all areas of the BCPs and are allowed to witness the internal inspections of vehicles can we obtain an accurate picture of the situation on the ground. We call upon Russia to rescind its restrictive policies and afford the Mission the freedom and access it needs to fulfill its mandate along the internationally recognized Russia-Ukraine border, including in those areas controlled by Russia-led forces.

Ambassador, we again express our gratitude to you and your team for your continued efforts and dedication to this mission that is critical to achieving peace in the Donbas.