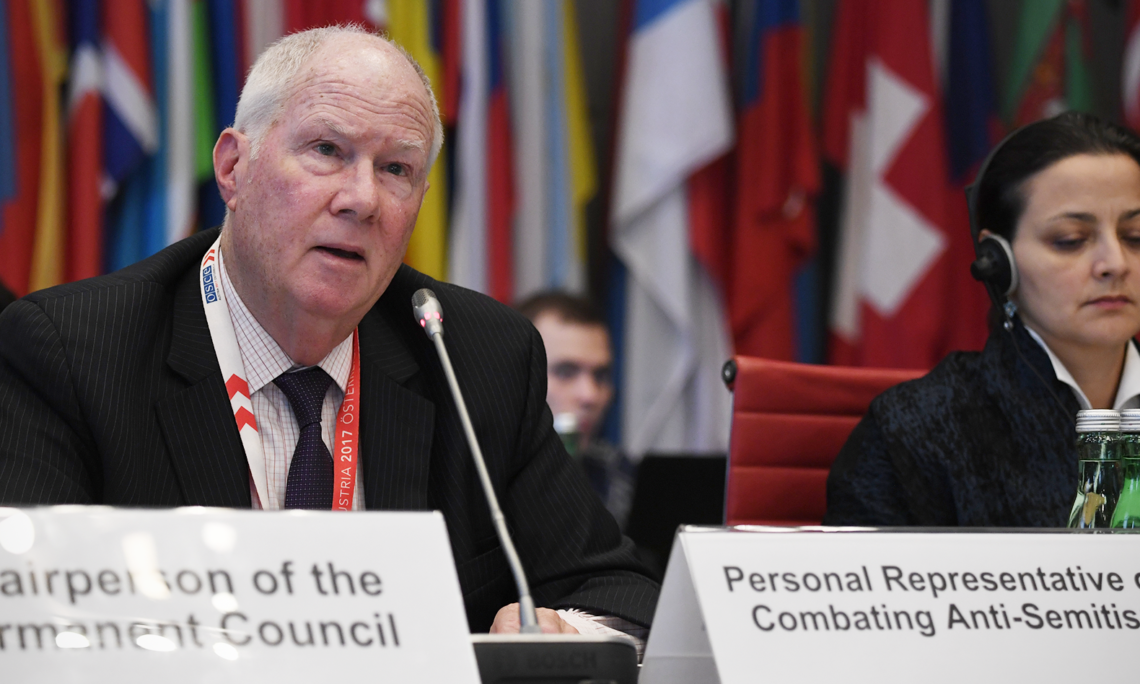 The United States warmly welcomes to the Permanent Council the Chairmanship’s Personal Representatives on Tolerance Rabbi Baker, and by remote link, Dr. Martinez and Professor Şenay.

We thank you for your ideas on how we can work together to further OSCE commitments on combating intolerance.

The Helsinki Final Act commits us to respect the inherent dignity of the human person. Beyond sharing commitments, we share a common humanity. There can be no justification for hate crimes – ever. People should not have to fear attacks because of who they are, whom they love, what they believe, or how they worship.

Anti-Semitic violence is on the rise across the OSCE region, and participating States should respond with immediate, corrective action. We urge all governments to denounce and combat anti-Semitism and to work with Jewish communities on how to best protect them. When we reject anti-Semitism by word and by deed – when we take a stand against intolerance and demand respect for the inherent dignity and human rights of every person – we give renewed meaning to “Never again.”

The 2004 Berlin Document states that anti-Semitism, and intolerance as a whole, threatens democracy, cultural values, and security. Yet, in 2018, age-old forms of anti-Semitism persist while new manifestations propagate with unprecedented speed against Jewish persons, places of worship, and property. We must reject anti-Semitism in all its forms and stand together against intolerance for the benefit of all individuals. The United States supports applying the International Holocaust Remembrance Alliance’s working definition of anti-Semitism and encourages participating States that have not yet done so to put it into practice. To act against anti-Semitism, it is essential for everyone to be able to recognize anti-Semitism in all of its ugly forms, be they traditional or under the guise of contemporary politics.

ODIHR’s “Words into Action” program has helped communities combat anti-Semitism and should be continued. We encourage the OSCE to develop complementary programs to address other manifestations of prejudice.

Hate crimes should be roundly condemned, thoroughly investigated, and aggressively prosecuted. A swift response to any criminal act sends the signal that such violence will not be tolerated.

Racial discrimination and hatred remain a scourge across the OSCE region. In particular, we note with concern that people of African descent and Roma continue to be targets of hate. The United States believes the OSCE can do more to combat racial discrimination by harnessing the creativity of experts in OSCE institutions. We welcome your thoughts on how we can strengthen our activities with this goal in mind.

We can do more to prevent and deter human rights violations and abuses against LGBTI persons and hold accountable perpetrators of anti-LGBTI violence and discrimination wherever they occur. LGBTI individuals are entitled to enjoy the same respect, freedoms, and protections as everyone else. We reject the assertions of some participating States that OSCE principles and commitments regarding respect for human rights and human dignity do not extend to individuals facing violence, discrimination, or criminal prosecution on the basis of their sexual orientation, gender identity or expression, or sex characteristics.

We should express our legitimate concern for the rights of persons belonging to national minorities in other countries, including those with whom we have affinities, but without ethnic double standards, inflammatory rhetoric, or destabilizing intent.

We welcome the Italian Chairmanship’s Rome Conference on Combating Intolerance and Discrimination with a Focus on Discrimination Based on Religion or Belief next week and we look forward to hearing more from the personal representatives there. The United States remains committed to working with the OSCE, governments, businesses, faith communities, and civil society groups across the region to condemn hatred and promote respect for the human rights of everyone.