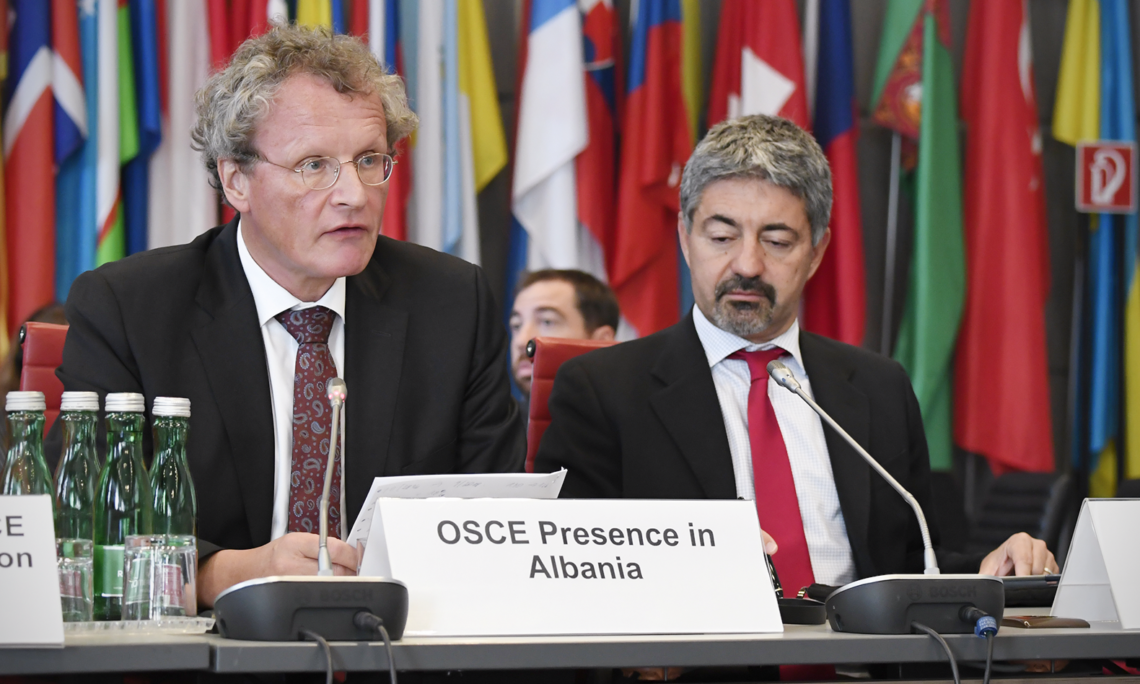 The United States warmly welcomes Ambassador Borchardt back to the Permanent Council. Thank you, Mr. Ambassador, for your presentation today and your informal presentation yesterday. We value the timeliness of your report, which gives participating States the opportunity to learn in greater detail about your work, to more effectively engage with you during these sessions, and to identify possible areas where we can be more effective in supporting you and your team carrying out your mandate.

The OSCE Presence in Albania has made significant progress in its 20-year history helping Albania combat corruption or organized crime, counter violent extremism, and reform the judiciary. We share your assessment that today, the overall political climate remains “tense and divided,” which has resulted in slow reform progress.

You identify judicial reform as the Mission’s top priority and note, correctly, that this is crucial to continuing Albania’s Euro-Atlantic integration, as well as to fulfilling its OSCE commitments. It is also critical to address other challenges: corruption, organized crime and, associated with these, the weak business environment. We welcome the OSCE Presence’s efforts to help the Albanian State Police strengthen its intelligence systems in line with democratic policing principles and to build sustainable forensic services. The Presence’s support of Albania’s National Coordinator Against Corruption and its Action Plan is an excellent example of how an OSCE field mission can coordinate its efforts with the host government.

Last year, following Albania’s parliamentary elections, we highlighted the need for Tirana to address the many recommendations made by ODIHR and the Council of Europe’s Venice Commission from 2013 and 2015. In our last response to you at the Permanent Council, last November, we encouraged the ad hoc Committee on Electoral Reform to coordinate with your office on taking real steps to implement those recommendations. Progress in these areas remains a pressing need. You are correct that time is limited, and we reinforce again our encouragement to the ad hoc Committee and to Albania’s political parties to redouble their efforts to implement the recommendations, with your office’s support wherever possible.

Finally, I want to touch on the OSCE’s attention to youth in Albania. USAID reported in July that 23 percent of Albania’s population is under the age of 15. A 2014 survey found that 80 percent of Albanian youth expressed a desire to leave their country. The Presence’s support to its Youth Advisory Group, the Regional Youth Cooperation Office, and #YouthTrail2018 is helping to promote OSCE values and help Albania to be a country in which its young people see their future.

Once again, Mr. Ambassador, we wish to express our appreciation for your office’s good work and your collaborative approach in helping Albania progress on its democratic, Euro-Atlantic path.