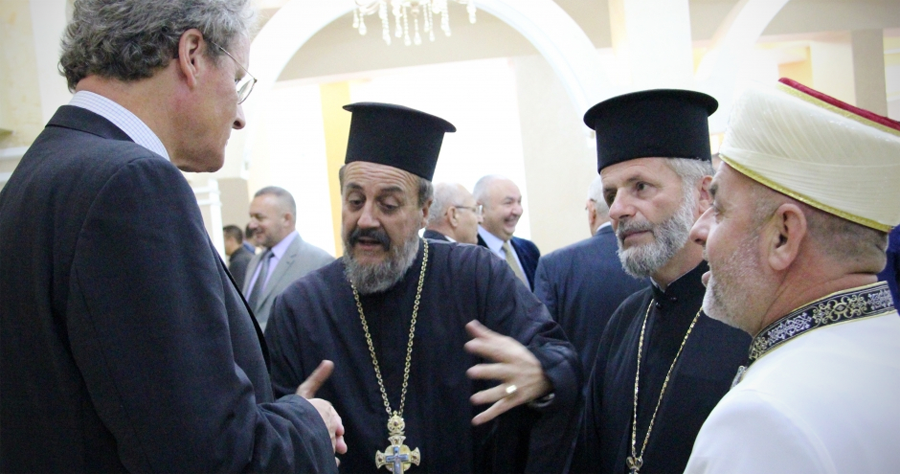 Head of the OSCE Presence in Albania, Ambassador Bernd Borchardt (left), talks with representatives of religious communities on the margins of a conference on countering violent extremism, Elbasan, Albania, October 12, 2016. (OSCE photo)

Response to the Report by the Head of the OSCE Presence in Albania, Ambassador Bernd Borchardt

The United States warmly welcomes Ambassador Borchardt back to the Permanent Council. Now in its twentieth year, the OSCE Presence in Albania has made significant progress in helping Albania combat corruption and organized crime, counter violent extremism, and reform the judiciary. Ambassador, we especially welcome the collaborative approach your mission has taken by partnering with the government of Albania, civil society, and the private sector, and very much appreciate the detailed comprehensive report you just provided. In my relatively short time here, I particularly appreciated the level of detail and the concrete projects, and the way in which you are engaging actively civil society and the wide range of actors on the ground in Albania. So, thank you very much for that detailed report.

Ambassador, we note the important work of your staff – with the support of ODIHR election observers – in assisting Albania with parliamentary elections in June. In its initial report, ODIHR found that contestants campaigned freely and fundamental freedoms were respected. These findings do indeed mark important progress. However, ODIHR also reported that Albania failed to address many of the recommendations made by ODIHR and the Council of Europe’s Venice Commission from 2013 and 2015, including the need to depoliticize key aspects of the election administration. In addition, ODIHR reported that public trust in the electoral process remains low. Consequently, the United States welcomed the first meeting of Albania’s electoral reform ad hoc committee on November 10. Mr. Ambassador, I welcome your commitment that you put forward in your statement to working closely with ODIHR. We encourage the committee to take real steps – in coordination with the OSCE Presence in Albania – to implement the ODIHR and the Venice Commission recommendations.

The OSCE is also supporting Albania’s efforts to develop an Advance Passenger Information (API) System. The use of API data in traveler screening is a key element of UNSCR 2178, which seeks to improve global efforts to deter terrorist travelers. In support of this goal, the OSCE sponsored a national workshop, and assisted Albania in the development of an API roadmap. This constructive work complements well U.S. bilateral assistance focused on expanding the use, analysis, and sharing of air traveler data at ports of entry. The United States will also continue to support Albania’s efforts to integrate the use of passenger name record (PNR) data in traveler screening. When used with API, we believe that PNR can help security officials counteract “broken travel” and/or identify potential high-risk travelers. We encourage you and your mission to continue working with the government of Albania and international partners in this field. Improved border screening will strengthen security in Albania and in the region, particularly as the OSCE helps the host government develop the corresponding legislation to support this initiative.

Ambassador, you noted in your statement that you and your mission continue to prioritize work against violent extremism and radicalization, and we support those efforts. We also appreciate your effort to bring together religious and local leaders to challenge radicalization at the community level during the recent ‘United in Countering Violent Extremism Conference’. Your mission has also been active in developing Albania’s National Action Plan against Cannabis Cultivation and Trafficking for the period 2017 to 2020. We applaud your willingness to tackle some of Albania’s – and the region’s – most pressing and high-profile challenges. The United States stands ready to forge even closer coordination with your office in pursuing shared goals to build Albania’s capacity in these important areas.

Ambassador, like you, we recognize that more work remains to be done. Corruption and criminality indeed remain obstacles to prosperity in Albania. Tirana’s Prosecuting Attorney is currently investigating more than 3,000 cases of patronage hiring and firing during the 2017 election campaign period, a concern that has been raised by ODIHR as well. In one such case, a former interior minister – who is now a Member of Parliament – has been implicated in Italy for supporting drug traffickers. Mr. Ambassador, addressing these and other problems, coordination among international stakeholders will continue to be one of the keys to success.

In closing, the United States once again thanks you for your mission’s hard work and collaborative approach in helping Albania move forward on its democratic, Euro-Atlantic path. Congratulations again to the OSCE Presence in Albania for its twentieth year of assistance, and we look forward to hearing about more successes in the coming year.