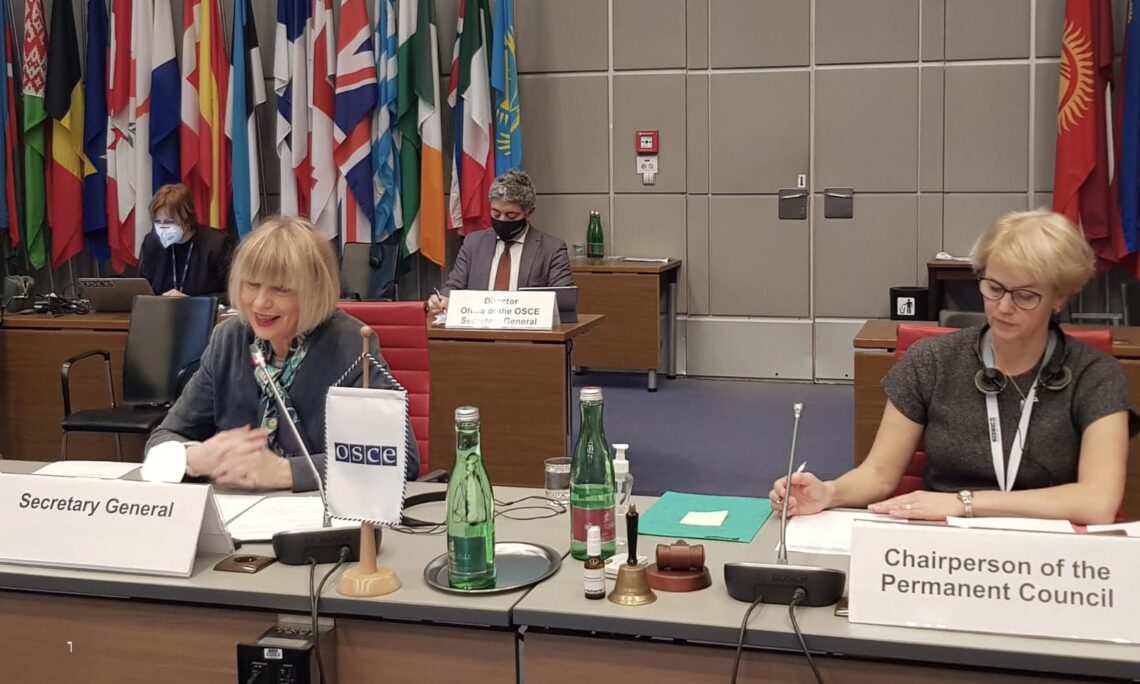 Madam Secretary, the United States warmly welcomes you to the Permanent Council as you begin your tenure as Secretary General of the OSCE.  As President Biden leads the United States to bolster our engagement with the international community, we look forward to working with you to strengthen security in the OSCE region.  It is essential participating States uphold their commitments in all three dimensions — political-military, economic-environmental, and human.  We are confident, Madam Secretary, that you will develop strong partnerships with the new heads of the independent institutions, and that together, according to your respective responsibilities and mandates, you will advance the OSCE’s core mission.

Madam Secretary, you assume your role as Secretary General at a time when this Organization faces unprecedented challenges to its foundational Helsinki Final Act principles.  Russia’s ongoing aggression in eastern Ukraine, occupation of Crimea, and blatant disregard for international norms continues to erode security in the region, now for a seventh year running.

The Special Monitoring Mission in Ukraine (SMM) is the OSCE’s principal tool for providing objective and impartial information about the situation on the ground.  Why does Russia block SMM access to the Crimean peninsula and the internationally recognized border between Ukraine and Russia?  Why do the forces it trains, leads, funds, and fights alongside harass SMM personnel in eastern Ukraine?  The United States strongly supports the implementation of the Minsk agreements and the efforts of the Trilateral Contact Group under the able leadership of Heidi Grau.

As a Minsk Group Co-Chair, the United States will continue to work in concert with France and Russia—and with the CiO’s Personal Representative—to help Armenia and Azerbaijan negotiate a peaceful political settlement to the Nagorno-Karabakh conflict based on the guiding principles of the Helsinki Final Act.  We continue to attach high value to the OSCE’s support to the Geneva International Discussions on the Conflict in Georgia, and the 5+2 Settlement Process on the Transnistrian Conflict.  The OSCE Mission to Moldova plays a role in providing participating States with information about the situation on the ground, including on Russia’s military activities in Moldova.  OSCE Field Operations are the OSCE’s “crown jewels.”  They should be enabled and encouraged to provide objective information about the situation in their host countries, engage with civil society, and have straightforward conversations with their hosts on implementing their OSCE commitments in all three dimensions.

We also need to maintain focus on the violent crackdown in Belarus.  Authorities in Minsk continue to commit human rights violations against peaceful protesters, journalists, and other Belarusians seeking to exercise fundamental freedoms since the falsified presidential election of August 9, 2020.  We continue to strongly support the joint offer by the current and previous Chairs-in-Office, Sweden and Albania, to facilitate a dialogue between the Belarusian authorities and the National Coordination Council.  The OSCE is well-positioned to support the democratic aspirations of the people of Belarus, if given the opportunity.

Given the OSCE’s mandate to prevent, respond to and resolve conflicts, we should review the OSCE’s conflict cycle toolbox.  During last year’s Annual Security Review Conference, we presented a number of suggestions such as working with the Parliamentary Assembly, promoting the role of technology throughout the conflict cycle, and advancing the role of women in the conflict cycle.  The 10th anniversary of the 2011 Ministerial Council Decision on the “Conflict Cycle,” affords us a useful opportunity to look for concrete ways to strengthen our toolbox.

Madam Secretary, OSCE’s work in the human dimension remains essential to achieving lasting security in this region.  The conditions for building healthy, resilient societies, prosperity and peace are created when participating States implement their OSCE commitments on human rights, the roles of civil society and independent media, democratic principles and processes of government, the rule of law, promoting tolerance, and eradicating torture.  The annual Human Dimension Implementation Meeting, or HDIM, is OSCE’s premier forum for governments and civil society to hold participating States accountable for meeting human dimension commitments and for discussing ways to improve performance.  We deeply regret the HDIM was not held as intended in 2020 due to the pandemic.  The United States believes strongly the HDIM must be held this year, with the undiminished access and participation of civil society.

The OSCE also has a unique role to play in identifying and helping participating States to address the far-reaching consequences of the pandemic in all three dimensions.  This must include the economic and environmental dimension—where of course the pandemic’s impact has been incalculable.  We must also join together to invigorate work on environmental issues in the second dimension.

For the OSCE to carry out the mandates entrusted to it by participating States, this Organization needs to have solid financial footing.  We look forward to swift passage of the Unified Budget for 2021.  We also look forward to engaging with you on your efforts to reform the Secretariat to help it meet today’s needs, and to advance gender equality within the OSCE’s executive structures, including through strengthening internal governance and accepting zero tolerance for harassment.

So glad to have you here, Secretary General Schmid.  We relish the opportunity to work with you closely to ensure this organization meets its full potential.