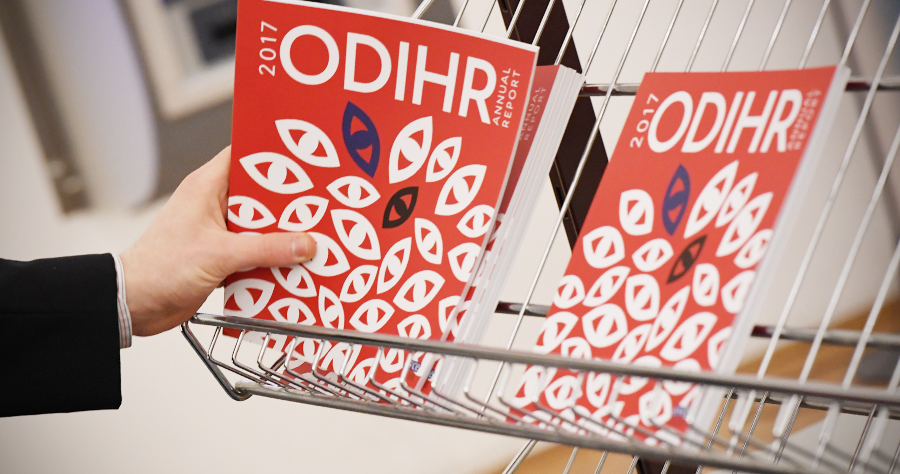 Response to the Report of Ingibjörg Sólrún Gísladóttir, Director of the OSCE Office for Democratic Institutions
and Human Rights

Madam Director, the United States warmly welcomes you back to the Permanent Council. Earlier this week I had the opportunity over a few days to strengthen my understanding of ODIHR’s activities and exchange views with ODIHR about how we can more effectively coordinate in our efforts. As a result, I have a much greater appreciation for the professionalism and dedication of your staff in carrying out your mandate in often quite difficult circumstances. I commend you on a well-run operation, which no doubt will continue to strengthen under your leadership.

Madam Director, the United States values your timely submission of ODIHR’s annual report. The report illustrates the broad scope of ODIHR activities and the depth at which your staff engage programmatically to help participating States meet their commitments. The amount your Office accomplishes with relatively limited resources is, frankly, a testament to ODIHR’s efficiency and commitment. The United States is proud to support your programs, including those aimed at combating hate crimes, fighting trafficking in persons, supporting the political participation of persons with disabilities, engaging Roma and Sinti youth, and bolstering democratic elections, to cite a few. ODIHR’s election monitoring activities in 2017 and planned activities for 2018 are especially impressive. We support your focus on women’s rights and gender equality as cross-cutting issues that need to be firmly incorporated into every project.

The annual report also demonstrates the clear link between the human dimension and our shared security. The regrettable failures of some participating States to implement their OSCE commitments does not render those commitments any less valid, nor the Organization’s concept of comprehensive security any less true: respect for human rights and democratic principles of government is as essential to security and stability as is respect for the sovereignty and territorial integrity of States. The OSCE is, and will continue to be, a major contributor to regional security and stability. And ODIHR plays a major role in that security. Accordingly, we encourage ODIHR to conduct monitoring and issue a follow-on report to its 2015 joint report with the High Commissioner on National Minorities on the human rights situation in Crimea.

Mr. Chair, our human dimension events are crucial. They provide governments and civil society organization representatives, including human rights defenders, a platform for an open, wide-ranging exchange of views on how human dimension commitments are kept or broken, and on ways participating States can improve their performance. It is imperative that we do not silence these voices.

To be as effective as possible, these events need advance preparation. And as a result, the United States urges all participating States to join consensus now on the dates proposed by the Italian Chairmanship for the 2018 Human Dimension Implementation Meeting. Delay in the decision raises the costs – costs that we all will pay.

Madam Director, we share your observation that 2017 regrettably was marked by a shrinking space for civil society. Civil society and independent media are indeed under considerable pressure in a number of participating States. Civil society needs the OSCE’s support now more than ever. The United States opposes any attempts to reduce or unduly restrict civil society’s access to and participation in OSCE proceedings. We will continue to champion the courageous efforts of civil society organizations and activists across the region. We also oppose any efforts that would result in a watering down of human dimension events and work.

Mr. Chair, as Secretary Tillerson said in December during the OSCE Ministerial Council meeting, the United States “will reject efforts to weaken any of [the OSCE’s] institutions.” Let me reassure you, Madam Director, that the United States will continue working with you, the Italian Chairmanship, and other concerned States to strengthen ODIHR and to defend its autonomy, mandate, and budget.