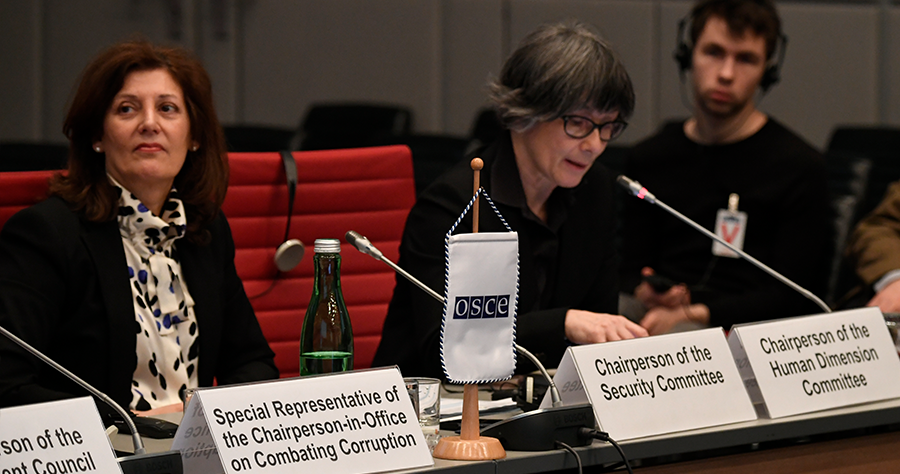 The OSCE's First and Third Committee Chairs, Ambassador Gonzalez Roman and Ambassador MacLeod share their committee reports with the Permanent Council on December 13, 2018.

The United States warmly welcomes our distinguished Chairs from the First and Third OSCE Committees. Thank you for your leadership and for promoting a collaborative approach among the committees.

Ambassador Gonzalez Roman, the United States commends you for focusing this year on key issues of relevance across the OSCE. You have challenged us to think more closely about Foreign Terrorist Fighters, protecting soft targets, gender equality from a security perspective, and cross-cutting issues like the effect of transnational organized crime on the environment and its impact on security. This year’s Security Committee meetings allowed for exchanging ideas between participating States’ delegations and experts as we strengthened the collective security of the OSCE region.

We were disappointed that two important draft decisions – on FTFs and on the trafficking of cultural property – did not reach consensus in Milan. Nevertheless, we are grateful for your team for many months of hard work to bring them to the Ministerial. Addressing both issues is critical to effectively counter terrorism and transnational organized crime. We will support your efforts and look forward to continuing collaboration in these areas in the coming year.

Ambassador MacLeod, the United States thanks you and the United Kingdom for your principled and practical leadership of the Human Dimension Committee over the past two years. Your focus on pressing human dimension concerns throughout your tenure was vital at a time when human rights and fundamental freedoms – and the civil society members who defend them – are under pressure across our region. You selected timely topics for discussion on issues of gender-related violence, hate crimes, freedom of expression, and freedom of religion or belief, to name just a few.

Under your leadership, for the first time in four years, we reached consensus on a Third Dimension text, the Ministerial Council Decision on the Safety of Journalists. OSCE participating States can point proudly to being in the vanguard on these important and timely issues. However, we are disappointed we were not able to achieve consensus on other important texts in Milan last week. We look forward to using the many OSCE tools available to us, including through this Committee, to advance work on the full range of Human Dimension issues.

The United States stands ready to engage with the Czech Committee Chair in building upon your team’s excellent work. We urge the incoming Chair to continue your practice of involving OSCE’s independent institutions, field missions, and civil society in our discussions, as well as promoting voluntary reporting, which helps us gauge progress and highlight the continuing implementation challenges that participating States face.

We hope that cooperation with the OSCE Parliamentary Assembly will grow in the coming year. The United States commends Chairman Voridis’ recent trip to New York and Washington and his substantive discussions of counterterrorism strategies and programs with U.S. officials.

The United States joins other delegations in expressing its appreciation to the distinguished Chairs for your leadership. Your committees’ work embodies the OSCE’s comprehensive concept of security. You have our full support.