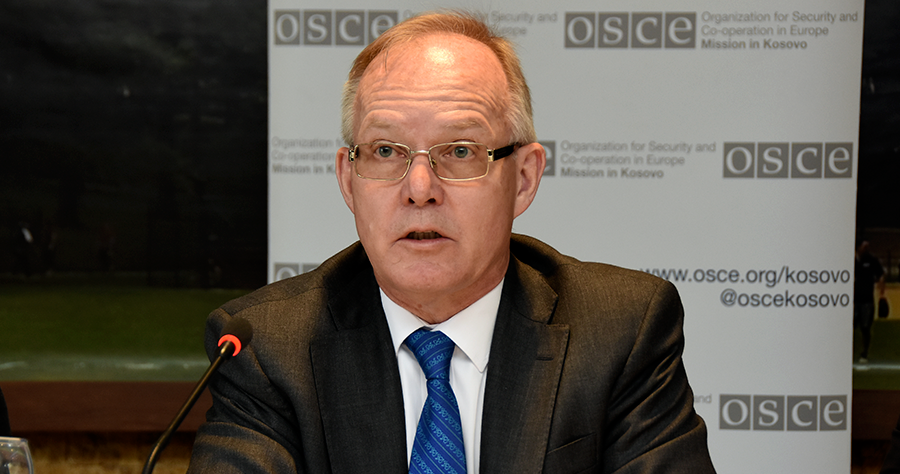 Head of the OSCE Mission in Kosovo, Ambassador Jan Braathu, addresses a panel discussion on the rights of victims of crime to compensation. Istog/Istok. 10 May 2018.

The United States welcomes Ambassador Braathu back to the Permanent Council. Thank you for your dedication to furthering intercommunal dialogue, enhancing local governance, and ensuring the legislative framework promotes peace and prosperity in Kosovo.

Ambassador Braathu, we value the timely distribution of your report as well as your active participation in yesterday’s informal meeting. The United States has seen tremendous progress in the Western Balkans in recent years, though, as your report describes, obstacles remain. We commend the mission for adapting to unfolding developments, ensuring maximum effectiveness in the face of new challenges. We appreciate that the Mission’s role in Kosovo’s elections, including the Kosovo Serb-majority areas, has evolved in response to maturation of the Kosovo state. Ultimately, normalizing relations between Kosovo and Serbia is the only way to clear the paths of both countries’ to full integration into Europe and to the democratic communities of nations. It is critical that all parties de-escalate tensions, remove all obstacles to the Dialogue talks – this includes Kosovo lifting the tariffs – and focus on reaching a comprehensive agreement. The United States is ready to support the parties to reach a solution that is durable, implementable, and one that contributes to regional stability.

Ambassador Braathu, the United States agrees with your approach of mainstreaming youth and gender across the Mission’s activities. Kosovo’s population is young, and its women and girls still struggle to realize their full potential. The OSCE-supported Dialogue Academy and “Follow Us” initiative are models for building networks among professional women from across the region. We also appreciate the OSCE Mission in Kosovo’s municipal-level approach to facilitate the return of displaced persons through the new Guidelines on Implementation of the Regulation on Displaced Persons and Durable Solutions. Localized, community-based security, and education initiatives are key to Kosovo’s future.

Kosovo faces serious shortcomings in the Rule of Law, an area that still demands OSCE attention. Kosovo’s judicial institutions made progress this year and brought indictments on a handful of important cases, including a case alleging high-level fraud in the awarding of veterans’ pensions. OSCE should continue to help build the capacity of Kosovo’s judicial institutions, which also involves the continued integration of Kosovo-Serb officials throughout Kosovo, in close coordination with engaged international partners like the United States. The Mission-supported internship program for integrating Kosovo-Serb legal professionals is a step in the right direction.

Ambassador, the United States again wishes to express our appreciation for the outstanding work you and your staff have done to advance our shared goals in Kosovo. You have our full support.