Home Home | News & Events | Response to the OSCE Representative on Freedom of the Media: Statement to the PC 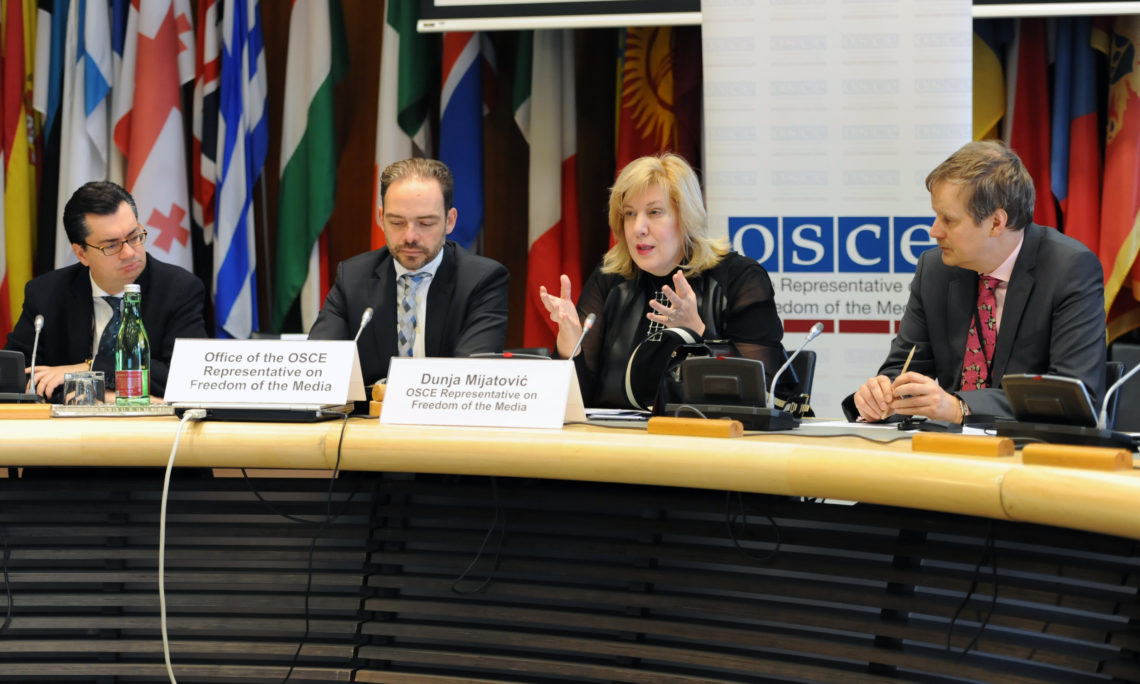 The OSCE Representative on Freedom of the Media, Dunja Mijatović, giving opening remarks at an expert meeting in December 2015. (OSCE)

Today’s meeting is bittersweet. For while we of course welcome the Representative on Freedom of the Media and thank her for the 15th installment of her always-inspiring remarks, today also marks the end of her second term of exemplary service to the OSCE.

For the last six years, Ms. Mijatović has met the highest standard of professionalism, energetic devotion, and expert diligence. Her leadership has brought distinction and credibility not only to the institution she leads, but to the OSCE as a whole.

Security in Europe is under threat, and the Representative and her small but effective team are an indispensable asset in advancing comprehensive security. Participating States’ OSCE commitments to freedom of expression and freedom of the press are foundational to our societies’ ability to meet so many other challenges—whether it’s countering corruption, holding government and leaders accountable for reform, resisting the manipulations of propaganda, or building successful, diverse societies. When we fail to uphold our commitments on freedom of expression and impede freedom of the media, we make our states and our region less resilient, less prepared for the 21st century, and less secure. By helping participating States fulfill their commitments and objectively calling them out when their actions fall short or run counter to those commitments, the Representative on Freedom of the Media supports a more secure OSCE region.‎

Representative Mijatović, your work has been exemplary. You have diligently implemented the mandate given to you by all 57 participating States, and effectively used our shared OSCE commitments as the basis for making expert, objective recommendations and assessments. You have raised concerns, but always with an evident intent to help make a difference, not merely to make a point. You and your team have engaged tirelessly to help participating States review draft laws, reform their approach to public broadcasting, and better implement their OSCE commitments.

The United States especially appreciates the way in which you have helped participating States enhance their understanding of emerging issues that have a direct impact on the freedom of expression  in the media and our OSCE commitments to uphold human rights. You recognized early on that media freedom and internet freedom are inseparable, and your 2013 conference made a major contribution to framing our debate and enhancing understanding. You have tackled the difficult issues of how to counter hate speech and the use of propaganda as an instrument of warfare while upholding international law and OSCE commitments. You’ve highlighted the way that impunity for murder and harassment of journalists creates a climate of fear and self-censorship. You brought much needed attention to the particularly vile attacks directed at women journalists, especially online. Through it all, you have set an example in terms of your engagement with civil society and with journalists themselves, enriching your work with participating States and building the credibility of the OSCE.

Ms. Mijatović has a well-used pen, she has written to Ambassadors and Ministers over the last six years – as we heard she has written over a thousand times –, raising issues of concern or a step forward to their attention. I received what was, at least I thought, the last of these letters from you last week. I shared it with colleagues from Washington, as I have before, and I will follow up with your office, as I have before. Thank you for always helping us, and for pushing us, to look for opportunities to do better.

We listened closely to your words today, not only highlighting the substantive issues of the day, for example upholding human rights while countering terrorism, but also to your advice on how we can improve the way that we are set up for the future,  including by properly resourcing your office. We also join you in congratulating your team – a small but mighty team that does outstanding work.

Mr. Chair, colleagues, Dunja Mijatović is a consummate professional in her work. Yet, for Dunja, the professional was also always personal. Her own life experience—including living through war in Bosnia holed up in the basement of an apartment building in Sarajevo—left her with a clear view and deep personal appreciation for the importance of principled leadership; for human rights; for empathy, compassion, and respect for human dignity. She has often spoken about the way this experience has inspired her commitment to a free and independent media and to building the kind of strong, resilient societies that thrive on the free exchange of ideas. Having witnessed the tragedy of war first-hand, she also gained a perspective that kept her going when the going got tough—she learned to dismiss insults and focus instead on doing her job ‎with grace, wisdom, and wit.

For that, and for her example, we are grateful. And we wish her all the best on the road ahead, whether in Vienna or beyond.

Thank you, Dunja, and thank you, Mr. Chair.