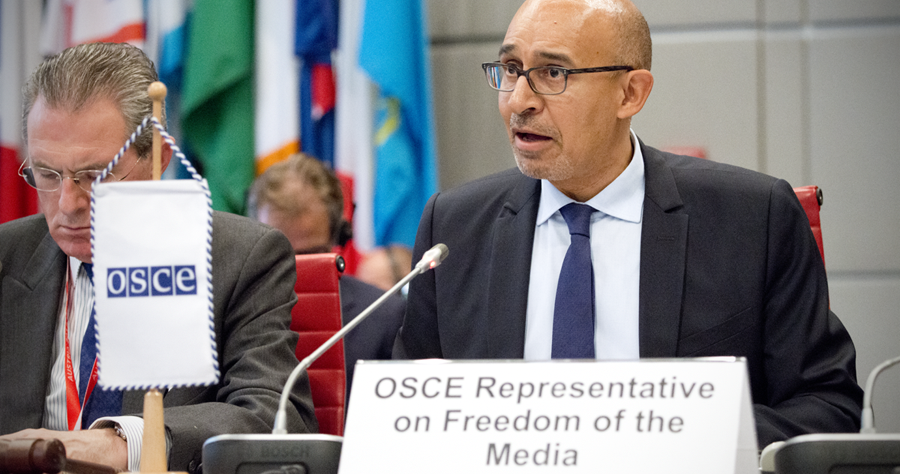 The United States warmly welcomes the Representative on Freedom of the Media (RFoM) Mr. Harlem Désir back to the Permanent Council and expresses our appreciation for his comprehensive report. Allow me also to thank those delegations, and you, Mr. Désir, for your expression of solidarity with the Capital Gazette staff and the entire media community in the United States over the June 28 shooting that took five lives in Annapolis, Maryland. As President Trump recently said, “this attack shocked the conscience of our nation and filled our hearts with grief.” The President noted further that “journalists, like all Americans, should be free from the fear of being violently attacked while doing their job.”

Mr. Chair, the United States strongly supports the RFoM, an essential institution in ensuring that participating States fulfill their commitments regarding freedom of expression, including for members of the media. We have and we will continue to strongly support the RFoM’s independence, its budget, and its mandate, all of which allow it to respond quickly to threats against media freedom throughout the OSCE region – both on and off line – and to address emerging challenges in an ever-changing media landscape. Now more so than ever, we need early warnings to respond in a timely and effective way to threats to media freedom.

As other delegations around the table have already noted, media freedom is indeed vitally linked to international security. Those societies where governments respect the right to free expression and ensure the ability of journalists to report freely are the most open, the most peaceful, and the most able to cooperate internationally. Freedom of speech and of the media are fundamental values of the United States, and are embedded in the First Amendment of our Constitution.

Mr. Desir, in your report, you highlight specific threats to media freedom across the OSCE region, and I would like to touch upon a few.

Both domestically and abroad, Russia seeks to undermine freedom of expression. We condemn the Russian government’s ongoing efforts to suppress dissent and increase its surveillance of and control over the Internet in the name of national security. We reiterate and join the RFoM’s concern about the blocking of communications application Telegram, and other excessive restrictions on social networks.

The United States is concerned by the deteriorating conditions for journalists and independent media in the areas of Ukraine controlled by Russia-led forces. Mr. Désir, we support your call for Russia-led forces in the Donbas to release imprisoned journalist Stanislav Aseyev. In Russia-occupied Crimea, all independent news outlets have been forced out of the peninsula, and anyone who expresses public opposition to this occupation is subjected to prosecution and imprisonment.

In Turkey, more than 150 journalists are in prison and nearly 200 media outlets have been shuttered since the July 2016 coup attempt. The United States recognizes the grave security challenges that Turkey faces. At the same time, we do not believe these challenges justify excessive limitations on freedom of expression, even when the speech is controversial or uncomfortable.

Across Central Asia, serious restrictions on freedom of expression remain. Independent journalists in Tajikistan face regular interrogation by security officials, intimidation, and blackmail. In Kazakhstan, independent media and journalists have faced legal intimidation. Uzbekistan is indeed showing progress, releasing a number of journalists who had previously been imprisoned for political reasons.

In Azerbaijan, we also continue to be disturbed by the January 12 sentence of journalist Afgan Mukhtarli on charges widely considered to be politically motivated. We urge the government of Azerbaijan to release Mr. Mukhtarli and others incarcerated for exercising freedom of expression. We also urge the government to remove obstacles to the professional activities of journalists, such as those imposed on Khadija Ismayilova, and to cease blocking independent online media platforms.

Mr. Chair, promoting safe environments for journalists to conduct their work is critical, and we continue to be shocked and saddened by the untimely deaths of many journalists. We agree with the RFoM on the importance of holding all perpetrators responsible. Full, transparent investigations should be the norm.

I would like, however, to mention one issue that you did raise in your report, and that regards the Foreign Agents Registration Act (FARA). While we have had the opportunity in the Permanent Council to discuss this issue at great length – and I feel quite confident that I, and members of my delegation, as well as authorities in the United States have been able to respond to the questions and the concerns that have been expressed – in light of the fact that you mentioned this in your report, I feel obliged to correct what I consider to be a certain false narrative, and that regards media freedom under attack in the United States. Mr. Désir, Russian outlets RT and Sputnik continue to broadcast freely in the United States. FARA simply aims to add transparency by ensuring the U.S. public knows when the source of information is a foreign principal. FARA does not – as I have repeatedly stated – does not limit what these outlets can broadcast or publish. These Russian outlets continue to choose to register under FARA, after the Department of Justice explained the requirements under the statute. And finally, I think it is important to reiterate a point that I have mentioned earlier: there is no equivalency between FARA and the Russian “foreign agent” law, which is used to restrict, intimidate, and persecute civil society and an independent press.

Mr. Chair, as a member of the informal Group of Friends of the Safety of Journalists, the United States supports today’s side event on “Killing of Journalists: The Tip of the Iceberg.” We look forward to an active discussion, and the thoughtful participation, on behalf of all participating States.

Finally, we look forward to continuing to work closely with the RFoM, other delegations, the Italian Chairmanship, and the Secretary General to defend and support media freedom and the freedom of expression across the entire OSCE region.