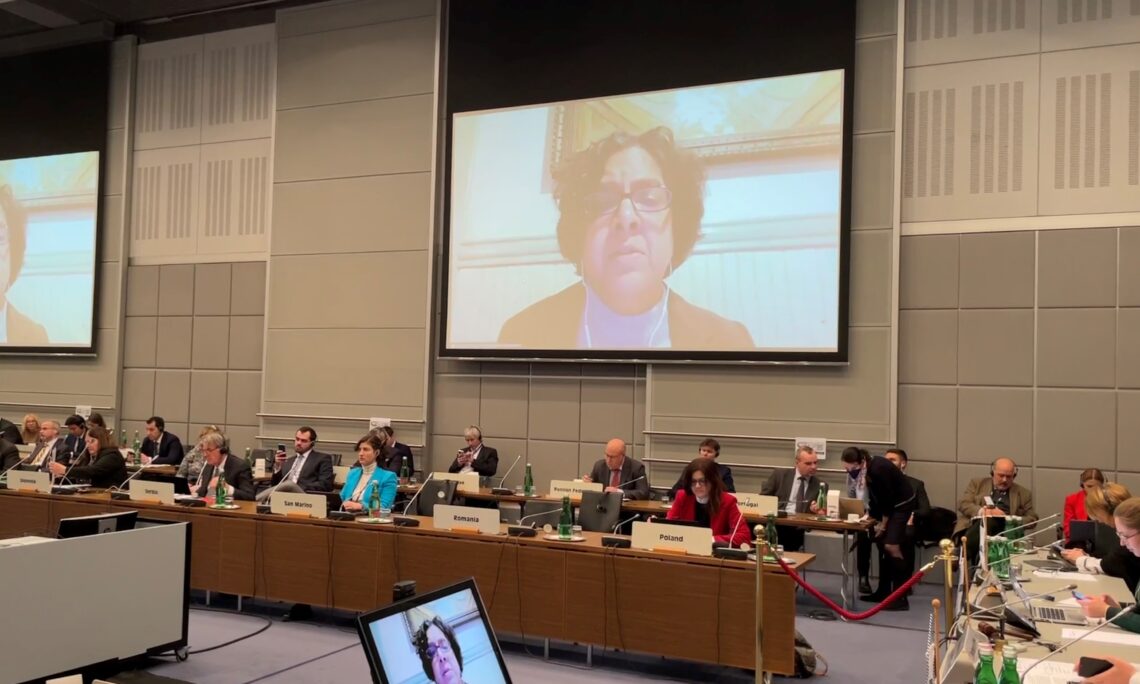 As delivered by Ambassador Michael Carpenter
to the Permanent Council, Vienna
December 15, 2022

Special Representative Ramasastry, dear Anita, it is a pleasure to hear at least the first part of your presentation.  Even if we did not hear the end, we know what you intended from your written remarks.  Your work is more important than ever.  Corruption is a clear and present danger to our comprehensive security.  It undermines military readiness, serves as a drag on economic growth and a waste of precious resources, and is often used by autocrats to retain power, violate human rights, and undermine democracy and rule of law.  For the United States, fighting corruption is a core national security imperative, and we thank you for the expertise, creativity, and effort you have demonstrated in helping counter this corrosive threat – as well as for your adaptability to changing circumstances, including – most especially – Russia’s aggression against Ukraine.

©, which is why your role and the support the OSCE can provide to participating States is essential.  We know that corruption exacerbates virtually every global challenge we face, from war and conflict, to pandemics and disaster response, to climate change and human rights.  It is no coincidence that some of the most brutal dictatorships in the world today, including Russia and the People’s Republic of China, are kleptocracies.  Whenever internal repression begets external aggression, you will invariably find that corruption is the glue that binds the two sides of the coin together.

Your approach to fighting corruption is particularly effective since you apply your toolkit to those participating States that genuinely want to root out this scourge and build their own resilience.  We applaud your creative efforts to work across dimensions as described with different OSCE bodies with our field operations, and the other Special Representatives.  The effectiveness of such a cross-dimensional, multi-sectoral approach is apparent in your engagement with the OSCE’s work in promoting asset recovery and social reuse.  This is a powerful anti-corruption tool and remains one of the most effective ways to disrupt organized crime.

We appreciate your leadership in driving innovation in new areas within the Organization, such as corruption prevention in the aftermath of the COVID pandemic and supporting good governance commitments during the green energy transition.  These are both timely and urgent topics.  Finally, the United States fully supports your report’s recommendations – in particular, your call to remain focused on existing obligations and commitments like the implementation of the UN Convention Against Corruption; procurement, digitalization, and legislative reforms; as well as your recommendations for a gender-based approach to anti-corruption.

Mr. Chair, in line with our National Strategy on Countering Corruption, the United States seeks to promote accountability for corrupt actors and disrupt and deter those whose actions would undermine democracy, rule of law, and economic prosperity.   That is why President Biden designated the fight against corruption as a core national security interest, and why the United States partnered with Transparency International to co-host the International Anti-Corruption Conference in Washington last week.  We were pleased that you, Anita, participated in a panel at this conference along with OCEEA Coordinator Ambassador Hasani on behalf of the OSCE.  We are looking forward to hosting the 10th Conference of the States Parties next year as we celebrate the 20th anniversary of the UN Convention Against Corruption.  We will continue to prioritize the important role of our existing multilateral architecture and of civil society in the fight against corruption.

We applaud the important and meaningful work done by you, Madam Special Representative, to promote good governance and enhance accountability during your tenure.  You have our full and enduring support