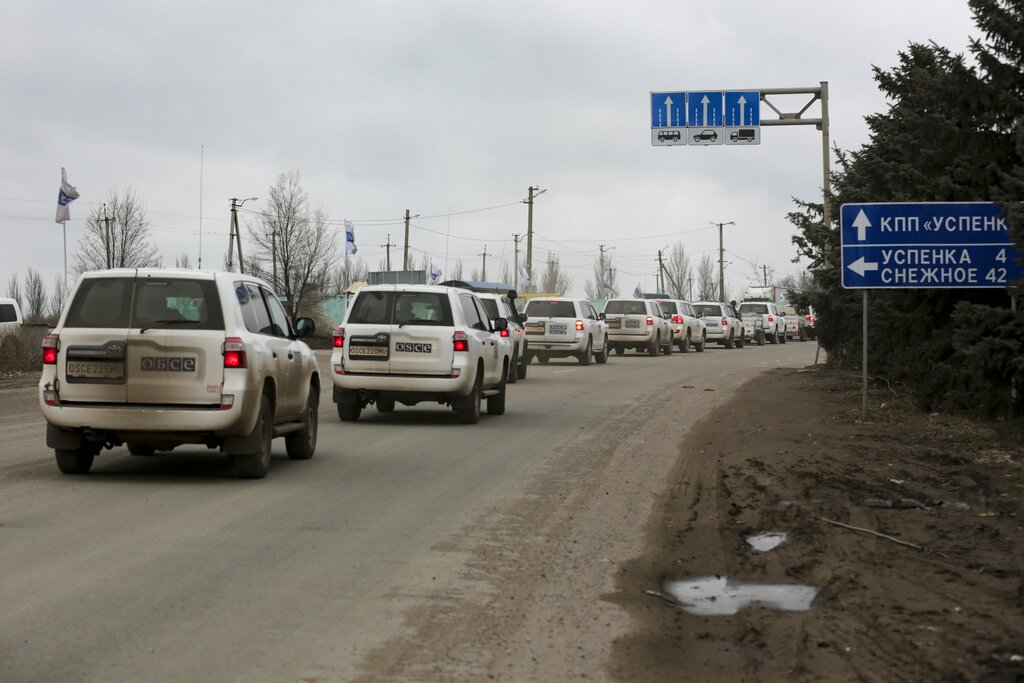 A convoy of vehicles of the OSCE mission line up to leave Donetsk People Republic, the territory controlled by pro-Russian militants, near the Uspenka checkpoint toward Ukrainian-Russia border, eastern Ukraine, Tuesday, March 1, 2022. (AP Photo/Alexei Alexandrov)

Response to the Report by Ambassador Henrik Villadsen, Project Co-ordinator in Ukraine

Ambassador Villadsen, dear Henrik, the United States welcomes you back to the Permanent Council.  In the face of Russia’s war of aggression against Ukraine, the work that you and your team are performing – under extraordinarily difficult circumstances – is among the most vital and important this organization is currently undertaking anywhere in the OSCE region.  Indeed, we believe all participating States around this table should prioritize and support the cross-dimensional work of the OSCE in Ukraine.  As the saying goes, “put your money where your mouth is.”  The integrity and effectiveness of this organization is at stake as we face the biggest security and humanitarian crisis in Europe since the Second World War.  This is not a question of whether we can adapt; we simply must act now.

Dear Henrik, we are very grateful for your leadership.  In that respect, I would like to first express our appreciation for the concern you have underscored for the safety of your staff, both international and especially national, in the face of Russia’s full-scale invasion of Ukraine.  Members of the Special Monitoring Mission have been detained and some have gone missing in eastern Ukraine.  This is completely unacceptable. No one should be a target because of their unbiased and loyal service to this Organization.  This applies to local staff members of both the SMM and PCU missions, without exception, and we call for the immediate release of those staff currently in detention.

The Project Coordinator in Ukraine (PCU) has done valuable work on behalf of the people of Ukraine for some 23 years; however, this work has been especially urgent and essential since February 24.  Your dedication and commitment to getting back into Ukraine, in the service of sustaining existing programs and projects and helping to address the enormous humanitarian needs is to be commended.

Your office quickly recognized the vulnerability to human trafficking faced by the millions of refugees and displaced persons forced to flee their homes by Russia’s war of aggression.  Anti-trafficking efforts by the PCU, including through the activation of the National Referral Mechanism, have provided an important tool to support Ukrainian citizens seeking safety and relief from the war that has been imposed on their country.  We also appreciate the continued work of the PCU on areas including war-related challenges to constitutional justice; cybersecurity; and the work of – and risks to – journalists in wartime.

We agree that your office must remain flexible and adaptable in order to best help the victims of this war.  This includes contributing to addressing the massive need for humanitarian assistance, and I’d like to commend those participating States who joined us in answering this call – Slovakia, Poland, Luxembourg and Finland.  We all recognize that the OSCE is not a humanitarian organization per se, but neither should it stand idly by in the face of the biggest humanitarian crisis in decades.  We look forward to hearing more about the contributions the PCU could make in tandem with international partners to address the exigent need to build capacity for humanitarian demining, and to address the illicit trafficking of small arms.

Ambassador, the enormity of the devastation that is being wrought on Ukraine by Russia’s forces is almost beyond comprehension, and it will take significant time and resources to help Ukraine rebuild – indeed to survive and thrive – as a sovereign, independent, democratic state: more resilient, more united, and stronger than it’s ever been before.  From the U.S. perspective, that is our goal. And we strongly believe the OSCE can and must play a prominent role in support of this goal.  As soon as conditions permit, we look forward to the PCU expanding its work to the entirety of Ukraine within its internationally recognized borders, including Crimea, per your office’s mandate.  Please know that the PCU can count on the gratitude, appreciation, and continued support of the United States as the office plays its vital role in supporting Ukraine now and into the future.