Home Home | News & Events | Response to the Report by Head of the OSCE Mission to Montenegro, Ambassador Maryse Daviet 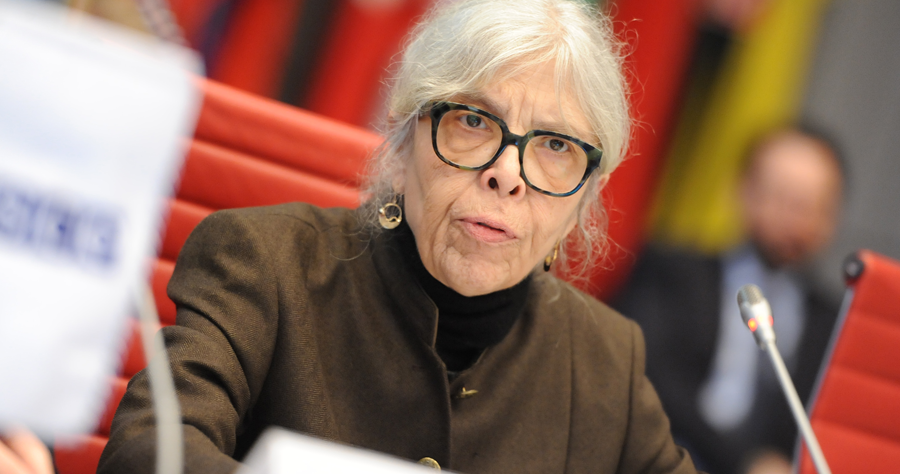 Ambassador Maryse Daviet, Head of the OSCE Mission in Montenegro speaking at the OSCE Permanent Council in Vienna.(OSCE/Micky Kroell)

Response to the Report by Head of the OSCE Mission to Montenegro, Ambassador Maryse Daviet

As delivered by Acting Deputy Chief of Mission Gregory Macris
to the Permanent Council, Vienna
February 28, 2019

Ambassador Daviet, you and your team have contributed to Montenegro’s development through your Mission’s efforts to strengthen democratic institutions, the rule of law, a flourishing civil society, and respect for human rights. The OSCE Mission to Montenegro has demonstrated how a mission’s flexibility and alignment with national priorities for reform provide strategic impact. More needs to be done to fight corruption and organized crime and to end attacks on independent media, but the country has made notable progress over the past year.

The United States strongly supports Montenegro’s transition to a prosperous, market-based democracy, fully integrated into Euro-Atlantic institutions, including NATO and the European Union. We share the view of Montenegro and its neighbors that Euro-Atlantic integration offers the best assurance for the country’s independence, security, economic development, and the well-being of its people.

Corruption and crime remain a threat to the country’s aspirations, as they undermine financial sector stability. Montenegro’s financial institutions need strong, professional oversight and regulation. The United States was pleased to see that the government welcomed an independent audit of the Montenegro Central Bank. We hope the bank will now undertake, in coordination with international partners, a comprehensive stress test and review of asset quality across the banking sector to assure investors of its ability to supervise private banks. Your mission’s complementary efforts in building institutional capacity and the tools to combat money laundering contribute to improving governance and professionalization of the banks.

Madam Ambassador, the United States regrets the constriction of media freedom in Montenegro over the past year. In June, despite strong reservations raised by the United States and others, the government in Podgorica removed the independent director of the public broadcaster. Subsequent to the director’s dismissal, the broadcaster has received criticism for biased reporting in support of the ruling party. We also note the concerns expressed by the OSCE Representative on Freedom of the Media (RFoM) in January regarding the sentencing to 18 months in prison of journalist Jovo Martinović.

We note positively the arrests in the May 2018 shooting of journalist Olivera Lakić as an important step by the government toward bringing the perpetrators of this crime to justice. We expect the Montenegro authorities to identify and prosecute the perpetrators of attacks on several other journalists. At present, those crimes continue to go unpunished. We appreciate your office’s efforts to support media freedom, and we encourage you, in light of the Milan Ministerial Council decision on the Safety of Journalists, to redouble your efforts to reverse a concerning downward trend.

Finally, the United States remains deeply concerned about malign foreign efforts to undermine Montenegro’s democratic institutions and processes. As ODIHR reported after the 2016 elections, and as you referenced in your report, Serbian and Russian citizens were arrested for plotting an attempted attack on Election Day. In 2017, Foreign Minister Darmanović told Parliament that Russian security services had tacitly facilitated the planning. We commend the government of Montenegro on its stewardship of this case and its efforts to strengthen its democratic institutions to thwart foreign malign acts. We also welcome the mission’s ongoing efforts to improve Montenegro’s electoral process as a line of defense against malign influence.

Thank you once again, Ambassador Daviet, for the outstanding work that you and your dedicated team are doing at the OSCE Mission to Montenegro. You have our full support.