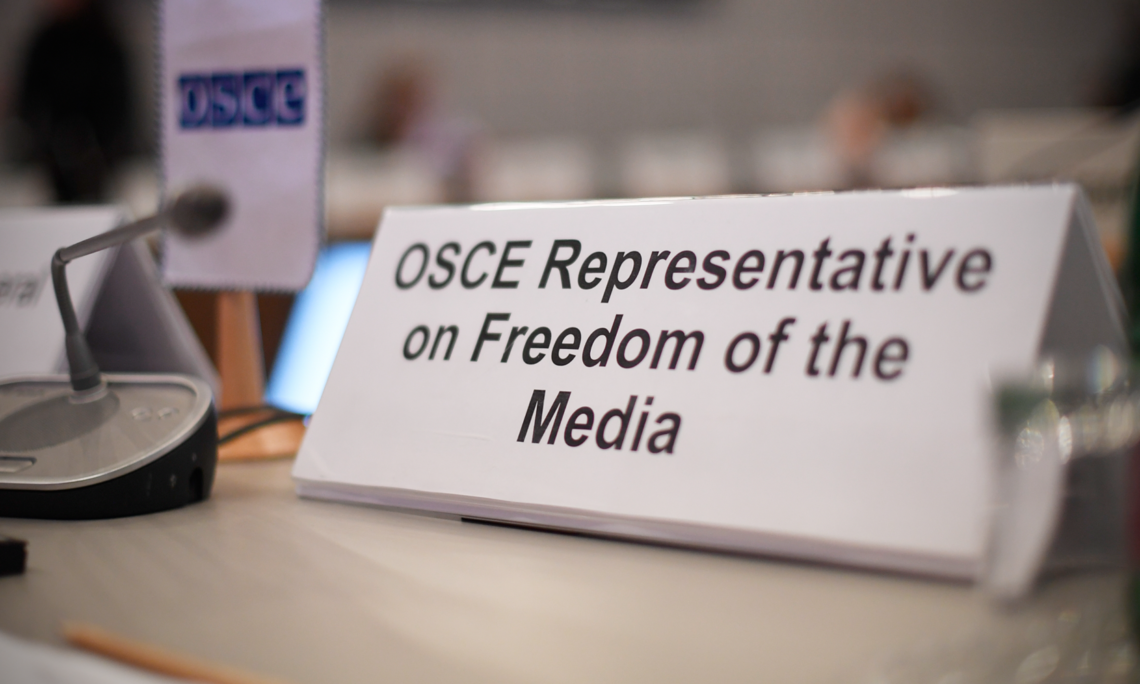 OSCE Representative on Freedom of the Media nameplate at the OSCE Permanent Council, Dec. 1, 2016. (USOSCE/Colin Peters)

The United States is delighted to welcome OSCE Representative on Freedom of the Media (RFOM) Dunja Mijatović back to the Permanent Council. At a time when too many countries in the OSCE region are restricting the space for critical voices and independent journalism, your office has been a vocal and courageous advocate for freedom of expression, including freedom of the media, both on- and off-line.

On behalf of the United States, let me join my colleagues in thanking you for your thoughtful and comprehensive report. We welcome and appreciate your candid assessment of media freedom concerns in the United States – a critical element of fulfilling your mandate. We take your concerns seriously and have sought to respond to your letters and requests for information in a timely manner. And we would call on other participating States to do the same.

I want to thank you in particular for the constructive input you provided earlier this year on the U.S. Department of Defense Law of War Manual. Your suggestions and the feedback we received from media organizations and civil society helped improve the manual, ensuring the revised text reflected U.S. support for the protection of journalists under the laws of war.

I want also to recognize the RFOM’s efforts on internet freedom, recalling the obligation of States to respect and ensure human rights and fundamental freedoms, whether exercised online or offline. Your collaboration with private sector and international partners – notably the Council of Europe – has helped keep our shared values at the forefront of conversations on digital and social media – including with respect to how governments and industry leaders can most effectively respond to the proliferation of online threats, trolls, propaganda, and fake news while respecting freedom of expression and without engaging in censorship or imposing undue restrictions.

The United States also commends your efforts to improve journalist safety and ensure accountability for attacks on journalists. In too many places around the world – including too many parts of the OSCE region – those who threaten, kidnap, beat, and kill journalists for the content and conduct of their work do so with impunity. As you, Ms. Mijatović, have said many times, the key to addressing this problem is political will on the part of governments in those countries in which such impunity continues. The United States is deeply committed to working to end impunity for crimes against media professionals, and we will continue to work in good faith with your office and like-minded participating States to address the issue of impunity squarely and forthrightly.

Ms. Mijatović, the United States shares your concern that some participating States are broadening their campaigns against press freedom by arresting journalists, raiding their offices, and shutting down news outlets for expressing views that run counter to those in power. Let me reiterate what the United States has said many times in this and other fora: security should not be used as an excuse for silencing critical voices, and journalists should not be jailed for doing their job.

The fundamental freedom for individuals to seek, receive and impart information – which our distinguished Russian colleague just quoted – is under persistent threat in Russia, where authorities use harassment, sweeping “anti-extremism” laws, and intimidation to instill fear in those who would speak their minds and report their experiences. In February, Russia levied charges against blogger Anton Nosik after he refused to take down a LiveJournal post expressing his views on Syria. Last December, Russian courts sentenced Vadim Tyumentsev, Darya Polyudova, and Oleg Novozhenin to prison for social media posts critical of repressive Russian policies, corruption, and intervention in Ukraine.

In occupied Crimea, Russia has created a pervasive climate of fear in which unrestricted media has been all but stamped out. All independent media outlets have relocated to Kyiv after being denied accreditation by Russian occupation authorities, and independent journalists have fled en masse after an escalating campaign of threats and pressure, including raids on their homes and politically motivated prosecutions. We reiterate our call on Russia and its occupation authorities to drop all charges against imprisoned Crimean journalist Mykola Semena and to cease restrictions on his freedom of movement, allowing him to receive needed medical treatment outside of the peninsula.

Belarus remains one of the most restrictive media environments in the OSCE region. Despite the encouraging release of all its political prisoners last year, freelance journalists are systematically denied accreditation.  Independent reporters continue to face fines, harassment, violence, and seizures of equipment.

Media restrictions continue in Central Asia, often justified in the name of combating extremism, or to shield top officials from public criticism. In Tajikistan, authorities have intermittently blocked access to social media and news websites in an effort to curtail people’s access to information that may dispute the government’s narrative or call its decisions into question. In Turkmenistan, we have seen troubling instances of apparent efforts to intimidate journalists. International press still have great difficulty in accessing the country, much less receiving accreditation.

The United States also shares the concerns of global press freedom advocates, international organizations, and Hungarian citizens about the steady decline in media freedom and restrictions on independent media voices in Hungary. The sudden closure of Hungary’s largest independent newspaper Népszabadság in October and the continuing consolidation of news outlets in the hands of well-connected government supporters seriously diminish media pluralism. We encourage the Hungarian government to ensure a pluralistic media environment that exposes its people to a diversity of viewpoints and opinions, a key component of our shared democratic values.

In Turkey, the United States is deeply concerned by an increase in official pressure on opposition media outlets since the events of July 15. As we’ve said many times, the United States supports the Government of Turkey’s efforts to bring to justice those responsible for the July 15 coup attempt. As Turkey’s friend and ally, we encourage the government to ensure that the rule of law and fundamental freedoms are protected, and to allow full and unfettered access to the internet and social media, which played an important role in helping face down the attempted coup. Democracies become stronger by allowing diverse expressions of views, particularly in difficult times.

Colleagues, this year, here in the Hofburg, we have heard too many calls for increased “professionalism” and “responsibility” on the part of journalists. Usually, we hear this from participating States that have a long history of impeding freedom of expression, who seek to restrict independent media, and who practice state monopoly or state control of the media. The media professionals who seek to report the facts, who strive for objectivity, balance, and fairness, or who offer viewpoints contrary to those of the government know that their first obligation is to inform their fellow citizens and contribute to public discourse, and that governments should be accountable to the people they serve.

We must stand up for the courageous media professionals persecuted for doing their jobs, and to protect and defend the freedom they need and deserve – as Ms. Mijatović has done throughout her tenure as Representative on Freedom of the Media.

Mounting pressure against civil society and independent media is accompanied by some participating States’ efforts to undermine the OSCE’s independent institutions, including the RFOM. We oppose any weakening of OSCE institutions, of the integrity of their mandates, or of their budgets. The RFOM must remain independent in order to fulfill its mandate and to call out participating States that act contrary to their international obligations and OSCE commitments. Likewise, the RFOM must be fully resourced to carry out its mandate effectively.

Ms. Mijatović, you have worked tirelessly to advance the principles and commitments that we have all undertaken. Thank you for being bold and outspoken, for holding each of us to the same standard, and for your willingness to work constructively with all participating States to address the issues and concerns you identify in good faith.

Ms. Mijatović, in closing let me express the sincere gratitude and appreciation of the United States for your professionalism, and reiterate our commitment to participating in a competitive process to identify a fearless, determined, effective successor who will further strengthen the institution of the RFOM and build on your record of achievement in the years ahead.

Mr. Chair, if I may just respond, since my delegation was raised in the statement of our distinguished Russian colleague, to two points he made.

The third criticism that he offered of my delegation and others: that we have not raised concerns about EU countries. Obviously, I just raised some concerns on behalf of the United States about an EU country in our statement today, and that is not the first time that we have raised concerns about EU countries. So it’s simply a false claim that the United States has not raised concerns, but I would also note that we have multiple channels for raising concerns. Most often, especially when we know that the countries are partners in good faith, we raise concerns not only publicly but also privately in order to be as effective as possible in communicating them. And so, not everything that we say gets said here in the Permanent Council.