Home Home | News & Events | Response to the Report by the Head of the OSCE Centre in Ashgabat, Ambassador John MacGregor 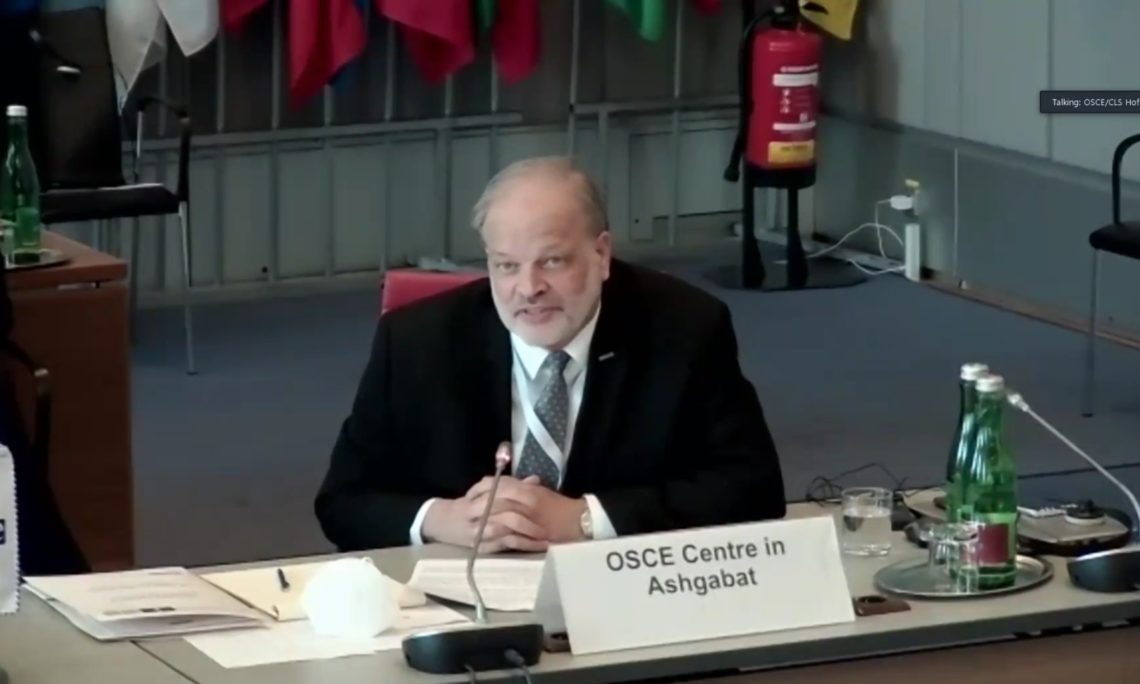 Report by the Head of the OSCE Centre in Ashgabat, Ambassador John MacGregor.

Response to the Report by the Head of the OSCE Centre in Ashgabat, Ambassador John MacGregor

We commend the Center’s efforts in the First Dimension, including notably the cooperative border management activities between Turkmenistan and Afghanistan and enhancing regional connectivity, including travel along the Lapis Lazuli corridor.  We support efforts to counter violent extremism and radicalization that leads to terrorism.  Could you please share some details of your experience with the Leaders Against Intolerance and Violent Extremism Program?  Have you received feedback from the local community?  We appreciate the Center’s support as Turkmenistan establishes an Advanced Passenger Information (API) data system.

In the Second dimension, we recognize steps made on anti-corruption and good governance.  We welcome the advancement of a framework on Anti-Money Laundering and Countering the Financing of Terrorism in line with Financial Action Task Force recommendations.  We note, specifically, the cooperation among the Center, national institutions, and the UN Office on Drugs and Crime on training to reduce corruption, increase transparency, and government accountability.

While we commend the Center’s efforts to advance human rights, including freedom of religion or belief and the rule of law, we cannot ignore the severe restrictions of human rights and fundamental freedoms in Turkmenistan.  We encourage the host nation to work with the Center to mark progress in fulfilling its commitments in the human dimension, including respect for human rights and fundamental freedoms.  We note the Ministry of Education’s Memorandum of Cooperation with the High Commissioner on National Minorities and view it as an important step in promoting diversity and social integration.

The Center’s development of higher education modules on freedom of expression for journalism faculties and support for implementation of the media freedom-related provisions in Turkmenistan’s National Human Rights Action Plan 2021-2025 are welcome initiatives.  We urge the Center to continue its support for media freedom and civil society development.

The United States values gender mainstreaming in project activities.  We support the Center’s work to mitigate domestic violence, particularly strengthening referral mechanisms for potential victims.  We are pleased the forum on the Role of Women in Fostering Peace, Trust, and Security, which the Center co-organized, featured representatives from academia, civil society, and regional governments.

The United States reiterates its concern for the victims of enforced disappearances.  We call on the government of Turkmenistan to provide specific information about each of the many individuals whose whereabouts are unaccounted for after they entered the prison system.  We remained concerned by the disappearance of former OSCE Permanent Representative Batyr Berdiev and the lack of information about him.  We urge the immediate provision of information on these missing prisoners so that their families may finally know the truth about their fate or whereabouts.  We remind Turkmenistan of the commitment it made regarding the 2018 UN Universal Periodic Review and call upon Turkmen authorities to end enforced disappearances and unconditionally release all those incarcerated for exercising their human rights and fundamental freedoms.

We believe the host government could benefit from OSCE assistance on penitentiary reform.  The Center’s seminar on implementing legal standards in the penitentiary system is a step in the right direction and we hope to see further cooperation.

We recall the UN Committee against Torture issued a report in 2017 on Turkmenistan which expressed concern about “consistent allegations of widespread torture and ill-treatment, including severe beatings, of persons deprived of their liberty, especially at the moment of apprehension and during pretrial detention, mainly in order to extract confessions.”  In keeping with the 2020 OSCE Ministerial Council Decision on the Eradication of Torture, we call on the government of Turkmenistan to take immediate steps to uphold its commitments.

Ambassador MacGregor, again we thank you and your dedicated team for the work at the OSCE Center in Ashgabat.  We value your efforts.  In conclusion, I’d like to ask you what issues do you believe the Center can best advance in the coming year?