Home Home | News & Events | Response to the Report by the Head of the OSCE Mission to Moldova, Ambassador Claus Neukirch 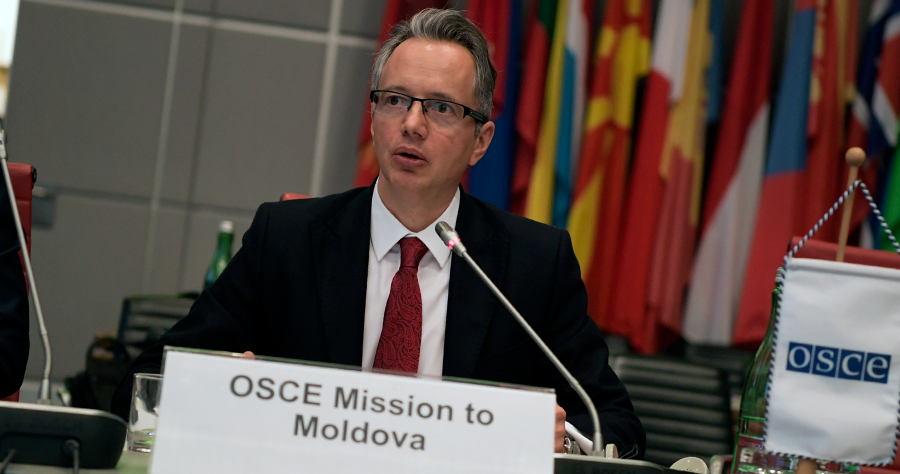 The Head of the OSCE Mission to Moldova, Ambassador Claus Neukirch,, delivers his mission's report. (USOSCE/Gower)

Response to the Report by the Head of the OSCE Mission to Moldova, Ambassador Claus Neukirch

The United States commends the Mission for maintaining an active presence in the Security Zone.  As we noted during your last appearance at the Permanent Council, freedom of movement throughout Moldova while ensuring health and safety is possible.  Any “pre-authorization” requirements for travel to or from Transnistria should be suspended.

The increased number of patrols in the Security Zone is noteworthy, yet do not reveal the full situation.  A critical part of the Mission’s mandate includes monitoring the munitions depot at Cobasna, per Russia’s 1999 Istanbul Summit commitment to withdraw its forces and equipment.  Lack of progress on this issue and of transparency regarding movements of Russian forces or military equipment are a matter of interest to the 57 OSCE participating States and require a vigilant OSCE observation mission with full access throughout the region.  We call on all parties, including Russia, to facilitate Mission access to all sites of concern.

The United States stands ready to work with the Mission and other international partners to facilitate under OSCE aegis the removal or disposal of ammunition and armaments stored at Cobasna.

The United States remains committed to working with the OSCE and other partners in the 5+2 framework to attain a comprehensive settlement based on the sovereignty and territorial integrity of Moldova within its internationally recognized borders and with a special status for Transnistria.  We look forward to the 3+2 meetings for negotiators and observers scheduled next week in Chisinau and Tiraspol, the first such sessions since 2019.

We support your work and that of the Special Representative to keep channels of communication open and continue with the settlement process, such as convening virtual meetings and advancing confidence building measures.  It is regrettable we have not made further progress on implementation of the confidence building measures from the 2017 “Package of Measures” (Berlin Plus).  We look forward to resumed implementation, laying the groundwork to allow the process to move to discussion of core political and security issues in the third basket of the agreed 5+2 agenda.  It is logical the Special Representative report together with the Head of Mission at future Permanent Councils.

We are troubled by the ongoing crackdown on freedom of expression and political dissent in Transnistria, as well as the arrest and detention of several individuals on charges of “extremism,” and holding illegal protests, or “insulting” the Transnistrian leader.  We echo your concern expressed here today for the health of Mr. Horjan.  We welcome your news related to hopefully upcoming access for medical attention for Mr. Horjan.  We hope it will also also include Adrian Glijin, and Stanislav Minzarani.  We also call particular attention to the cases of Ghenadie Ciorba, Sergy Mirovich, Boris Babaian, Mihail Ermurachi, and Roman Iamboglo.

We remain deeply concerned by the Transnistrian de facto authorities’ 2020-2026 Strategy for Combating Extremism which authorizes new repressive tools to further repress freedom of expression.  The strategy goes hand-in-glove with the repressive 2007 measures on fighting extremism, which have been used by the de facto authorities to suppress dissent.  We stress the importance of media pluralism and independence, and of the public’s access to reliable information.

We expect the July 11 parliamentary elections to be free, fair, transparent, and respect the will of the Moldovan citizens.  Moldova conducted a Presidential election last November.

We note the final report of ODIHR’s Limited Election Observation Mission found “the organization of the election was professional, despite the challenges posed by the pandemic and legislative gaps” and voters had distinct political alternatives to choose from.  There is room for improvement, however.  We urge Moldova to work with the Mission, ODIHR, and the Venice Commission to address shortcomings in campaign finance oversight, election-dispute resolution and vote buying.  We encourage Moldova to set a new date for elections to the People’s Assembly of Gagauzia and call on the Moldovan Parliament to consider all necessary legislation on a special legal status for Gagauzia.

The Mission’s work, together with that of the High Commissioner on National Minorities, to promote inclusive governance is hugely important as Moldova continues to strive for a just, tolerant, and inclusive society.   Your report describes the crucial role civil society plays and we are pleased the Mission was able to organize its annual Donors’ Forum online.

We welcome the Moldovan government’s adoption of a national action plan to promote Holocaust remembrance and combat racism and intolerance.  The establishment of the Jewish History Museum and the adoption of legislative amendments on hate crimes would be additional positive steps forward.

We encourage the Mission to collaborate with Moldovan authorities and civil society to respond to increases in domestic violence under shelter-in-place and quarantine measures during the declared State of Emergency and subsequent State of Public Health Emergency.  Could you please tell us more about the Mission’s work to promote gender equality through women’s political participation, including in the 5+2 settlement process, and to combat domestic violence?

In conclusion, the United States will continue to support a sovereign, democratic Moldova, firmly anchored in Europe, secure within its internationally recognized borders, and enjoying the benefits of effective and accountable government.