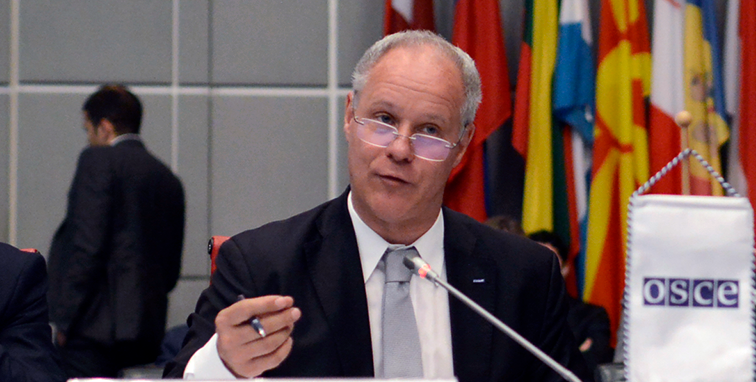 Response to the Report by the OSCE Project Co-ordinator in Uzbekistan, Ambassador Pierre von Arx

Thank you, Madam Chair, and good morning everybody.

The United States welcomes Project Coordinator Pierre von Arx to the Permanent Council for the first time in his new role.  Thank you, Ambassador, for your detailed report and presentation.

The United States appreciates the Project Coordinator’s work across all three OSCE dimensions.  Unfortunately, the pandemic continues to impact every sphere of life, and as noted in your report, the Mission was also forced to adapt.  We applaud your team’s determination to fulfill its mandate amid these challenging circumstances and commend your commitment to dialogue with governmental officials and civil society partners.

Uzbekistan’s October 2021 presidential elections will be a milestone for the country’s political reform process.  We ask the Project Coordinator to support efforts to ensure these elections are free and competitive.

It is particularly important that the government allow new political parties to register and opposition candidates to participate.  We note your support for ODIHR Director Mecacci’s visit and are encouraged you are preparing for ODIHR’s likely observation of the upcoming elections.  Would you be able to provide us an update on the implementation of recommendations outlined by ODIHR and the Venice Commission in its October 2020 Joint Opinion on the Draft Law “on Freedom of Conscience and Religious Organizations?”

We are glad to see the Mission facilitating Uzbekistan’s access to the entire OSCE toolkit.  The United States also commends your coordination with international partners through frequent meetings at all levels to facilitate convergence of efforts and expand awareness of the Project Coordinator’s resources.

We appreciate the Mission’s work with the government to combat transnational security challenges and to sustain emphasis on the importance of upholding human rights commitments when shaping strategies to combat violent extremism and counter radicalization that leads to terrorism.  We were encouraged to see the second year of your joint training program with ODIHR on human rights and anti-terrorism policing yield positive results so quickly.  The United States also supports your ongoing efforts regarding independent media in Uzbekistan, including the environment for bloggers and international journalists.  We remain concerned, however, about legal changes criminalizing slander, including online slander against the president.  Freedom of expression—including the freedom to criticize leaders—is an essential element for good governance.  We appreciate the Project Coordinator’s calls for the government to follow through with promises made by President Mirziyoyev that emphasize freedom of expression, including for online and offline media.  In the Second Dimension, we applaud the Mission’s ongoing work on the use of Open Data to support greater transparency and good governance, as well as on Women’s Economic Empowerment and Transboundary Environmental Initiatives.  We are proud to have supported the series of successful workshops on corporate governance and compliance this February under the extrabudgetary project to improve business integrity standards.  By reducing corruption, we improve economic growth.

As the U.S. Mission co-hosted a side event this week at the Conflict Cycle seminar on Women, Peace, and Security and UNSCR 1325 implementation, I would welcome hearing from you how implementation of UNSCR 1325 is bolstered by the Project Coordinator and how can we best support you?

Ambassador von Arx, thank you again for your comprehensive report.  The United States remains a stalwart partner of Uzbekistan and a strong supporter of the OSCE Project Coordinator in Uzbekistan.  We wish you every success and are confident the Project Coordinator’s work across all three OSCE dimensions will continue to contribute to the development of Uzbekistan as well as comprehensive security in Central Asia.