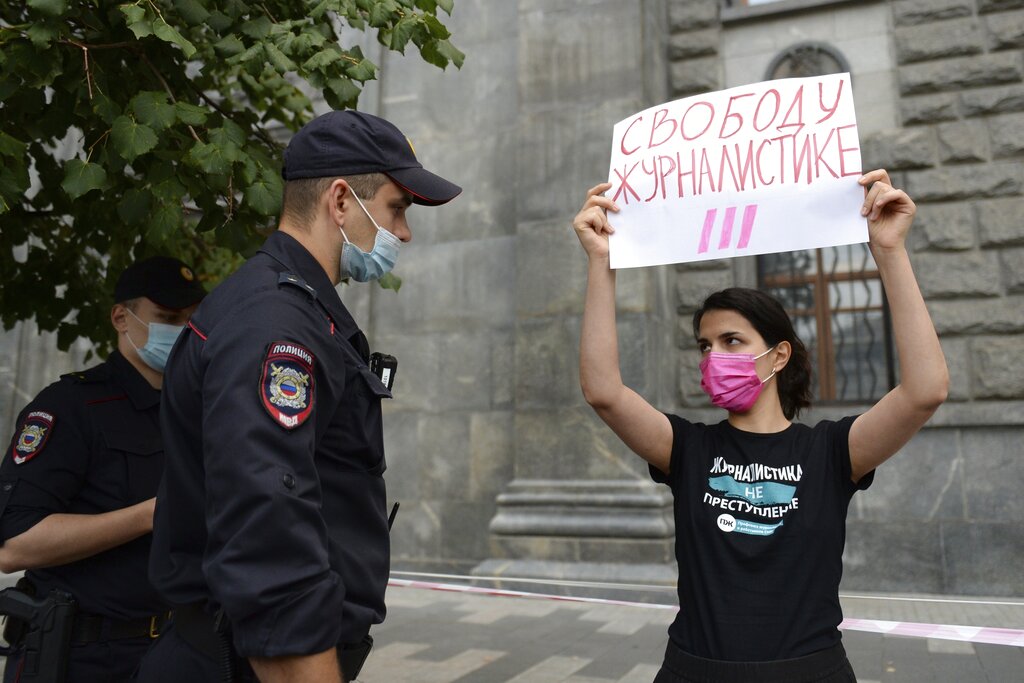 As delivered by Ambassador Michael Carpenter
to the Permanent Council, Vienna
November 3, 2022

Representative Ribeiro, dear Teresa, we warmly welcome you back to the Permanent Council for the 25th anniversary of the mandate of the Representative on Freedom of the Media.  This milestone comes at a time when the importance of your work is clearer than it has ever been before.  It is especially relevant given that just yesterday we commemorated the 10th anniversary of the International Day to End Impunity for Crimes Against Journalists.  A free and independent press is crucial to democracy by holding leaders accountable to an informed citizenry.  Where an independent media is under threat, democracy is at risk.  Where independent media is absent, there is no freedom.   Unfortunately, as you noted in your report, in the OSCE region, “the picture is bleak, yet clear,” and the examples of this disturbing state of affairs are many.

Journalists have been among the many killed during Russia’s war of aggression against Ukraine.  The Committee to Protect Journalists has documented 35 journalists and media workers killed in Ukraine since Russia’s brutal full-scale invasion on February 24th of this year.  This includes people like Zoreslav Zamoysky, a citizen journalist killed on a street in Bucha, and well-known photojournalist Maks Levin, who is reported to have been interrogated and tortured before being executed in March of this year.  Since Russia’s seizure and occupation of Crimea in 2014, journalists, media workers, and citizen journalists have been harassed, detained, arrested, prosecuted, and imprisoned as a direct result of their reporting, including RFE/RL correspondent Vladyslav Yesypenko.

Repression of the media within Russia itself has been a major aspect of the Kremlin’s war strategy against Ukraine.  The recent Moscow Mechanism report documented the ways in which repression in Russia is linked to its aggression against its neighbors.  As you so rightly noted in your report, in the past year the Kremlin has worked to silence independent media voices.  Among other things, stripping Novaya Gazeta of its registration and forcing the closure of its website; accusing journalists in Russia who report truthfully on the war of treason; and attempting to deny Russia’s citizens access to accurate information about the war their government is waging against Ukraine and what’s happening to their own soldiers.  Russia has manipulated its laws to “create a climate of fear and intimidation.”  As a result, virtually all vestiges of independent media have been closed or left Russia, leaving only propagandists to spew the Kremlin’s line.

In Belarus, the Lukashenka regime has imprisoned at least 32 media workers since the fraudulent 2020 presidential election and continues to hand out increasingly harsh sentences against those exercising fundamental freedoms, including freedom of expression.  Most recently, Chief Editor of independent news website Yezhednevnik Siarhei Satsuk was sentenced to eight years in prison on politically motivated charges for his reporting on corruption.  This is a pattern we see in a number of participating States, with increasing political, economic, and legal pressures on the media.  Thank you for calling attention to these problems.

In our region, both state and nonstate actors spread disinformation to further their political objectives.  Countering disinformation is no easy task, particularly when we seek to respect freedom of expression.  We share your concern about recent laws in several participating States meant to counter disinformation but written in a way that could allow for arbitrary and politically motivated actions against journalists.  The laws such as these could lead to censorship, including self-censorship, and be applied, as you noted, “at the expense of free speech and media pluralism.”

Finally, we must do a better job of ending impunity for those who commit crimes against journalists.  We join you in your call for full accountability for the murder of Maltese journalist Daphne Caruana Galizia.  Your initiative to help us better understand the problems related to the safety of journalists will help us safeguard their protections for the future.  We look forward to the practical toolkit you and your team are preparing as well as learning more about how we can support the safety of journalists across the entire OSCE region, including in my own country.

Much has changed over the last 25 years as you have noted.  Online journalism has gone from a fringe outlier to the primary mode of information consumption.  The methods have changed, but the principle remains the same.  As Secretary Blinken has said, “A free and independent press ensures the public has access to information.”  Without this knowledge, citizens cannot hold their governments accountable to ensure their fundamental freedoms are being respected.  Representative Ribeiro, dear Teresa, thank you for your work to empower citizens by supporting independent media and the journalistic profession throughout the OSCE region.